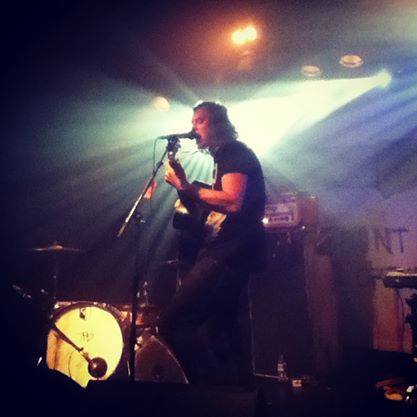 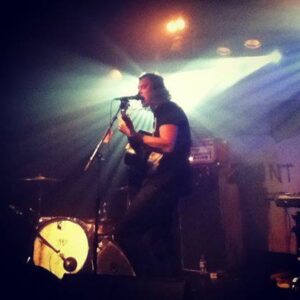 The pop-punk/emo revival of the last few years has left a bitter taste in the mouth’s of purists, yet in spite of this, many bands still capture the hearts of fans in much the same way as those bands from the mid-to-late ’90s. One such band are The Front Bottoms, whose incendiary live show impressed Louder Than War’s Bianca Sarafian.

Queuing outside of The Garage, London, it was easy to notice something interesting about the soon-to-be audience for this gig. There was a common denominator between the tipsy lads slurring down their last can, and the Tumblr-Teens in their Tie-Dyed Tees:

The Front Bottoms. TFB. Not so popular that pedestrians know their name, with the acronymic reply to the inquisitive “Who are you queuing for?” being met only with nice smiles and shrugs – but so loved, that when the doors open, there is nothing short of a clamber to get to the barrier inside the sweltering venue.

The general consensus for the support band, PUP, was “Who?” The Canadian pop-punk quartet were largely unheard of in the audience- and they knew it. Their set was a punch to the gut, electrifying reverb and absolutely contagious energy. The stage exploded with catchy guitar riffs, humorous banter between songs, and blindingly raw vocals from the band’s front man Stefan Babcock. They burst through songs like Guilt Trip, and their latest single Mabu, leading to an amazing climax on their song Reservoir, which had the entire audience – who began their set with folded arms and open twitter feeds – screaming and sweating along.

The fifteen minute break between bands did nothing to subdue the energy that PUP had left behind. The perfect opener, I feel, for The Front Bottoms, who had no problem at all escalating the audience’s vibe from ‘Suitably Pumped’ to ‘Borderline Insane’. As singer Brian Sella took the stage, he was met with deafening screams, and yes, even the clichéd “I love you” from a premature voice. As the set began, the crowd closed in, jumping and yelling to even the acoustic songs. There was a great sense of unity amongst the diversity of the fans in the audience, because – truly – each fan was a die-hard, screaming the words to songs such as ‘Lipstick Covered Magnet’, ‘Maps’, and ‘Father’, some even crying in their excitement. Brian’s voice croaked and bellowed at it’s absolute best, and throughout the set the whole band was unsurprisingly on top form. The energy was red-hot, with the audience finally exploding on ‘Twin Sized Mattress’. Truly an incredible performance from a band with flawless consistency.

The Front Bottoms put on a faultless show, and it’s a guarantee that if you get to see them, you’ll have a blast – but a special mention has to be made to PUP, who made a fan base out of just about all naysayers in the audience in just thirty minutes. An incredible gig from two of the most exciting bands on the Pop-Punk Circuit right now.

All words by Bianca Sarafian. This is Bianca’s first post for Louder Than War.