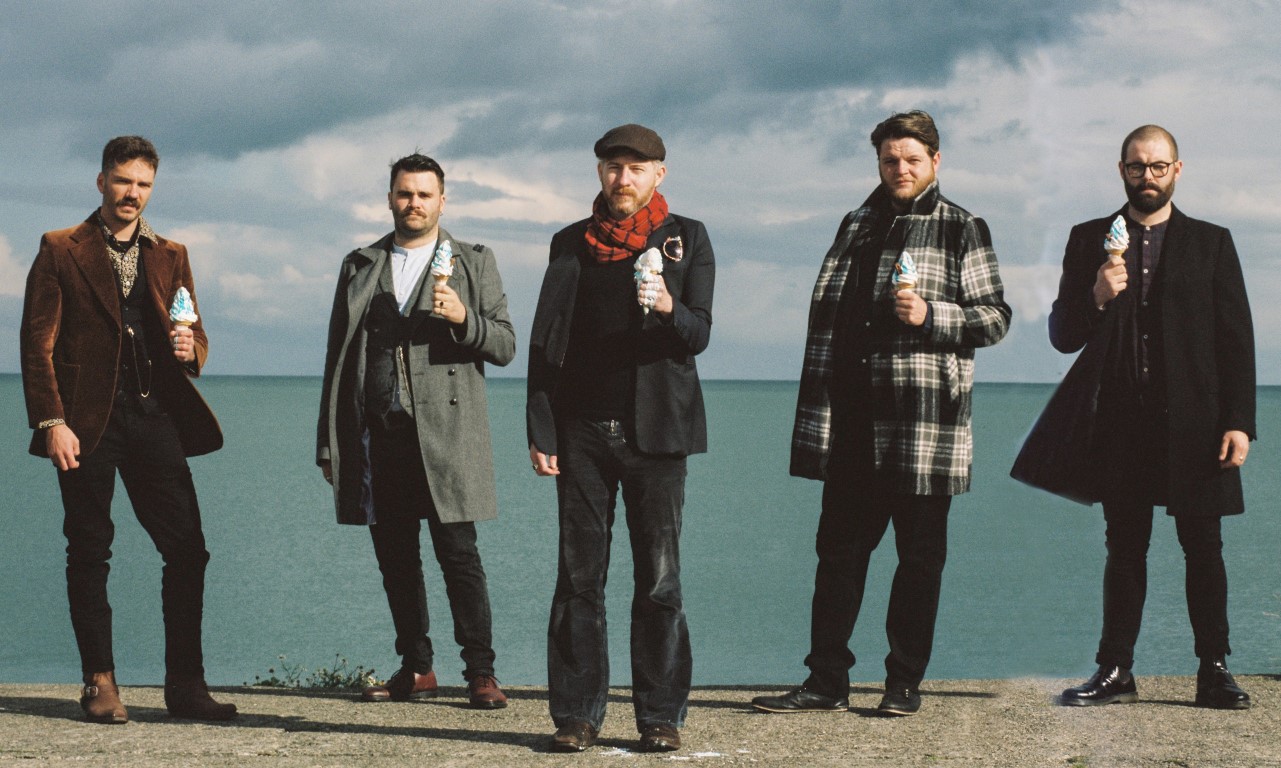 Having encountered The Eskies ripping it up with their ecletic brand of passion filled and folk fired music at a couple of festivals this past Summer and recently getting a taste of their new album Don’t Spare The Horses, Louder’s Mike Ainscoe got the chance to fire some questions at Sean O’Reilly, singer/guitarist with the band.

For anyone googling Eskies, you find all sorts of links

“Esky is an Australian brand of portable coolers.”

Louder Than War: …appreciating that you enjoy a little humour and the occasional wind up, what is the actual story behind the band and the name?
Sean O’Reilly: I recommend making one up. It’s great fun and the actual story is just way too boring. Seriously its really, really boring.

LTW: So with And Don’t Spare The Horses imminent, how was it when it came to make ‘the difficult second album’?
S O’R: It was a bit mad really. We probably had three songs written and finished that we knew would go on the album, and then loads of other bits of music and ideas hanging around. Stuff that we’d been playing with in rehearsal but that certainly weren’t formed songs. So, we booked the studio without having the album written and that put a bit of pressure on us to get it finished to a deadline, which was pretty exciting at the time. Going into the studio and hearing the songs come to life there and then added a certain charm to the whole experience.

LTW: The actual album title is a great phrase, sums up the band (and the album well for me) and picks up nicely from After The Sherry Went Round. Not really a question but open to a comment…or not…
S O’R: Yeah absolutely. It kind of sums up the attitude of the band and our music. If something is worth doing, it’s worth doing well. We’ve always been like that. Never spare the horses!

LTW: And along the same lines, I wonder if ten years down the line we’ll have a number of similarly titled albums from The Eskies? Maybe you even have a list on the go…?
S O’R: Haha, no unfortunately not. There is no list. Hopefully in years to come there’ll be loads of The Eskies albums, but I’m sure us searching for the right title will still be as painful as ever..

LTW: The design is also following a similar style from Joanne Kiely. Are we talking a bit of a familiar theme again with the look?
S O’R: You’re absolutely spot on, yeah. We had it in our minds that it would be a follow on from After The Sherry Went ‘Round, at least where the artwork was concerned. We love the look of old books and in particular, series of books. Imagine a shelf in an old home or library with leather bound books covered in dust and that’s where we’d be. Joanne is an absolute gem, who is totally on our wavelength. It was always going to be Joanne who translated our mindless scribbles into a piece of art.

LTW: Why did you pick All Good Men as the single and opening track for the album?
S O’R: The reasoning behind that was that it’s The Eskies in a nutshell. It has the quiet and the wild all in one package. It crashes in from the off as if to say we’re right back doing what we do best. It’s full of energy and who doesn’t want that feeling from an opening track on an album?

LTW: Are there any of the songs you’re particularly pleased with for any particular reason? I’m wondering if you felt that something like Death To The Sentry took things in a different direction…
S O’R: Well, obviously we’re biased and think the whole album is great! We’re really pleased with it but I suppose now would be a bad time to say if we weren’t! We love the raucous stuff that we’re best known for but with this album there wasn’t that sense that we need to fill a live set with upbeat, dancey songs. Partly because we’ve been doing that for years and had a pretty good live show in the bag. That gave us license to go and try out some softer, more quiet songs like Death To The Sentry, Building Up Walls and Hail, Hail and I’m glad we were able to show that side of us on this record.

LTW: What was the recording plan for the album? Do you have the luxury of studio time or is it more like have the songs ready, get in, record quickly and get out?
S O’R: I think that was certainly the case with After The Sherry Went ‘Round but with And Don’t Spare The Horses, it was very different. Our producer and good captain, Gavin Glass, had joked that “there’s no producing to do with you lads”. That came from the first album being written, arranged and well run before we recorded it but this one really came to life in the studio. Gav is a great producer and just a great bloody guy who knows his shit. He lives in the same weird world as us and certainly had his work to do on this album.

LTW: I love the ‘Up The Parish’ tagline…
S O’R: Up The Parish is a rallying cry to the community of people who have joined us on this mad journey. It’s a unifying statement that says we’re all in this together. All for one and one for all.

LTW: Having seen the band play festivals this year, you’re obviously at home on the bigger stages and with festival crowds as well as the smaller clubs. Does the venue/crowd size make a difference?
S O’R: We’re comfortable on any stage, I think. I could say that there’s absolutely no difference but I think that would be wrong. To be honest, festivals and venues are different but we totally embrace their differences. There’s no point in treating them the same way. Especially if you’re playing a main stage at Cambridge with thousands of people there and then a small venue with a couple of hundred the next night. I hate going to watch a band that have a pre-planned show that they go ahead with in any scenario. It’s 100% embarrassing. You have to adapt to the crowd and the venue and the buzz around the place.

LTW: Finally, have you anything else to declare?
S O’R: Come see us live. Buy our albums. Oh, and Up The Parish!