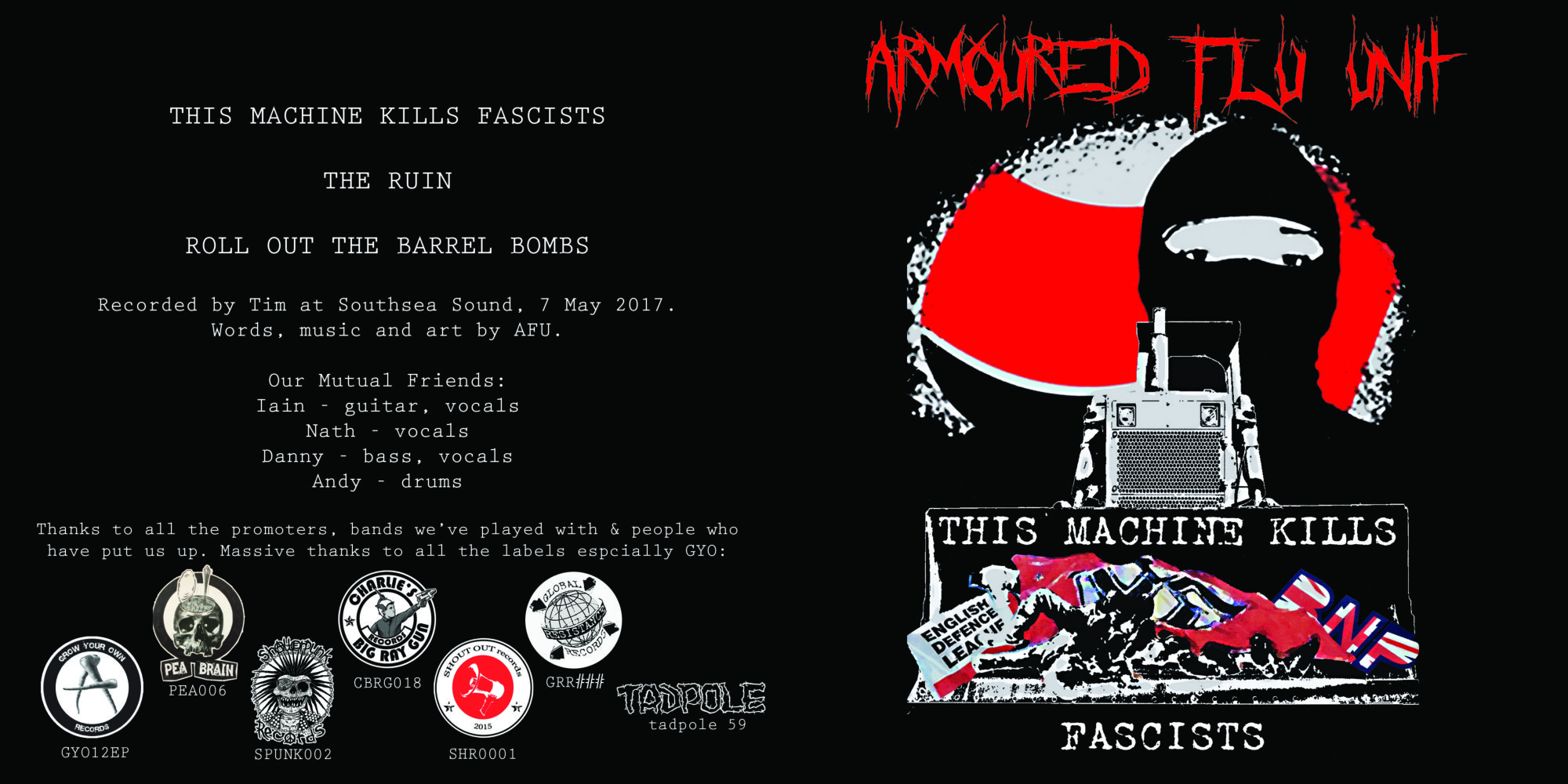 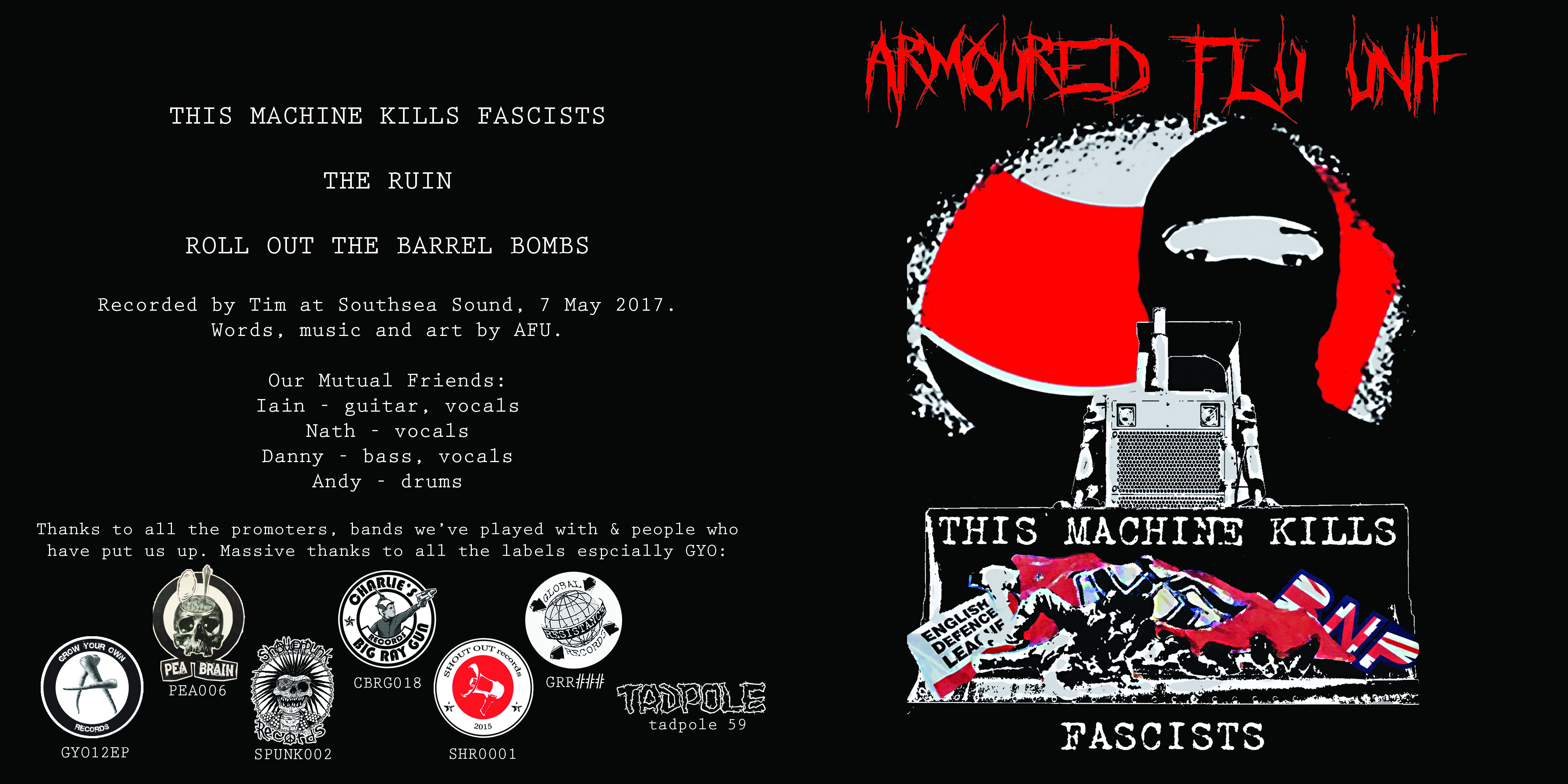 Coming together a couple of years back and with a collective history in such battle-hardened Punk stalwarts as Haywire, The Alternative and the Good Time Charlies to name but a few, Armoured Flu Unit have since that time cut a stylish but gritty swathe through the Anarcho Punk gig scene. Their live performance is the kind of “taken up a notch or twenty” Blitzkrieg Bop that just won’t stop; short and sharp blasts of mayhem, laced with singalong/shoutalong choruses that lodge themselves quickly in your synapses. Nath is a natural frontman infuses knockabout humour with the political points and Andy, Iain and Danny present a brutal but winning musical combination. Their gigs keep getting better and better.

A criticism of Anarcho Punk that has often been levelled is that the message takes precedence over the musical backing, but with AFU there’s a neat balance between the intelligent and informed lyrics and the raging beat. I’ll whisper it, but in my opinion Punk in 2017 can be pretty hollow sounding and wishy washy, Woo Hoo backing vocals papering over a multitude of sins. But on the evidence available AFU do not fall into that particular trap, by total commitment to their causes and playing what is plainly exciting, vital music with no filler required.

This new waxing takes things on further from their previous EP, with a slight change of tack towards longer blasts of controlled energy. On the title track things are clear – the creeping comeback of fascism will not be tolerated and more than that it will be actively confronted. The words that graced Woody Guthrie’s guitar are shaped into something a world away from post-US Depression Folk, but it is the same basic point, music being one tool to fight the forces of oppression. It is expertly pressed into service by Armoured Flu Unit here.

Roll Out The Barrel Bombs juxtaposes moody instrumental passages with blasts of raw hardcore power. Subject-wise it focusses on media outlets ignoring the pain and suffering being inflicted on folk in other parts of the world by promoting empty celebrity culture – it’s the kind of sleight of hand that is pulled on the general populous every day, giving huge importance to the trivial so to occupy people’s brains and stop them asking real questions.

The Ruin skilfully critiques the fact that the historical sites in the UK are increasingly moved over into the hands of private enterprises. These operators wish to limit access to things which were once more or less common ownership and not forgetting the price tag for viewing slapped on top to transparently chase profit. This deviates nicely from usual “Punk” lyrical concerns but cleverly pinpoint a fact that’s ignored during the modern day. It’s yet another way that Joe Public gets shafted without even really knowing about it. The unusual subject matter (for a Punk song) is complimented by music which is a terrific blast of raw power too.

Put simply, this EP is the best example of catchy hoarse noise I’ve heard since early Blitz or the State Violence/State Control single by Discharge. But that’s the past. In the present you won’t hear a more invigorating noise, or more on-the-nose critique of modern misinformation. “Nazis are no fun”, as the old Rock Against Racism/Anti-Nazi League saying said. Armoured Flu Unit are a whole bundle of the stuff and this EP is just part of the overwhelming proof.