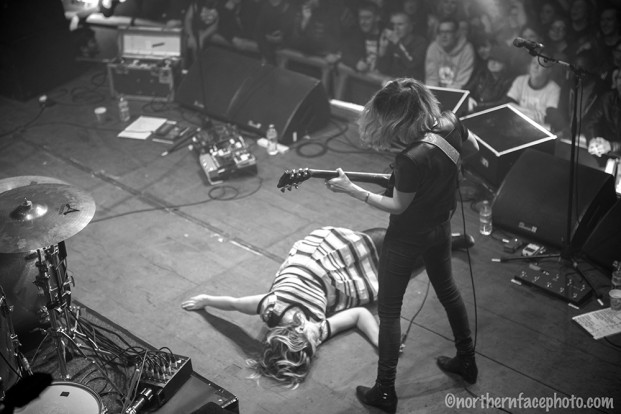 Photo of Sleater-Kinney above and all others on this page © David Gleave.

Sleater-Kinney’s eagerly awaited UK tour is currently under way having started in blazing fashion in London on Monday. Louder Than War’s Nigel Carr (words) and Dave Gleave (photos) were at the second date in Manchester last night and they report back in full below.

Nineteen ninety four was a landmark year in popular music, not only did it see the end of Grunge as we know it when Nirvana front man Kurt Cobain took his own life, but it also birthed Riot Grrrl, a genre of indie rock music dominated by all female bands and bands with a feminist punk attitude; bands like the awesome Sleater-Kinney.

The group normally plays as a three piece, unusually without a bass guitarist, but tonight, however they are augmented by Katie Harkin from Leeds group Sky Larkin. She not only adds yet another guitar but also fleshes the sound out with keyboards and even a tambourine.

After nearly ten years away this is a hotly anticipated comeback for the band. The venue is a crumbling old Victorian hall with stained glass windows and the great and the good of Manchester are in attendance. It is absolutely packed to the beautifully arched, moulded ceiling with the crowd in the auditorium squished together shoulder to shoulder.

The band go crashing in to Price Tag, the opening track from the new album with Harkin hammering out an accompanying primeval beat on a pair of floor toms left of stage. This gives the song an amazing energy, with Carrie Brownstein’s fractured guitars and Corin Tucker’s  intensely searing vocals. The song is a cracking opener and the perfect springboard for tonight’s aural assault. 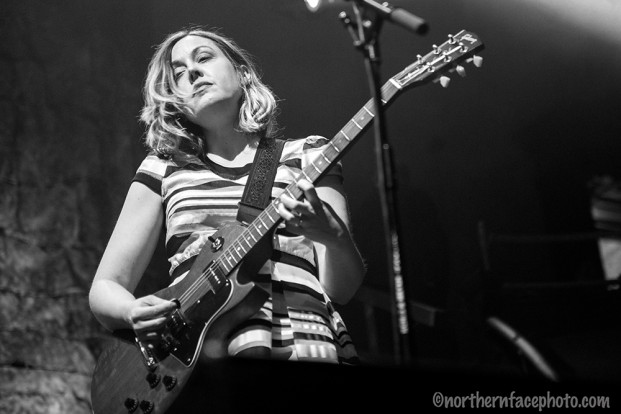 Tonight’s set is mostly a mix from the recently released album No Cites To Love and the previous one, The Woods, from 2005. It will take a few more listens of this new album to achieve the same level of recognition as its predecessor. They launch in to ‘Oh’ which sees Harkin fleshing the sound out with swirling keyboards and the crowd go mad – quite a feat in the confined space in front of the stage.

‘Surface Envy’ off No Cities opens with a Fall type riff and I’m pretty sure they have been studying the band’s early music whilst putting this new album together. It’s those almost naïve descending guitar scales that sound so familiar. Carrie Brownstein plays amazing rhythm guitar on this, strutting and dropping her head like a cross between Wilko Johnson and a robotic rag doll pulled around the stage!

One Beat opens with a drum pattern that’s reminiscent of Metal Postcard by Siouxsie and the Banshees, then it breaks and reaches stratospheric levels with Tucker’s incredible vocal; it’s remarkable that the stained glass windows are still in one piece by the end of it! 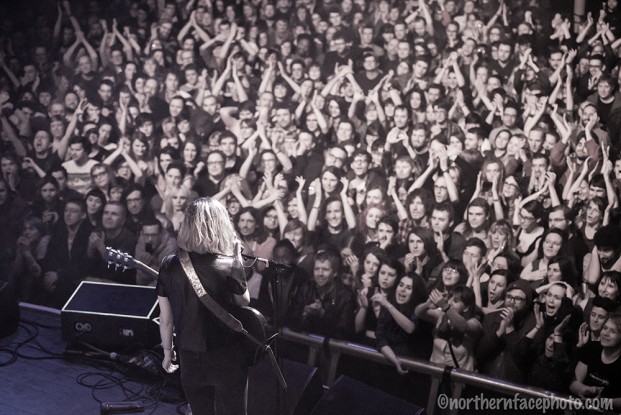 During the middle of the gig there is a strange period of calm and quiet from the audience, possibly down to the unfamiliarity of the songs. No Cities to Love, the title track off the new release is intense, riff laden and melodic but this and the following few including No Anthems, which starts in the dark with a hypnotic drum solo from Janet Weiss, sweeps over a largely silent audience, all bar a brief spark of enthusiasm during the choruses.

Then they are back in the room and the brief lull is over as the storming One Take from 1997’s ‘Dig Me Out’ blasts out with Tucker’s screeching vocal underpinned by Brownstein’s undulate support. The mood continues and they close the main set with Jumpers, a storming track which builds and builds to a frenzy of guitars, Brownstein attacking front of stage, hacking away at the audience. The crowd in front of stage is in ecstasy flailing around with abandon. 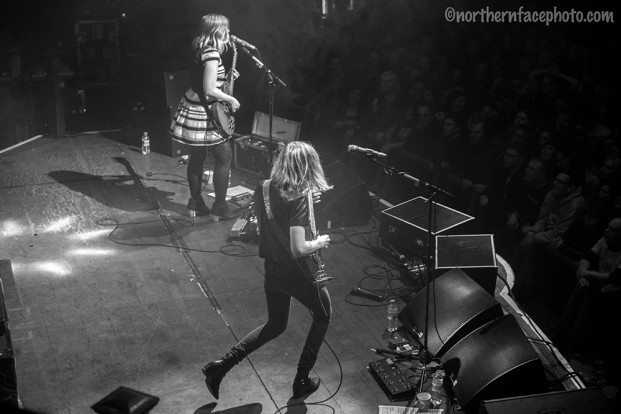 The crowd go mad, stamping their feet as Tucker leads them back on stage for the encore. She takes the opportunity to address the audience:

‘Thank you Manchester, we are so happy to be back as a band thing, I know things have changed a bit, but – Give it up!, Give us respect, Give us equality!’

She grabs the mic, dedicates the song to Sonic Youth’s Kim Gordon, (who supported them with Body / Head in the US), and launches in to Gimme Love with Harkin in support on rhythm guitar. The chorus is incredible with Brownstein almost yelping, ‘Rock Lobster’ style backing under Tucker’s piercing vocal, she drops to the floor rolling around the stage in pure abandon. 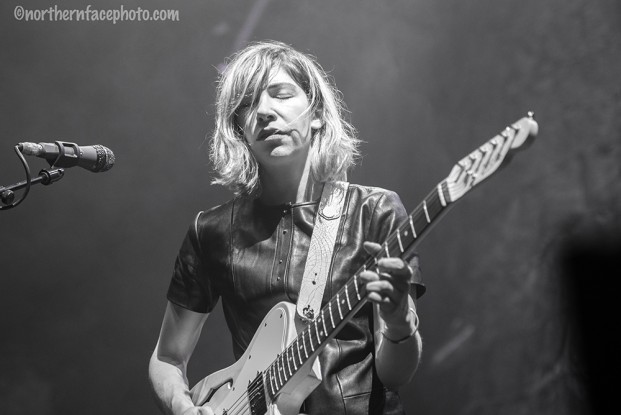 Tucker and Brownstein duel guitars and fluff the opening to Modern Girls which transforms in a real stand out track with Weiss’s support on harmonica. It’s an unusually quiet and melodic piece, the kind you expect to see at the end of the set, a true ‘Bedshaped’, Glastonbury moment with the crowd singing along and everything is good in the world.

They close with the raucous Dig me Out and the crowd are on their feet all over the auditorium. Its a spectacular return for Sleater-Kinney, the quiet moments forgotten and they leave the stage to rapturous applause and appreciation.

Buy No Cities to Love from Bandcamp and read our review of it here.