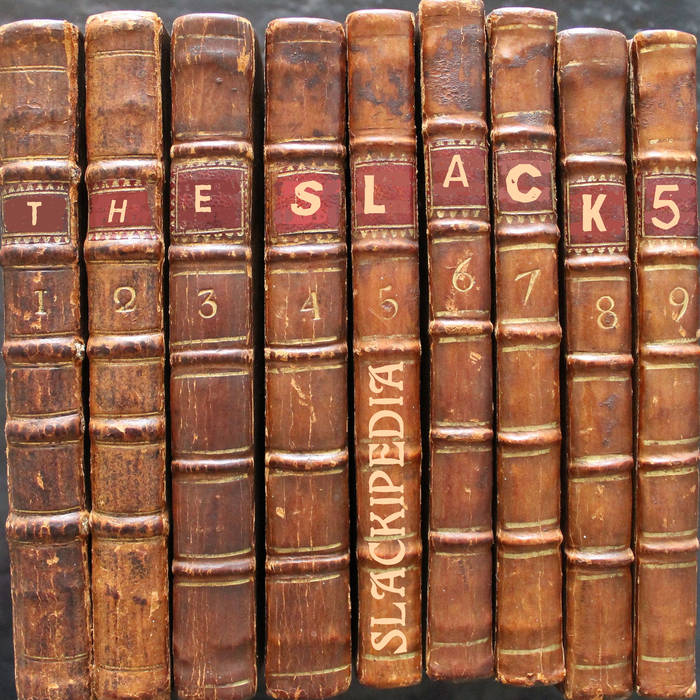 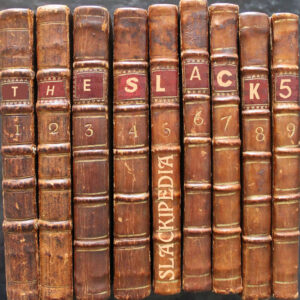 The Slack 5: Slackipedia  (self released)

Having a  song called ‘Home Taping Is Killing Music’, mentioning Logans Run in another  and singing lines like  “You can’t make a frisbee out of an MP3 / It baffles me, that we’ve got 500 channels but TV was better when there were just 3”  – all leads me to the conclusion that the Slack 5 are not a bunch of teenagers.

This is a self-deprecating Mid-Life-Crisis, ‘Nostalgia Aint What It Used To Be’  classic Indie Pop meets Brit Pop album for pop-kids reaching 40…something.

The centrepiece of Slackipedia is a great song called  ‘Too Old To Die Young’ on which 44 year old singer/guitarist Stuart sings  “The great all died at 27, for us it’s a distant memory..”  Despite the middle-aged angst the music is spritely, classic indie-guitar rock’n’roll which recalls the misfits and also-rans who have been written out of the Britpop narrative dominated by Blur-and-Oasis…. bands like Cud, David Devant & his Spirit Wife and Bennet.

The Slack 5 count Cud as one of their ‘influences’ along with “The Cure, The Smiths, My Bloody Valentine and all sorts of other things” . They pigeonhole themselves as “Funk & Jangle, Art Rock, Shindie, Post-punk” and are consist of  Stuart Powell  (44, from West Wellow – home of Esther Rantzen’s country  retreat) Flavio de Oliveira (a youngster at 33, from Brasilia, Brazil) and Simon Nightingale ( 39, from West Sussex).  They sing about everyday irritations like “Getting stuck in traffic and being put on hold”  and have modest ambitions per their social media account (they are) “here for their own amusement and to make your feet tap.”

Which is underselling themselves…. because they are a musically deft, lyrically witty, intelligent and melodic band who write far, far better songs than 95% of younger so-called Indie guitar bands (funded by major-label money).

Based in Southampton, Stu and Flavio have been together since October 2010, Simon joined the band in early 2015 after their first bass player left. They’ve played around the South and London and this is their third album.  Stuart is  the main vocalist/lyricist but Simon sings on ‘All in your Head’ and ‘Throwing It All Away’- which are two of the most…. tries to find the right word… emotional, soul-bearing songs on the album. The former is particularly effective detailing how non-sufferers dismiss depression.

The title track which opens the album gives the wrong impression initially as its up-beat and very Franz Ferdinand-sounding. the following The Highway Code reminded me of Blur at first and then Bennet (of Mum Has Gone To Iceland ‘fame’).  Fleeting similarities to the Wedding Present and Sleeper whizz by but by the time you’ve heard the album all the way through the Slack 5 do have an identity of their own.  Part knowingly wallowing in nostalgia and what-could-have-been and part kick-ass and carry-on rocking self-therapy.

In  ‘Too Old to Die Young’ the Slack 5 say “Internet has killed creativity”   and in Post Nostalgia, “the geeks inherited the earth” – which does makes them sound like grumbling old Luddite farts – but at least you can dance to them and sing along as you scratch your chin, pull in your gut and think, ‘they’re right y’know’.

For a band who are ‘outside’ of the industry. the Slack 5 have made an album which they are rightly proud of and is very accomplished and articulate – and deserves to be heard by 40-something Carter USM-Britpop fans from all-over the country, not just the ones in their catchment area.