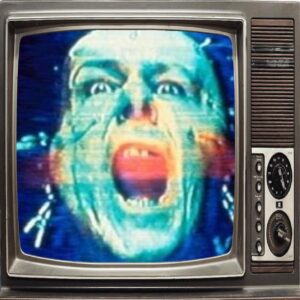 Louder than War’s Ioan Humphreys has a listen to uplifting and prime Welsh electronica in the form of Radio Europa.

To Repel Ghosts is the brand new album from Welsh electronica duo Radio Europa. A year in the making, To Repel Ghosts was recorded throughout 2017 in Radio Europa’s Steven Leigh’s home studio. Lead vocalist and lyric writer Simon Tucker decided to pull back on his previous style of vocals, only appearing in segments and sometimes not at all. The band wanted to try and expand their sound from their previous releases with a more striped down basic style and create an album that was bigger in scope.

This is the bands first release on Welsh DIY label Recordiau Prin with label head and fellow noise artist Ash Cooke also providing the albums artwork. Album opener The Curse Descends is fidgety and glitchy with finger snaps sampled to perfection. Criminally too short! Still, the 35 seconds we do get is brilliant and the distorted MES inspired vocals and creepy laughter prepare us for what is to come across the rest of the album.

Fake News begins with Max Von Sydow’s dialogue from The Exorcist warning the doomed Damian how best to converse with the devil, without anything said being twisted or used against him. Fake news summed up right there folks. Throbbing electronica with Tucker’s instructional vocals over the increasingly repetitive industrial beat. Clever as fuck. Blissed out electronica  start Babbling Tongues and repeats throughout this gloriously laid back track. This soon morphs into gorgeous, yet melancholy chord changes with an insistent metallic clanging beat that drives and relentlessly pummels. It’s strangely unsettling, yet beautiful in its simplicity.

Post Update is one of the standout tracks with its quiet, finger snapping backdrop that soon lays waste to the vitriolic and bile drenched spoken word delivery of Tucker. Railing against small town minds; Social media opinions; Tucker has an armoury of targets in this post brexshit world we currently live in. Fake news doesn’t escape Tucker. He is battling a nation of trolls repeating, “If I write it, it’s true!”  It Knocks is another Tucker rant filled track again about small town minds. Frustration. Politics. The right. The left. Replete with the perfect line “too right it’s ok to smash a nazi in the face” All against a backdrop of minimalist instrumentation and what appears to be four notes on a glockenspiel. Another standout track on this uncompromising album.

Chasing Ghosts is based around  a gentle piano sample and Tucker talks vividly and in a visceral way about suicide attempts and “pain in the arse glass half empty” drinking problems. This is all against the repeated Exorcist dialogue sample of “I’m a catholic”. Is this a prayer for redemption? Or a rejection of faith? Either way Tucker is painfully and refreshingly honest. Follow up ‘The Belly Of The Beast,  has more blissed out electronica and noise interlude that surely acts like an intake of breath in-between the vitriol and bile that the vocals have hinted at so far.

Tearing Off The Scab  has quieter, unassuming stabs of electronica and a glitchy intro to the penultimate and brilliantly titled track  Scattered Transmissions from the Fuzz Sewer. This track is again full of Tucker’s personal and intimate reflections of his own mortality and feelings, set against a beautifully sensitive musical accompaniment. And by the time the final track Trusted Goodbye and its shimmering piano led outro that perfectly bookends the entire album ends, I am left with an overriding feeling of calm and optimism. Any anger or frustration has been dealt with by Radio Europa, and yes, there are awful things happening to people in this country and others. But, there is hope. And there is kindness out there. And despite the bile and anger, Radio Europa wear their hearts on their sleeves, and want desperately for a better world. Amazing uplifting stuff.

Listen in on Bandcamp here

To Repel Ghosts is available now on Recordiau Prin who are themselves are at the forefront of the experimental music scene that is currently exploding in Wales.