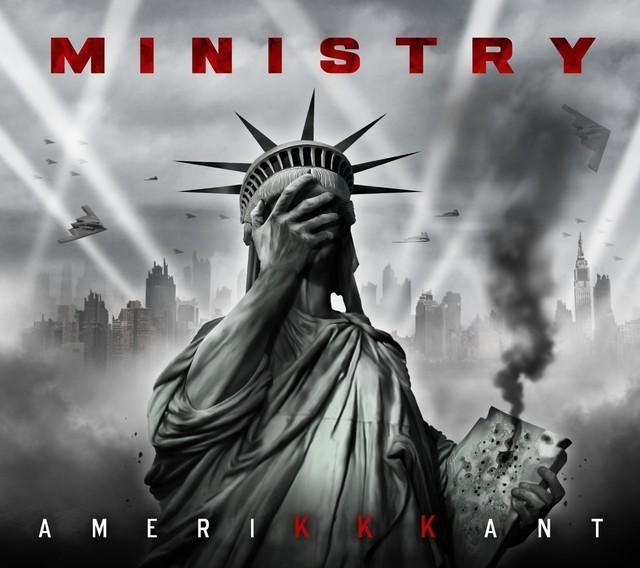 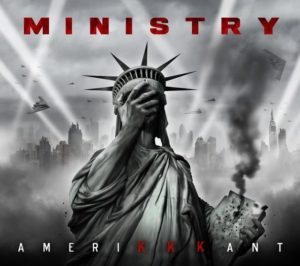 Ministry, the forefathers of industrial metal, are back with a fresh slab of driving guitars, voiceovers and clips from movies and newsreels. Is there anything new here or is it just more of the same? Neil Johnson takes a listen.

It wass 1992, it was a Saturday night and I was thoroughly enjoying the mosh pit at Derby Rockhouse. As memory recalls, the DJ was introducing us to Symphony of Destruction from Megadeth’s latest release, Countdown to Extinction. The song finished and, rather than flowing into the next track, there were a few seconds silence to predictable shouts of “SLAYER!”… but what followed was a voice talking.

“Soon I discovered that this rock thing was true, Jerry Lee Lewis was the devil, Jesus was an architect previous to his career as a prophet. All of a sudden, I found myself in love with the world, so there was only one thing that I could do, was ding a ding dang my dang a long ling long.” Then the raging, repetitive guitars of Ministry’s Jesus Built My Hotrod sent the place insane. It was the first time I had heard them and I promptly started searching my local record shop for the album Psalm 69 the next morning.

Psalm 69 was actually the fifth record from Ministry. They started in 1983, but previous releases had been very different stylistically. Psalm 69 was full of absolute monster songs, N.W.O, Jesus Built My HotRod and Just One Fix. It was fresh-sounding, brutal, political and funny. Everyone loved Ministry, from metalheads to pop fans. They were just uber-cool and the songs were perfect for the feeling at the time.

Moving on some twenty-six years (honestly, where did that time go?), they have established themselves as the fathers of industrial metal and released fourteen studio albums (ok, twelve real ones). There have been ups and downs, but each and every release after Twitch has been full of rage and anger. AmeriKKKant is their latest addition, which continues the established ‘industrial metal, rage and samples’ recipe.

The album kicks off with a time-honoured Ministry tradition; This time, it’s Donald Trump’s “We will make America great again,” twisted and contorted with laughter, electric violins and samples warping over each other, steadily building but never quite lurching into full-on Ministry rage. Twilight Zone slams from the outset, a classic Ministry riff, with more Trump samples and voiceovers. It’s as Ministry as it gets, powerful and brutal, but slightly slower than some of the previous records.

The rest of the record continues in the same vein. Victims of a Clown continues with the slower pace, bringing a gorgeous bass groove. TV 5/4 Chan is a mixture of intense blast-beats and samples, before tearing into We’re Tired Of It, which is brutal fast thrash, Slayer-like with samples woven over the rhythm.

Wargasm is back to the slower, heavier riffs and samples, driving guitars building a wall of sound and then a raging chorus that kicks in – one of the album’s strongest points. Antifa and Game Over carry on the same trend, with brutal guitars, massive riffs and samples woven over the top. AmeriKKKa is eight-and-a-half minutes of slow, repetitive industrial metal with soaring guitars and samples. The repetition and layers are stunning.

This is a real return to form for Ministry. I’ve read other opinions that say that this record is just Ministry doing what they do and it’s hard to argue with that. However, it feels a bit of an injustice to describe it that way. Sure, this is Ministry, but its Ministry doing what they do as well as we’ve ever heard them do it. 2013’s From Beer to Eternity felt like a watered-down version of Ministry; that sounded typically like Ministry but missing something. AmeriKKKant sees the band back on form, brutal, powerful and political.

All words by Neil Johnson. More writing by Neil Johnson can be found at Neil’s archive. Neil is also on Instagram as @gigtog and has a website here: https://www.neiljohnsonphotography.uk/