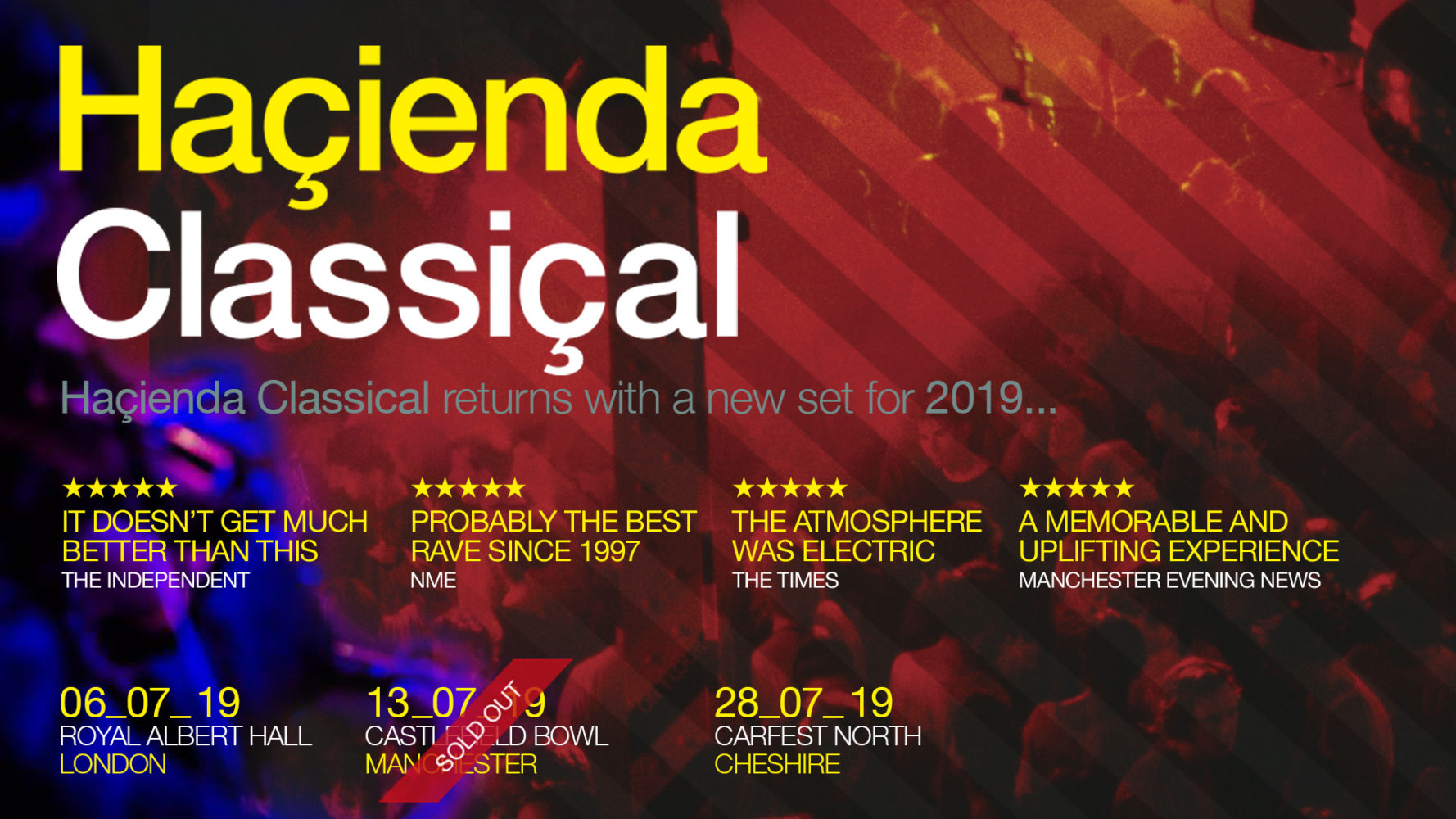 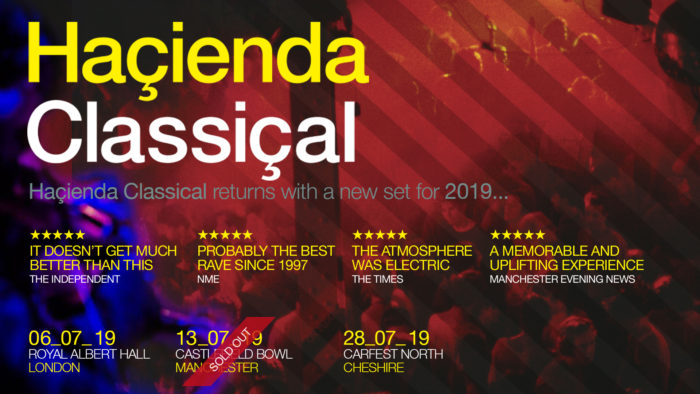 When people mention the Hacienda, images of all-night raves, substance-fuelled antics and cutting-edge music spring to mind. All this, despite the fact most of that aspect played out 25-30 years ago. Before that it was the venue in which many acts of the day (mid 80s) served their apprenticeship. Whatever else happened or however many wild claims there have been and will be, it was the music that it was ultimately about. Nostalgia, and the distance from events which create it, is a funny thing. Few people ten years ago, if asked, would conjure up the image of an orchestra, delicately re-creating the sounds that they strutted their stuff to and spent nights they’d either never forget or be able to fully remember – usually one and the same thing.

Fast forward to now – as well as those who were there at the time, an entirely new generation do associate dance music and classical as not just compatible, but an ideal partnership. The success of the Hacienda Classical is testament to this; a collaboration of Hacienda-era artists, DJs, producers and the Manchester Camerata Orchestra. If nothing else, music has the power to break down boundaries and barriers, bringing people together in ways that nothing else can in quite the same way. Whilst there’ll be some that say the set-up is a mismatch, or is refusing to let go of the past, the concept is forward thinking, with innovation at the heart of what they do. A busy and active outfit, Hacienda Classical are currently touring and the good news is there’s tickets to be had, for the upcoming gig at the iconic Royal Albert Hall show in London. 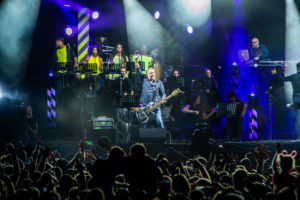 This summer has been a busy one already, with the outfit’s Scarborough concert played at an open-air theatre, seeing them perform to a massive crowd of revellers old and new. Though built on collaboration, anything that truly manages to capture the essence of The Hacienda will always benefit greatly from one of its heroes being present; someone who knows better than most the unique atmosphere being evoked. With that in mind Louder Than War spoke with Peter Hook, who recently headed up Hacienda Classical’s set at the Isle of Wight Festival 2019, stoking the fires of an already scintillating crowd, ready as ever to party. He’s helping keep the summer vibes flowing too; luckily it’s not too late to get your dose of this incredible experience. Get booking your ticket (they’ll surely go soon) for your chance to be part of things at the Royal Albert Hall gig on Saturday 6th July 2019. Whilst that show has the benefit of guaranteeing you’ll not get rained on, many will likely be soaking anyway in sweat, at the end of an evening’s shape-throwing antics – just as Hooky likes it.

Louder Than War: Before Hacienda Classical had you ever worked with an orchestra?

Peter Hook: Only once, with a full orchestra: a Manchester vs Cancer gig, alongside James who were there that year too. I didn’t realise the discipline involved in that style of performing. When the score stops so does the orchestra – there’s no improvisation or jamming with an orchestra. Not that that’s any type of criticism, that’s just how it is. At first you feel a bit of a fraud, even as a professional musician, like you’re winging it. Very few musicians I know – and I know a few – can read music. They’re just different styles, and I really realised quite how much; saying that, not so much that they can’t do well together, as proven. I do love a challenge.

As a producer, as well as a recording artist, what do you feel this set-up has brought to already classic tunes?

I think it’s given them a great platform to actually be performed live. So many of those songs were one hit-wonders; massive tunes, don’t get me wrong, but hardly anyone got to see them played. So this set up lets that happen for a whole new generation, as well as the older lot. It means they’re kept alive this way, and celebrated by loads of people enjoying them, dancing to them. That’s why they were made, after all; it’s nice to see them all these years later.

How did the idea first come about?

Paul Fletcher. He’d seen the concept happening other places a Hacienda one, in America. I think he thought that if they could, we could; so we went for it. I think the sheer scale of it made me think twice – the technical parts of producing it too. After chatting to Graeme Park he was mad keen on the idea, really determined it could work.

Did any of you think would take off so well?

Not at all. Trying to synchronise an orchestra to records being played live! Not just that, also I wasn’t sure people would go for it, though I’m bloody glad they did, it helps keep me in work. There’s a sensitivity to this music, the history and culture created by Tony Wilson and Rob Gretton – especially in Manchester. It belongs to everyone, so you have to take that into account – well, I do, anyway. I was there at the start and in the group, but it’s bigger than any of us. That’s even more the case with the Joy Division Orchestrated project. It draws a lot of scrutiny, understandably so.

The logistics of preparing for a gig, all of those instruments, must be immense?

Yeah. To be fair the conductor of Manchester Camerata, Adi Brett, has her work cut out. She does a hard and phenomenal job; writing the score, selecting who is going to play, and arranging everything. Whoever is playing travels with their instruments, and the rest – if there’s a piano or anything big – will be handled by the road crew. A lot goes into it, like you say

With the successes of the live-shows and critical acclaim, are their plans for another album?

The problem is funding. Albums aren’t cheap to make. Paying all the musicians alone takes a huge chunk. Times that by 35 or so, or whatever, and it’s just not financially viable. Sony backed us for the first one, which is great. But with music as it is today, you’d never recoup enough on Spotify or whatever. That’s just how it is. I think we just have to be grateful we got the one out we did. It’s well worth watching the videos though, you really see how much people love it – the one in Castlefield Bowl, Manchester, they’re going absolutely apeshit, it’s amazing to see!

Are you a fan of classical music yourself, Hooky, or have your eyes and ears been opened?

Yeah. More so now – I think it’s always been there, though, the influence. As a producer, bringing in strings or a big brass section is sort of always a trump card. You can hear that in Blue Monday, and other records. I think people respond to things that make them feel, fundamentally. Classical music definitely has that power. It’s very beautiful music, really emotive. I actually play it most nights, to calm my dogs down. It works really well.

Was the Manchester Camerata Orchestra the obvious choice? With such a people-focused ethos and attitude, did they buy in to the idea straight away?

Yes. I knew about them and their reputation for innovation and being forward-thinking. I loved that idea and thought if it’s going to work (which I still wasn’t convinced at the time, like I said earlier) then surely they can play a big part in trying to make sure it does. Musically, they’re a very disciplined bunch and again, to repeat myself, don’t entertain improvisation. As people though they’re like most of us; have a drink and (some of the older bunch) memories of being off their heads back in the day at the Hacienda. They do great charity work, and them being a Manchester organisation was a big deal too. Tony Wilson and Rob Gretton created social history and world-renowned culture with Factory and the Hacienda. I like to think that Hacienda Classical carries that on, and the spirit of it all. As long as the crowds keep coming (Manchester loves a good party, right) we’ll keep doing it. Long may it continue.

All words by Benjamin Francis Cassidy. For more of his work please visit his author profile

Please note: Use of these images in any form without permission is not permitted.