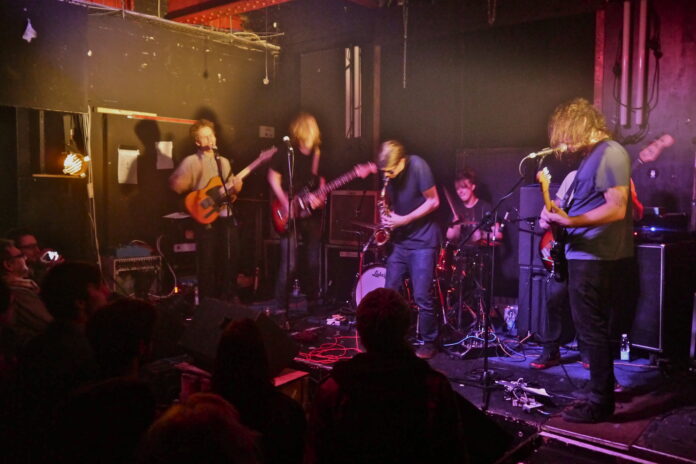 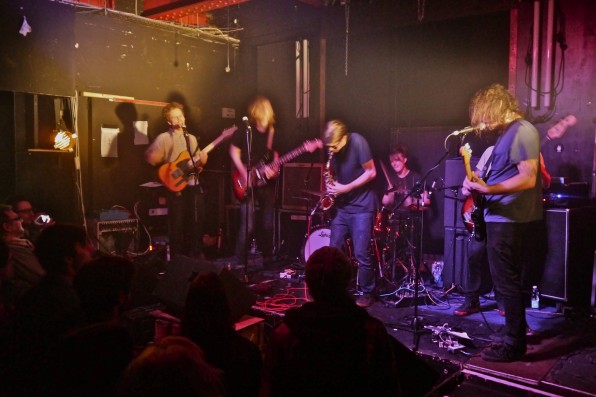 Members of Parquet Courts and PC Worship exhibit their jazz-infused drone rock at first London show in the form of PCPC. Louder Than War’s Will Dix was there.

It’s not every gig that the saxophone player jumps into the crowd, still competently riffing over a cacophonous trio of fuzzed-out, buzzsaw-paced guitarists, but then few gigs are those of PCPC, the still quasi-foetal collaboration of Parquet Courts and PC Worship.

Both are averse to social media and fully explaining themselves in interviews, so it seems fair to say the couple-hundred people crammed into Electrowerkz’s gig room are not here on the basis of any ‘hype ting’, as Lethal Bizzle would say. More likely, they’re here (as I am) out of pure curiosity as to what obtuse stunt Parquet Courts, having released a cassette-only debut album and about to change their name to Parkay Quarts once again, will pull next.

This time, what we get is something comparatively less contrived. What little material PCPC have come up with since forming a few months back is jammed out over a modest thirty-five minutes, a marked change in pace since when I last saw Andrew Savage and Austin Brown (guitarists of Parquet Courts). On that occasion, the need to stay their welcome and no longer was unashamedly lacking, whereas tonight they’re maybe a little too eager to leave us.

The overall sound is something impossible to wholly categorise; elements of alt. rock, free jazz and the American avant-garde blend together to create something often baffling, at times painful, but never boring. One track, on which Savage seemingly improvises lyrics paraphrased from a gossip mag in his hand, recalls Lee Ronaldo’s cathartic spoken-word rant heard on The Cribs’ Be Safe, and perhaps more tenuously John Cage’s Indeterminacy. Ultimately it doesn’t have the bite or inventiveness of either, but it’s still an admirably ballsy shift away from the humdrum garage-rock Savage and Brown are known for.

Distorted, guitar-led drones make up a large part of the soundscape in a not too dissimilar fashion to Sonic Youth’s Murray Street LP, though, again, PCPC don’t manage to walk the line between innovation and indulgence quite as well their heroes. But just when the racket starts to all get a bit samey, out pops an unexpected cover of Steppenwolf’s Born To Be Wild, tying the show together by maintaining the edge of unpredictability they so clearly enjoy wielding.

Looking around the room at paying punters unsure of whether or not an encore is on the cards (it isn’t), it’s evident that PCPC will need more recognisable songs to their name if they hope to sell tickets under it again. Annoyingly, it’ll be the very thing that compromises their ability to screw with our expectations, but then what else did you expect from Parké Cawts? (Feel free to use that one, fellas).