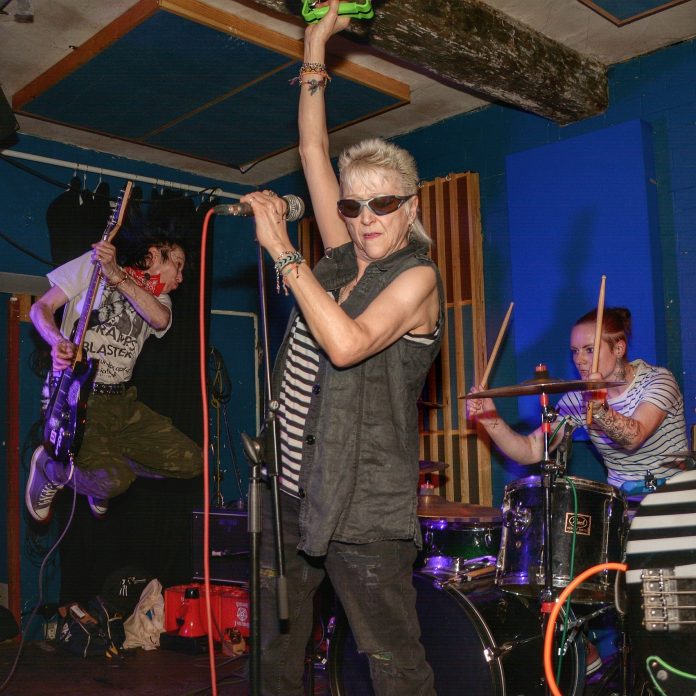 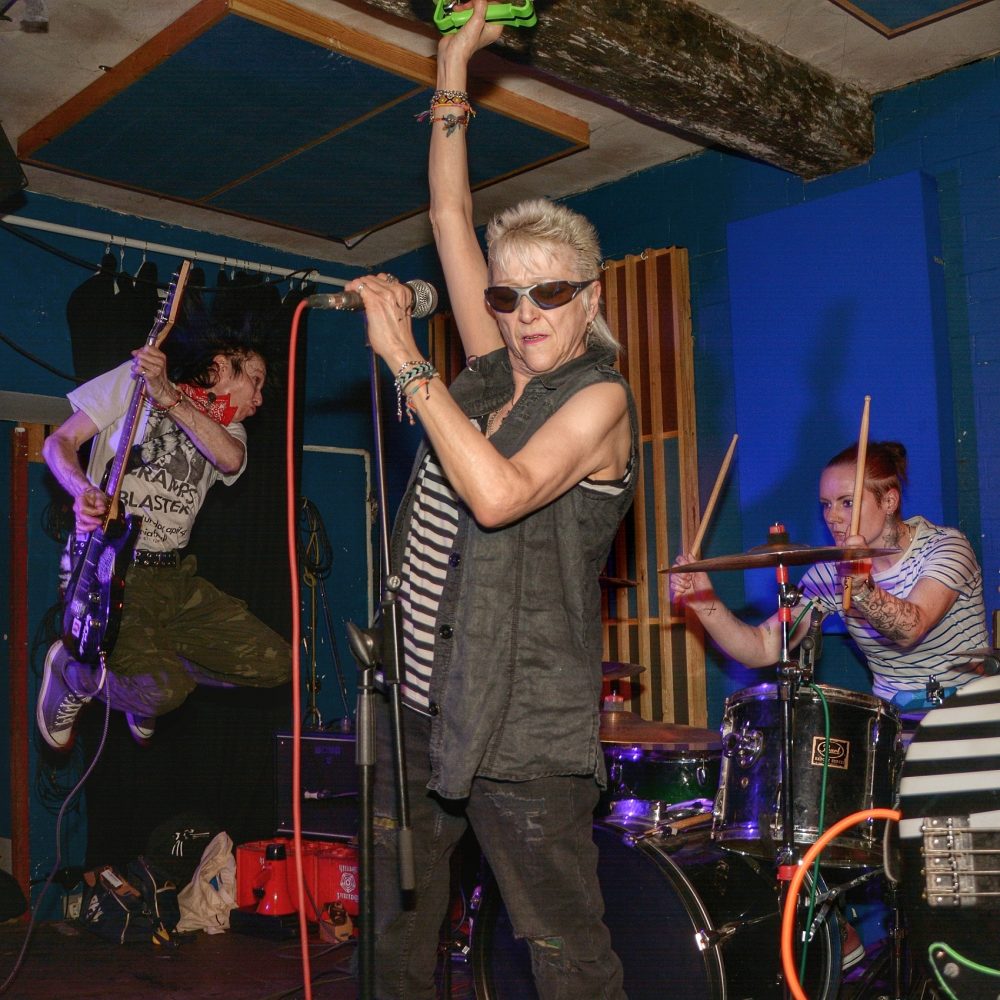 The Bank Holiday weekend offered an adventure for our fiercely Mancunian writer Iain Key, as he ventured over to the other side of the Pennines to attend Part Time Punks, an 8 band, all-day extravaganza organised, curated and hosted by Jay and Erin of the band Nervous Twitch.

Today’s setting is Wharf Chambers, a bar and multi-use venue in the centre of Leeds run by a workers’ co-op. It’s got a Youth Club vibe which is quite fitting, given that as the day goes on it feels more like your cool mate’s party rather than a gig. From the off there is a warm and friendly atmosphere with several bands and artists already milling around, many sitting outside and making the most of the sun. Jay and Erin have a fantastic job pulling this together, the thinking being that they would get together a few bands they have enjoyed seeing or playing with, some of whom are already mates and also invite a couple of bands they want to see live. Pretty smart move when you think about it. What’s even smarter is that they put themselves on first so they can get their set out of the way and enjoy the day, it’s also a measure of their humility as well as they’re genuinely lovely people.

There’s a definite buzz as Nervous Twitch take the stage at 4.30 pm. Alex Greenwood, the sound man, who does a fantastic job throughout the event makes final checks and the band open with Count Your Blessings and Tongue Tied, the first couple of tracks from their most recent album. Just under half of the set is from their eponymous 2021 release with favourites from earlier albums, I Won’t Hide and Get Back In Line also included. Nervous Twitch is the sound of The Ramones doing surf; this is best highlighted on Tarrantino Hangover, an instrumental that sounds like it’s fallen directly from the silver screen. We’re also treated to Twitch’s version of I Could Be In Heaven. The Flatmates original is essential to any C86 mixtape but I must admit the more I hear this version the more I prefer it. The band close with two tracks from their next album; due out later in the year; Social Chameleon and Forgive Myself, both of which fit perfectly into the set.

Next, we have Sheffield’s All Ashore! As with many of the bands on the bill, I’d heard them but not seen them previously. Their 2020 album Staying Afloat is one that I’ve played often over the last 18 months or so however and I was looking forward to seeing them. They don’t disappoint. I like to think that the word shambolic is a positive one when it comes to those clearly influenced by DIY labels of Sarah Records and the Subway Organisation so I’m hoping they won’t mind me describing them as such. Performing as a four-piece, they play several tracks from the album, with Elodie, Tonieee and Chris taking turns on lead vocals. They’re a friendly, quirky bunch who enjoy their time on stage as much as the audience do watching. As well as the day’s first ‘false start’ (there will be a lot more to come, all received with laughter and applause) they are the only band to pay tribute to the band whose Part Time Punks ‘named’ the event with their version of Geoffrey Ingram.

The experimental futuristic post-punk of Louder Than War favourites follow with The Dirt taking the stage shortly after 6 pm. They are one of the acts I’ve been looking forward to seeing. The amalgamation of Sachiko’s Japanese guitar-led psych topped by Leon The Pig Farmer’s abrasive spoken word is a stark contrast to the first couple of bands but completely fits into the bill. The sound that comes from the guitar and effect pedals is incredible and hypnotic as you focus in on the delivery of the lyrics. Looking around the audience I wasn’t the only one mesmerised into a trance like a state by the performance as the duo worked through several tracks from the Psycher-Billy release including The Bully, Astral Elevator and Dream State. It’s not always a comfortable listen but it’s completely gripping.

I’ve been wanting to see The Red Stains again after recently catching them at Manchester’s Retro Bar. They don’t disappoint. The 3 pieces of Natalie Emslie, Sterling Kelly and Ben Dutton certainly grab your attention. Ben is possibly the best dressed on show today in his rockabilly splendour, enhanced by a Steve Jones ‘tits’ t-shirt. With him, on drums and Sterling on bass, they make for a fucking tight rhythm section, with the groove of the recent single Smile being one of the most addictive I’ve heard since The Jam’s Precious. It’s the first time the band have played in Leeds and they’re clearly enjoying it with Natalie having plenty of banter with the crowd, engaging in discussion on subjects such as the positives and negatives of shopping at Farm Foods and Poundland. I may be stereotyping, but hopefully not offending, when I say she owns the stage and performs like the hyperactive, mid-tantrum, offspring of Claire Grogan and Shirley Manson. Amongst the set made up of recent releases there are a couple of new tracks, TV Static and Fluid, the latter a powerful and positive song advocating more understanding and acceptance of those who are non-binary, transgender etc and their rights.

Local heroes Crumbs made up of Ruth, Gem, Jamie and Stuart are next to take the stage performing songs mainly from their 2017 album Mind Yr Manners. They’re one of the bands on the bill I’m least familiar with, but I intend to make up for that. Their set highlighted the feeling that you were at someone’s party rather than a gig, with casual banter and humour between the band and interaction with the audience. I hope to catch them again soon to write more about them!

A band I’d been looking forward to seeing were Nervous Twitch’s Reckless Yes label mates Duck. Unfortunately, I missed the start of their set as I needed to get out for some fresh air and stretch my legs. Upon returning from a trip to the Co-op for a meal deal (other convenience stores and meal deals are available) I found that the band were already on stage. The thing I love about the band and their album There Are No Normal Conversations Any More is the ability they have to switch from sounding like their playing an improvised experimental b-side by The Fall to a slightly ragged indie stomper within seconds of one another. Alongside favourite C/Rage the band reach back into their catalogue to Stereo, the opening track from their 2017 album Faceache; before a fantastic cover of Bikini Kill’s Feels Blind. They finish on Rabbit Hole, a highlight from the last album.

I will be honest, after almost 5 hours I was starting to flag a little but I was looking forward to the last couple of acts, one whom I was familiar with, the other, whilst highly recommended I’d not heard before. As the penultimate group The Anderson Tapes, Olga, Martin and Chris, take to the stage my daughter (sorry, forgot to mention I had a 15-year-old in tow) remarked, ‘they look like my teachers’. I’m not sure I would have disagreed even if I’d had the energy to do so. (I may have made the case for them being Social Workers possibly). They are a sophisticated indie band, with, a cult following. From what I can tell, little known about them, something they attest to, “We are a band and we play music. That’s all you need to know.” What I do know they currently consist of members from Poland, London and Middlesbrough. This evening they play 7 tracks from their 4 releases to date, EP’s Slaughterhouse 8, Out There and Everyday Again as well as standalone single Sirens. If this was a party, and the other bands were your peers, the trio playing music influenced by the likes of Wire, Pixies, Sonic Youth and The Stooges are definitely your older sibling’s cool college band. Hopefully, it won’t be long before they play up North again.

If The Anderson Tapes are the older siblings then the final band, Diablofurs are the rowdy cousins who have come to show you how it’s done. While many of the crowd’s energy levels are almost depleted this 5 piece are a shot in the arm. It’s a full-on, out and out mix of indie rock with a bit of glam rock and punk thrown in for good measure. Jay and Erin had both bigged up the band when I spoke to them ahead of the all-dryer and I can see why. Despite the stage being pretty packed, they make the most of it. Vocalists Suze and Rob have limitless energy, constantly moving throughout their hour-long set. It’s not just the front persons though, there is constant movement on stage demanding your attention. Danii pouts and poses whilst performing bass duties and contributing backing vocals, Kay dances at her keyboards and somehow Becks manages to hold the beat to underpin it all. Every song sounds like an anthemic ear-worm; with a singalong chorus and numerous opportunities to punch the air in celebration.

I’m surprised to find out that the first half of the set, Blue Thing; Submarine Spies; Crocodile; City Of Fun; Our Guide To Stars And Planets and Swim Alone are yet to be committed to vinyl although known to many of the crowd. Clearly, I’ve not been paying attention! As a neutral I wouldn’t have been able to tell some of those previously released, Pressure Don’t Stop; Obsession; Meteors from the new material. Sadly, all too soon, the day comes to the end with Erin leading the shout of ‘one more song’ before the encores Everybody’s Dreaming and World In 260.

Without doubt, I’d say Diablofurs are now at the top of my ‘must-see again’ list, but in all honestly all of the bands on the Part Time Punks bill are more than deserving to be there and I would recommend people check out. Hopefully, the organisers view it as much as a success as those attending did.

To quote the song which named the event, ‘they come from many places, they come down for the day’…

All photos thanks to Paul Samuel. You can find him on Instagram