Home Music Reviews Album Reviews Felt: Poem Of The River, Train Above The City And Me And... 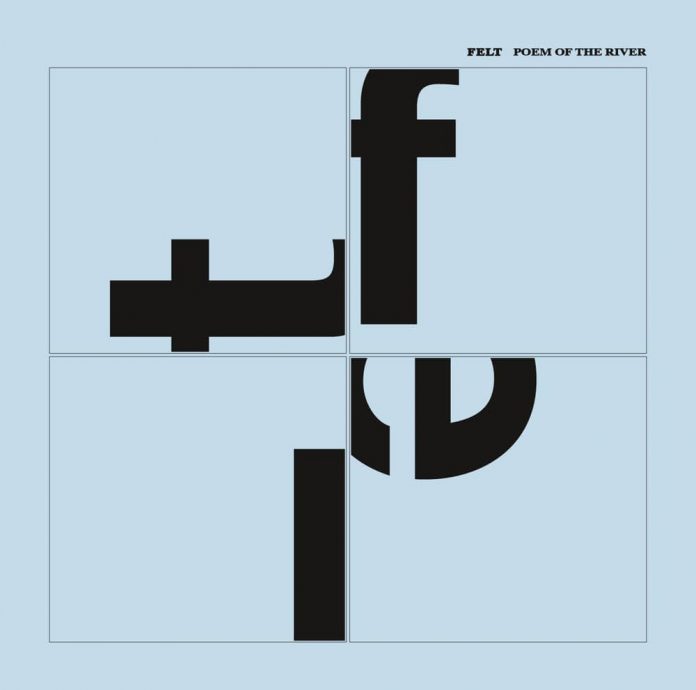 Felt – Poem Of The River, Train Above The City, Me And A Monkey On The Moon 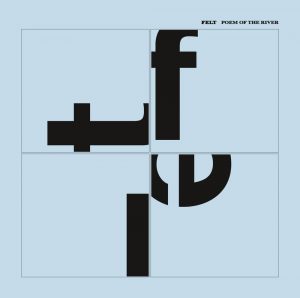 Reissues of the seventh, ninth and tenth Felt albums, remastered and with new artwork. The other seven Felt LPs are also being made available as part of this new run of releases. Ian Canty asks for a platform ticket…

Felt’s “10 albums in 10 years” back catalogue was reissued a few years back in sumptuous boxed sets as part of the A Decade In Music series (I reviewed the first five of them here, The Pictorial Jackson Review here and Forever Breathes The Lonely Word here). But now we have these “vanilla” editions, with new individually coloured but pretty generic looking covers. People will have their own opinions on whether you should tamper with either a record’s sound or design, but the rationale from the PR appears to be to tie the updated sleeve art to Penguin’s method of altering their book’s look each time it reprints a paperback classic. That’s as maybe, but I have to say though I do tend to think that there wasn’t that much wrong with the original sleeve illustrations.

Moving away from the sleeves, the bottom line of what we get here is reasonably priced versions of each album with no extras. They have been newly remastered and in Poem Of The River’s case, restored. That record was originally produced by Mayo Thompson of The Red Crayola. When his takes were not deemed good enough, Robbie Guthrie was called into remix the tracks. This new version seeks re-instates some of Thompson’s productions. Coming in at just over 26 minutes, Poem Of The River was really more of a mini-album than anything else, but as it is a delightful listen I’m not about to split hairs.

The short and sweet Declaration welcomes us to Poem Of The River with just a scratchy guitar and vocal, with bass and percussion appearing and gradually building to a crescendo that is headed up by some lovely organ swirls. Then Silver Plane drifts into view elegantly – if Lawrence sounds very like a Midlands Lou Reed here, the Velvets seldom had such warmth. Mayo’s production of the gentle, country rock-flecked She Lives By The Castle is put back in it rightful place and is heart-breakingly tender. Next Stained Glass Windows In The Sky playfully picks out a thoroughly endearing path.

Riding On the Equator, Poem Of The River’s longest offering at nearly nine minutes, is simple in structure but a completely enchanting piece of songwriting and also a masterclass in poise and restraint. The album finishes with Dark Red Birds, which is endowed with such a golden feeling that sent me away from the record with a spring in my step and feeling much the better for having heard it. That’s the positive power of music in a nutshell. In short, Poem Of The River is a beautiful dream, a work of vision, imagination, love and craft.

Ninth LP Train Above The City was an anomaly in the Felt canon and the one album that Lawrence wasn’t on, or so the famous story goes. This was a big departure from their trademark sound certainly, with the record being made up of eight jazzy instrumentals which featured only Martin Duffy on piano and keyboard vibes, plus Gary Ainge handling the percussion and also chipping in with some vibe work too. It now appears that Lawrence was on hand though throughout the recording process, directing proceedings from a distance. I recall the UK music press hating Train Above The City on its original release, but I suppose now is as good a time as any for a reappraisal.

The jolly vibes of the title track greet the listener initially on Train Above The City and set the tone for the LP. It is then followed by the more reflective piano blues of On Weegee’s Sidewalk. A couple of relatively brief numbers in an upbeat Run Chico Run, which could be my favourite of the whole album and the standard r&b/jazz runs of Press Softly On The Brakes Holly follow. After that, the stately pace and elegance of Spectral Morning oozes pure class.

Teargardens, a slow and moving lyrical piano and vibes meditation, is great music for a grey Spring morning and very enjoyable. The shortest track on the LP Book Of Swords, which is much like a sequel to Teargardens with the vibes up front, is followed by the longest in Seahorses on Broadway. This finale to Train Above The City follows the trend of the last few efforts with an emotional, beautifully arranged élan. Train Above The City isn’t the first album anyone would reach for when someone asks “What did Felt sound like?, but it comes with a charm all of its own.

Finally Me And A Monkey On The Moon was one hell of a parting shot for Felt. It embarks with the slide guitar of B.J. Cole enhancing I Can’t Make Love To You Anymore, a gorgeous pop tune that makes the most of Rose McDowall’s perfectly judged backing vocals and follows it up with the busy beat bounce of Mobile Shack, where Lawrence revealed his exact place of birth. The piano plays a leading role in the musical drive to the graceful and attractive Free and Budgie Jacket’s title was a perhaps a hint towards the early 1970s obsession that would inform Lawrence’s future adventures with Denim and Go-Kart Mozart. The song itself has an agreeably jangly guitar which is kept on track by some assertive rhythm playing.

Cartoon Sky shuffles amiably in a folk rock/VU fashion with clavinet playing a brief but key part and then comes the almost funky, moody and epic New Day Dawning, where the pedal steel is again neatly utilised. The Hammond work and edgy bass build a suitable backdrop for a great example of Lawrence’s unique standpoint and talent for convincing storytelling. Along with the wistful beauty of Down An August Path, it forms the beating heart of Me And A Monkey On The Moon.

I felt like I had a direct line to Lawrence’s heart on listening to the alternately glistening and then powerful Never Let You Go and a more jagged She Deals in Crosses reflects the knotty subject matter and even features some rock & roll guitar soloing towards its conclusion. It is left to the clicking rhythm of Get Out Of My Mirror to put a full stop on the LP and also Felt’s ten year career – a hugely loveable and very musically accomplished way to sign off.

Whether or not Felt fans wish to invest in these new reissues will hinge on whether the remastering makes it worth your while. They sound good to my ears anyway for what it is worth. If you are brand new to Felt, it might sound daft but final LP Me And A Monkey On The Moon isn’t a bad starting point and Poem Of The River is simply glorious, you can’t really go wrong with either. Train Above The City is something else entirely to try a bit later on I feel. What is certain is that all of these three and indeed the other seven offer the listener something you just don’t get anywhere apart from Felt, something to really treasure.