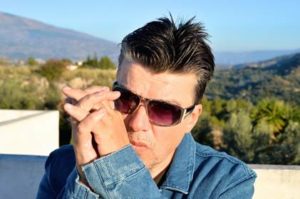 Dr. Robert, iconic singer, songwriter and multi-instrumentalist with The Blow Monkeys, releases his tenth solo album ‘Out There’, out now via Fencat Records.

Recorded at home on his ancient 8 track Tascam tape machine, the album is a home-cooked, heartfelt affair. “Home”, by the way, is the house Robert and his wife Michele built a few years ago in the foothills of the Sierra Nevada in deepest Andalucia, Southern Spain.

With ‘Out There’, Robert explores the deep seam of acoustic songwriting that has characterized much of his previous solo work, from the acoustic stylings of early Marc Bolan to the jazzy diversions of Tim Buckley. “I used a lot of open tunings which is all new to me so I couldn’t fall into well-worn paths. It’s about the drone in those tunings. No middle eights or key changes or bridges. Just groove.”

Robert enlisted help from some fellow travelers along the way. Richard “Snakehips” Dudanski, one-time drummer in Joe Strummers pre-Clash combo the 101’ers as well as Metal Box era PIL, lends his drumming skills to the hypnotic ‘Lost in Rasa’, one of the albums standout tracks.

The album also features the exquisite piano and accordion playing of young Jos Hawken, a native Shetland Islander who now resides up in the mountains near Robert. Local busking “Professor” of saxophone, Joe Degado, also joins the party on the Brel-like, ‘A Bottomless Pit’ along with ‘Lost in Rasa’.

“I wanted to make music for its own sake. Just for the sheer joy of it. The best moments come when you’re just sitting around in the kitchen or whatever, strumming and singing and laughing. That’s the approach I took in my little studio. First takes, mistakes and all – before self-consciousness sets in. I played most of the instruments myself out of necessity and even made my drumming debut!”, says Robert.

First coming to prominence in the mid 1980’s as the frontman of pop-soul group, The Blow Monkeys, the band had a golden period of hit albums and singles, sprouting opinions and striking poses in equal measure, before disbanding in 1990.

His first solo album, ‘Realms of Gold’, released in 1994, was hailed as a classic of its kind, imbued with the spirit of his Greenwich village heroes Fred Neil and Tim Hardin and featured good friend Paul Weller. A series of eclectic and singular solo albums followed including writing and producing an album of duets with 60’s soul legend PP Arnold along with collaborations with Beth Orton and Terry Callier.

Reforming The Blow Monkeys in 2008, the band have since released four brand new albums, a box set and live album and now, more than thirty years in the business, Robert shows no sign of slowing down. In fact, he’s speeding up. “I had a health scare a few years back. I gave up drinking and took up dreaming again. Stopped feeling sorry for myself and started “feeling” again. I’ve never stopped but I’ve never felt this excited about making music.” Twenty albums and counting, Robert is making the freshest music of his life. Long may it continue.

‘Out There’ is available to buy here