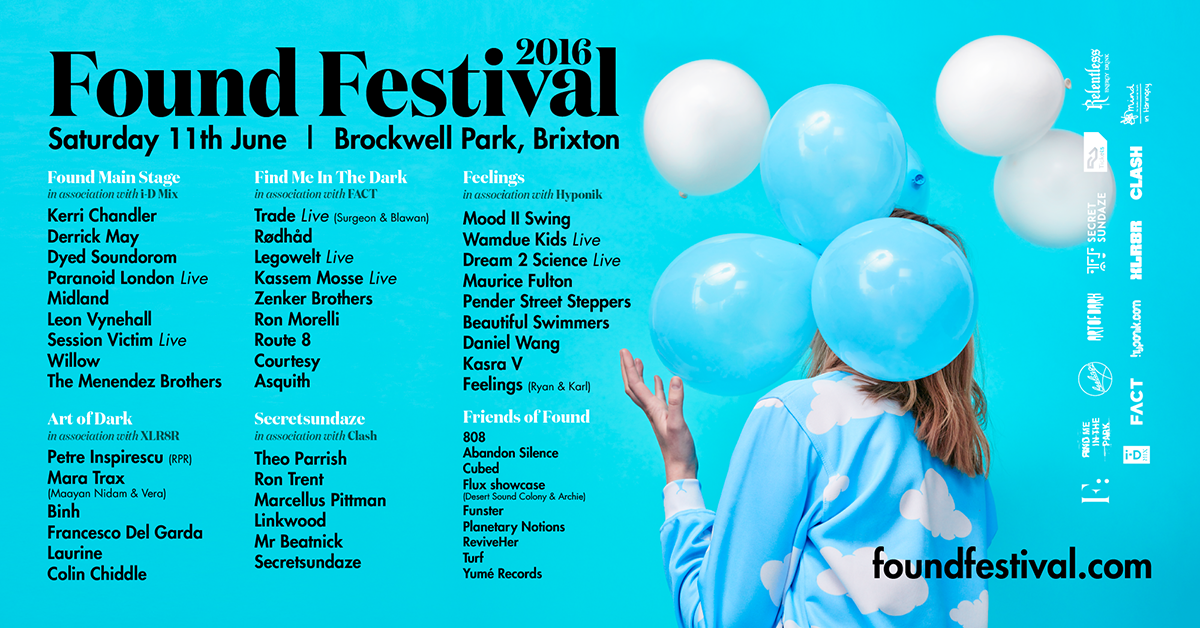 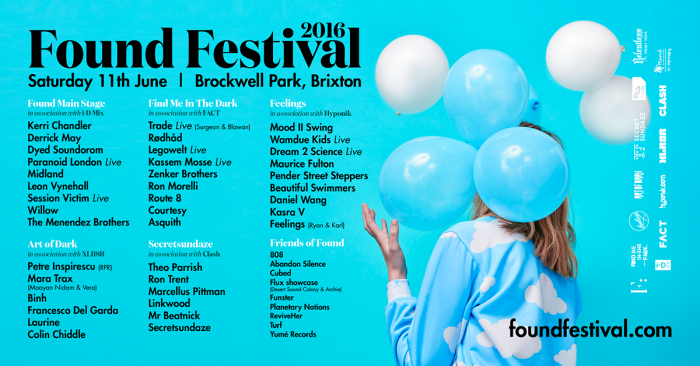 Delving deeper than ever into club culture’s grass-roots for the fourth edition of Found Festival, the 2016 lineup will unite leading figures of dance music from across the globe for the all-day festival at Brockwell Park, Brixton on Saturday 11th June.

Seminal figures of dance music join cutting-edge talents across six stages of music, as Found welcome music luminaries Derrick May and Kerri Chandler for the first time, to headline their Main Stage, alongside some of the hottest names in underground sounds as Dyed Soundorom, Midland and Leon Vynehall each take control of the open-air arena. Live music sets will come from Sessions Victim and Paranoid London, with Willow and Found Series’ much-admired residents The Menendez Brothers will welcome the early-risers to Brockwell Park.

Find Me In The Dark will offer an unrivalled programme of techno with Blawan and Surgeon headlining with their Trade moniker. Trade are joined by the tough and uncompromising sound of Rødhåd, Legowelt‘s distinctive acid-tinged productions, and blistering force from The Zenker Brothers, the bosses of the esteemed Ilian Tapes. The hefty deep layers of Kassem Mosse playing live will compliment the sharpness of Ron Morelli and Lobster Theremin stalwart Route 8 will spin a set of his trade-mark, melodic tracks. Copenhagen scenester Courtesy and Find Me In The Dark founder Asquith will be playing opening sets.

Having stolen the show at last year’s Found Festival, Chicago house originator Ron Trent will return for 2016 to play secretsundaze’s arena alongside Theo Parrish and Detroit house royalty and 3 Chairs member Marcellus Pittman. Jazzy house maestro Linkwood will join the ranks alongside Mr Beatnick, plus secretsundaze’s residents. Art Of Dark bring a truly international lineup of forward-thinking sounds to the Brockwell Park all-dayer with a headline set from one-third of the RPR Soundsystem, Petre Inspirescu. Maayan Nidam and Vera Heindel will perform as Mara Tax and Binh will give the crowd a taste of Berlin’s underground scene, with supporting sets from Art of Dark favourite Francesco Del Garda and residents Colin Chiddle and Laurine.

Providing soulful sounds and rare grooves to Found Festival’s lineup, Feelings have recruited house music icons Mood II Swing for one of their first UK shows in more than decade. Also making a rare UK appearance Wamdue Kids and Dream 2 Science join the bill alongside Maurice Fulton, representing an unmissable opportunity to see these 90s legends playing under one canvas.

Representing the next wave of producers and bringing fresh sounds to Feelings’ arena, Pender Street Steppers, Beautiful Swimmers, Daniel Wang and Kasra V will each take their turn behind the decks, with respected Feelings’ residents Ryan, Gustave and Karl getting things warmed up.

In a move back to the egalitarian roots of dance music culture, there will be no VIP area at Found Festival 2016, with festival-goers able to enjoy all six stages of music throughout the day.

Showcasing some of the most exciting fresh sounds, Room 2 will be headlined by one of 2016’s most hotly tipped acts, Willow, as well as Apeiron Crew’s Courtesy and Lobster Theremin head-honcho Asquith.

Found Series are proud to partner with mental health charity Mind for their 2016 festival series.