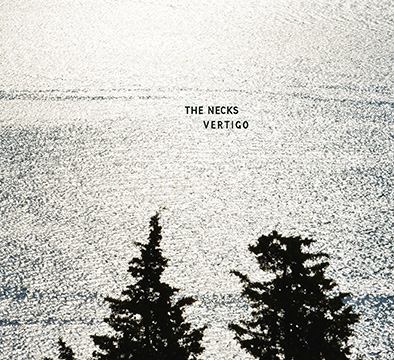 Are there two bands called The Necks? Not so much in a physical sense – I can’t quite imagine Lloyd Swanton, Chris Abrahams and Tony Buck ever taking competing versions of their experimental ambient jazz outfit on the road in the time honoured tradition of The Drifters, Yes or Hawkwind (‘Tonight! Tony Buck’s Real Necks!’ etc). They seem far too well adjusted for that type of dysfunction, for one thing.

Rather, the difference is between the live and recorded incarnations of the group. The Necks’ shows are dense, often quite turbulent affairs. The last couple of times I’ve seen them play in London, the trio locked together to produce thick waves of sound that were not only immersive, but almost overwhelming. Chris Abrahams, impassive behind his piano, letting fly with frenetic clusters of notes, his  foot firmly placed on the sustain pedal, as bassist Lloyd Swanton conjured deep bass swells that seemed almost tidal and Tony Buck – looking as rock’n’roll as ever – battered out voodoo rhythms that drove everything forward despite avoiding any kind of conventional rock tempos.

Yet the record they were ostensibly promoting, 2013’s superb Open, was so unlike these performances that a casual listener might assume they had been created by a different cast of players entirely. Where the shows were sonically dense and full of bold gestures, Open was, as the name suggests, full of airy spaces, its movement minimal and pared down.

Of course, the band has always been clear about the difference between the two environments. Live shows are exercises in group improvisation, the intensely focused playing owing as much to the group’s commitment to listening and their extensive history together as it does to individual technique (enviable though that may be).

The records, though, are different. Here composition, rather than improvisation, is the watchword. Pieces are long form, generally lasting an hour, built up painstakingly in the studio from a patchwork of recorded improvisations, specially recorded stuff and bits and bobs of found sound. It’s a meticulous process, often taking place over long periods with sound files shared electronically (the three currently reside on different continents).

The care the trio take in composition is mirrored by their concern in making each Necks release sound completely different from its predecessor. There are general trends that can be discerned (currents might be a better word) – the dense, bustling canvases of 1996’s Drive By and 2008’s Townsville, seemingly indebted to the fusion sorcery of Bitches Brew or In A Silent Way, as compared with the delicate elemental structures of Aether and Open, seemingly fashioned almost magically from air and light. But each one is still utterly individual.

Vertigo, The Necks’ eighteenth album, falls into neither of those two groups. Or rather, while containing elements of both – the busy and  the airy – it sounds, again, totally distinctive. At first, the clamouring piano chords and deep bass drone call back both to the tumult of Drive By and urgency of those live shows. But things soon get strange, more awkward and abrasive, shifting things away from the integrated, organic feel and towards something angular and dissonant. After about five minutes, the piano fades out. There are abrupt percussion bursts, occurring seemingly at random, as well as sudden clangs of what could be prepared piano. An incessant rain of silvery chime tones becomes as tense and oppressive as the soundtrack to a horror film.

What’s interesting about Vertigo is how, as it progresses, the trio messes with its flow. It’s as if they’re acknowledging that the precision of Open resulted in something almost too perfect, like a beautiful artefact in an empty white room, something so carefully constructed that any humanity somehow slipped away. In Vertigo, The Necks are happy for people to see (or hear) the joins. That’s not to say these transitions aren’t frequently astonishing, even if they aren’t quite as polished as before. Check out the three-minute sequence from about 10:00, which sees an insistent, high-register piano chatter slowly overlaid by a second, lower piano track while a strange, hissing oscillation drifts in, part-cymbal, part car alarm, almost swamping everything else. It’s a thrilling, feverish ride.

The album is due to be released on vinyl as well as CD and download, which perhaps explains why there’s another dramatic shift at around the half way mark. There’s a barer, more metallic sound, the warmth of the piano and bass replaced by spooky percussion, warbly chorus-pedal guitar and alien-sounding organ (or perhaps processed piano). It’s a cold, attenuated vibe, with Abrahams’ playing orbiting around repeated motifs and Buck sounding more like a gravedigger than a drummer. Even Swanton’s bowed bass interventions sound chilly , almost funereal.

Things come to a peak at about 33 minutes, with a wall of fuzz and feedback appearing without warning and building to an ecstatic crescendo that’s more like a slo-mo My Bloody Valentine than anything else. It’s a pretty neat trick to have in your back pocket this late in the day, giving Vertigo a sudden injection of rock energy just when you’d be expecting it to fade slowly into the gloaming.

The album is full of unexpected twists and turns like this, things that will delight newbies and Necks freaks alike. I don’t know how they do, but with Vertigo the trio have managed to deliver another brilliant album that’s up there with all their other brilliant records. When journalists used to ask the late John Peel what his favourite record was by The Fall, he’d always say: ‘whichever one’s out now’. Well, I kind of feel the same about The Necks. What’s their best record? This one. Until the next one comes out, that is.

Pre-order Vertigo here. Keep track of what The Necks are up to on their website.