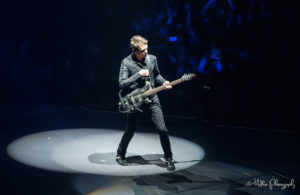 Somewhere in the distance something mighty is going on.

There it is blown up into hammer of the gods proportions on the huge screens – the tiny ants of Muse creating a celebration of bombast that is, somehow, staggeringly beautiful.

There are so many facets to the band it’s hard to know here to start. Very much a 21st century thing, Muse combine the technology of the now with a stage show gadgetry and effects that teeter the band towards high octane sci fi Armageddon. Meanwhile their high decibel music is a breathtaking exercise in musical prowess and technique that they have perfected since appearing out of Teignmouth in 1999.

On so many levels this should be so wrong and it would be easy to be hipster critical about their sheer breathtaking bombast but we are here to celebrate their daredevil brilliance and the band are so good at what they do with Matt Bellamy’s fragile and spectral falsetto so tinged with emotion that they turn this potentially glacial affair into an exercise of pure beauty.

Muse have the audacious talent and ambition to make this really work. It’s not just the breathtaking musicianship that is key to the band but also their far reaching musical ambition that sees them stretch rock into so many dynamic and thrilling shapes – it’s stadium experimental as they take their outrageous ideas and musical brilliance to number one across the world – a notoriously difficult task.

The songs float by like slices of glacial intergalactic Prog funk like on their biggest hit Supermassive Black Hole which gets the crowd dancing all the way to the muddy black hole puddles at them edge of the filthy field. They also deliver anthemic and yearning pieces of deep space skree – each one defined by that voice or pieces of breath taking guitar playing that really break the mould and with a battery of effects seek out just what can be done with the electricity. It’s like a 21st Century Hendrix remoulding the guitar into new and exotic shapes as it sprawls in and out of songs or like the kind of reinvention of the very squelch that a guitar was capable of like with Tom Merillo but all the time with Muse’s distinctive neo classical touch – that kind of swooping musical ambition of ambition of the pre rock n roll masters.

Not that is some kind of maniacal exercise in guitar playing – there are some songs were the guitar is sparse or not there at all relying on Chris Wolstenhome’s heavy fuzz bass riffs to carry the back bone with the pounding, neo gothic tribal drums that mould the rhythm section. This powerful rhythmic pounding is key and makes the band themselves sound like some kind of distant cousin of the early eighties Goth bands – that combination of Bauhaus and their deconstruction of trad rock and Daniel Ash’s stunning guitar playing and the tribal elements that were creeping in at the time.

Perhaps this kind of glam goth was part of their initial DNA but the band have very much created their own, ahem, muse. A dark and foreboding beauty, a creative no holds barred madness that is outrageous in its scope.

The fact that they can be so inventive and original and headline stadiums worldwide is further proof that music is still a powerful perfume and creative force in these times.