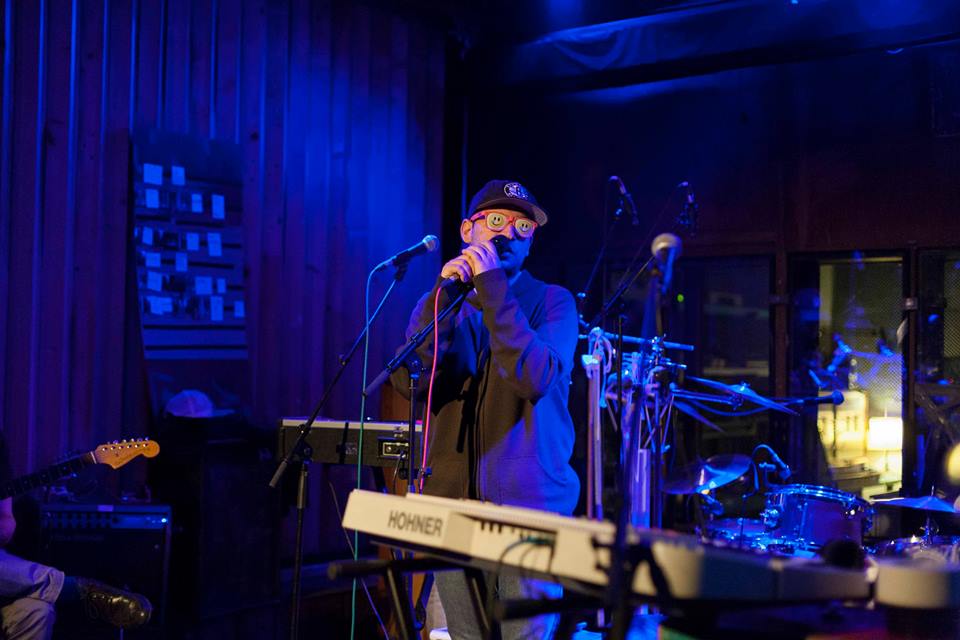 Sometimes you see a gig that is key; a game changer. Key in reminding you of music’s potential to open portals to spaces you never thought you’d explore, spaces that you’d assumed would be closed to you, or ones that you thought wouldn’t be that gratifying or revelatory. 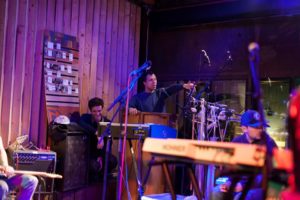 This gig by Les Harry’s and Friends at WORM in Rotterdam was a key one in shattering some assumptions, and dispelling a certain weariness I’ve had round reporting music recently. I know I may sound like the worst sort of New Age lifestyle expert, but it really is refreshing to be confronted with a night that makes you ask questions of yourself, and your listening or gig-going habits

Why would this be? Well, for one, Les Harry’s are a remarkable band of people. A group of autistic musicians from the St. Antony daycare centre in a suburb of Paris, they make the most extraordinary free form music. The LP they made in 2015, GGOTS, is a killer record; a rumbling, rolling beast full of drawn-out jams, hilarious rants, and explosive stabs of noise. Imagine ‘Peking O’ or ‘Soup’ from Tago Mago-era Can, or really early Sonic Youth; but looser, more mercurial. It’s a classic. On this night, in WORM’s spaced-out hall, six lads and their carers and companions (including the remarkable Franq de Quengo from Sonic Protest) were joined by a group of Dutch avant-garde musicians, instrument-builders and sound artists; Lukas Simonis, Henk Bakker, Yuri Landman and Janneke van der Putten, to both play this LP and find common musical ground. In classic WORM style the night was a double header; with a film of Harry Merry (Rotterdam’s own very eccentric trash-pop hero) following the gig. The Dutch Harry was at the gig himself, quietly digging the band’s unique approach to making music. 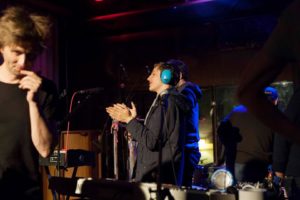 Not surprisingly, the gig, for all its potential otherworldliness, had attracted a pretty decent crowd. Were we here to gawp? Was this some terrible, patronising, 1st world exercise in showing how groovy and open-minded we were? It did cross my mind. Not that I felt anyone in the remarkably receptive and relaxed crowd was there to treat the gig as a novelty, or patronise the band as an example of ‘the other’. In any case, I would say that seeing Les Harry’s as a different or special band is a wrong move. Because regardless of these lads’ pronounced autism, music was the spaceship that we were all taking a trip in. And music surely took over the room, once again revealing its eternal power to unify and enlighten.

The gig had started slowly, a quiet hesitant beat was built up, Les Harry’s coming out individually and adding their parts incrementally. What was immediately noticeable was the complete lack of anything showbizz. In fact the idea of ‘putting on a show’ was only seen now and then. No; this night was about watching a collaboration using all that is best in music as a means of communication and self-discovery. 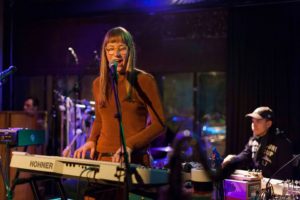 Things began to warm up, with sonic inventor Yuri Landman leading the way on one of his “Heath-Robinson-esque” instruments, making all sorts of weird and ugly-beautiful noises. Les Harry’s started to get a collective groove on, and the lads started to relax and open up. One started to do this crazy Bez-like jig, hopping on the spot and spinning round and round; a gentle, inclusive act that was charm itself. Another of the Harry’s lads timed his drumming patterns according to his breathing. When he ran out of puff he’d simply stop, get his breath back and then carry on as before. Now, you could think that having to drum like that is a debilitating thing, but as Yuri Landman pointed out later, it gave a new interpretation to keeping time that the “professional” musicians were able to feed off and explore.

Sometimes the music was a primeval stew of half notes and atonal meanderings, the Dutch band taking their feet off the pedals [sic!] to allow a unique sonic space to build up; one that was happy to work out what it wanted to do in its own time. No rush, just creating in the moment with no real need to prove anything. 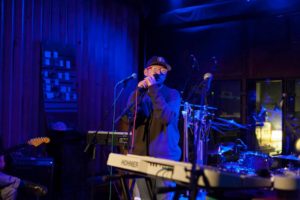 A lot of Les Harry’s music is often based on monologues with musical accompaniment, rather than songs. This meant that the sounds changed markedly, according to the personality of the singer. One Harry, a bubbly character name of Sammy, wearing some freaked out fake sunglasses that one of WORM’s staff had given him, rapped on in a highly inspiring style. He kept going, encouraged by Lukas Simonis on guitar, to make an increasingly breathless soliloquy, words tumbling over Simonis’s subtle phrases and looped sounds.

The last track was the brilliant Harry’s track, ‘C’est le Voix’ (it’s the voice) given a full, loose workout; a serpentine interpretation that grew in power as it progressed. Afterwards, visibly moved and happy from the reception they’d received, the band ran around the room, meeting everyone, and drawing pictures on the blank cover of their CD. I’ve got one myself, drawn by David, which promises me the city of Jerusalem. A beautiful, remarkable night. If you ever get the chance, go and see Les Harry’s. 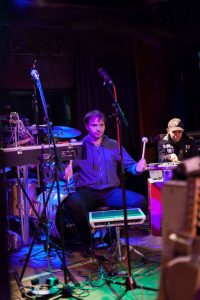