Home Music Reviews Acoustic Reviews Monica and the Explosion: The Espy and The Fox Hotel, Melbourne –... 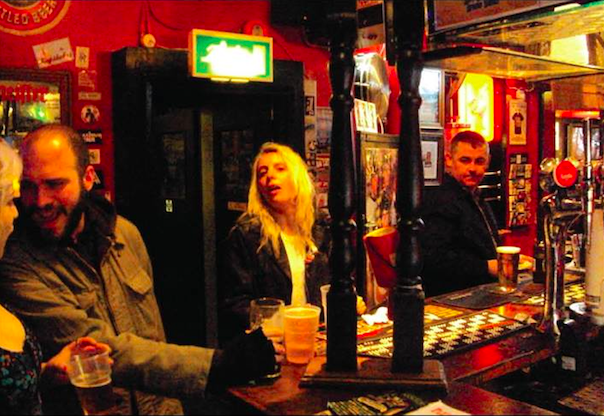 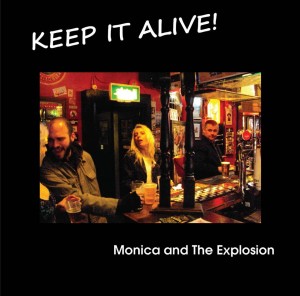 Monica and the Explosion live at

The Espy and The Fox Hotel, Melbourne

Swedish acoustic punk rock artist Monica and The Explosion went down under at the tail end of 2013 for a tour of the Antipodes. Louder Than War’s Marc Brekau caught a couple of dates on it – both in Melbourne – which he’s reviewed for us below.

Melbourne’s usually reliable summer weather must leave the visiting musician wondering what we locals rave on about when they visit our shores. They arrive expecting abundant blues skies and warm sunshine, eager to don their togs and hit the beaches, only to be confronted with grey skies, cools days and meandering ‘four seasons in one day’ stuff. Sadly, it’s this climate scene that welcomes the arrival of Monica and the Explosion as she commences the Melbourne leg of her ‘Keep It Alive’ tour down under.

But the venue and location makes up for what the weather lets down, as Sweden’s acoustic punk songstress plays the fabulous Esplanade Hotel, known locally as The Espy. Tonight’s gig will showcase material from her new album and for many punters this’ll be the first time they’ve heard it. I last saw Monica and the Explosion back in 2011 when she was promoting her then debut release ‘Shut Up’. On that tour she performed material as a duo, but for this tour she’ll be performing solo, allowing locals a chance to hear the many songs acoustically for the first time.

Being largely acoustic by design, Monica’s set and sound fit nicely alongside the local acts on offer. The exception being the oddly named ‘Legends of Gofpos’, a rocking 6 piece band under the leadership of local musician Craig Fraser, whom Monica is supporting while in town. Her set list begins with ‘Wow, What A Feeling’ followed by a ‘Rock ‘n’ Roll Song About Life’, the unusually named ‘Franglehead’ – a song she describes about getting frangled, or being fried and scrambled all at the same time – and the lyrically delightful ‘Secretly In Love’. With minimal breaks and light banter between songs, Monica’s performance is polished, well-paced and visually engaging. ‘I’m Not A Crying Hound Dog’ is followed by the popular ‘Shut Up’ before she returns to the new album with ‘My Jeans’, a personal and reflective ode about a person’s love for a well-worn pair of jeans, which haven’t accompanied Monica down under this tour (just in case you were wondering.)

From a crowd perspective, the change in line-up from duo to solo performer didn’t impact on the energy and intensity that is delivered on stage, and as a punter I find myself so engrossed in the performance that I didn’t notice the change in sound that occurs when you remove an instrument or musician from the performance. ‘I Just Wanna Dance’ and ‘Shitty In The City’ soon follow before the set concludes with ‘Five Hour Ride’, a personal story about train travel and the opening track from ‘Keep It Live’. With the set finishing just on 30 minutes, Monica stands stage side before asking the audience ‘shall I do one more?’ With the cries and claps encouraging an immediate return, Monica strums a few chords before delivering ‘Friday night’, a song she has to restart after making an uncharacteristic false start, before departing the stage to warm crowd applause for the final time.

Tonight, Monica and the Explosion have delivered another terrific acoustic punk rock set, but don’t take my word for it – you can relive the entire gig yourself, complete with soundboard quality audio and low budget lighting, in the video below.

Come Sunday and I make the 30 minute drive to witness Monica and the Explosion at The Fox Hotel, an afternoon gig that runs from 4:30 to 6:30pm. Today Monica supports ‘The Legends of Gofpos’ again, but I find myself wishing they’d do something about that bloody annoying name! The Fox Hotel is a warm, cosy pub that affords an excellent gastro pub menu and meeting place environment. Sadly, as a music venue it sucks, with a shoebox sized band room, exceptionally small stage and technically challenging PA system. Despite these challenges, Monica and the Explosion deliver a similar set to that from The Espy, with the addition of a previously unplayed track performed exclusively for this gig.

The opening track ‘Wow, What A Feeling’ suffers from PA issues when the vocals appear far too low, but once addressed Monica powers her way through ‘Rock ‘n’ Roll Song About Life’, ‘Franglehead’, ‘Secretly In Love’, ‘My Jeans’ and ‘I Just Wanna Dance.’

A brief discussion about her Melbourne visit, complete with Scandinavian observations about our missing summer sunshine and lack of suntan weather leads to ‘I Not A Crying Hound Dog’ and ‘Shitty In The City’. Thankfully the PA is delivering decent audio support for Monica now as she launches into ‘The Glow’, a truly fabulous sing-a-long song that showcases her softer and slower vocal tones.

Now Monica reveals her set list surprise called ‘Island Song’, a tribute to her favourite beach destination on the entire planet. Called Böda Beach, its located on a Swedish island called Öland, which when translated literally means ‘Island land’. So if you put the words “The Island’ before the translated name you end up with ‘The Island Island land’. Not quite New York New York, but a beach that sounds so good the locals named it not twice, but three times!

Next come’s ‘City Love’, ‘Friday Night’ and finally ‘Five Hour Ride’. Standing on stage, the enthusiastic crowd demand an encore, with one punter calling ‘hey, I need something to listen too while I finish my beer’ to provide a truly local ‘ocker’ moment. To appease the punters, Monica launches into ‘Go (I Gotta Go)’ before departing the small stage as the punters applaud. After two excellent acoustic gigs, and from a purely personal perspective, the only thing missing was ‘Avenue’, another song I’ve taken too between albums. Still, there’s plenty of time to drop Monica and the Explosion an email and request it for the next tour.

After the gig I offer Monica a lift to St Kilda, where she’s staying, but she wants to catch the tram and experience the sights and sounds of Melbourne for one last time. Early tomorrow morning she departs for Sydney and Brisbane, before leaving Australia for New Zealand shores. So I bid her farewell and as she walks away, leather jacket clad and guitar case in hand, I’m suddenly reminded of the movie ‘El Marachi’ and its acoustic guitar playing, gun slinging hero. Someone who hides his gun inside the acoustic guitar to deal with the trouble he encounters in Mexico. From a distance, Monica reminds me of this character. Even though she’s departing, I suspect it won’t be too long before she returns once again, guitar case in hand, to entertain the musical punters of Melbourne.

And if you’ve not heard the latest album, you can preview tracks from Monica and the Explosions ‘Keep It Alive’ release here.