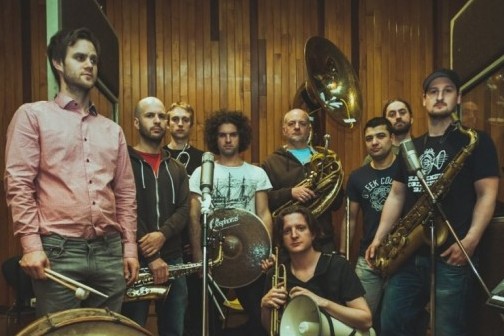 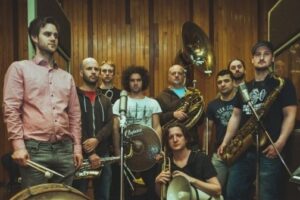 Around two months ago Louder Than War’s Dom Walsh saw Hackney Colliery Band as part of the fabulous Craig Charles Funk, Soul and Motown night at Band on the Wall. That night they were absolutely superb but could they deliver again? Read on to find out.

Around two months ago I saw Hackney Colliery Band as part of the fabulous Craig Charles Funk, Soul and Motown night at Band on the Wall. On that night they were absolutely superb so going back to see them at the same fantastic venue was a chance I didn’t want to miss. The bands ability to bring the brass band style to modern songs is truly remarkable. Over the course of the two albums that they have released they have covered tracks by artists including Blackstreet, Prodigy, Goldie, Kings of Leon, Adele, Kanye West and Toto.

What is even more remarkable about the band is the genres that they include within their unique repertoire. Jazz, ska, funk, samba, polka and dance are all prevalent. Whilst the band is adept at blistering covers, they have plenty of original compositions in their locker.

Opener, A Bit of Common Decency, is one such composition. The band took the stage through the crowd whilst playing their opening track. They followed it by playing All of the Lights and Empire State of New York – a hip hop fused double. Recent free download release Rolling In The Deep had the crowd singing along in unison as the band provided the accompaniment. Inner City Life (originally by D’n’B pioneer Goldie) was laden with tempo changes and drum solos that ensured the crowd didn’t have a moment to stand still.

As the set drew to a close the band rattled through a stonking version Superhero Disco and You Got What I Need; a ska workout that sent the already loose crowd into a further frenzy. The bands party piece; their Prodigy Medley, comprised of Jericho, Out of Space and No Good (Start The Dance) saw the crowd bellow the vocal parts of the medley back to the band with great enthusiasm. The band returned with an encore which saw them throw some polka into the mix in the form of another original composition; Hitched. Another great cover followed with Blackstreet’s No Diggity making the crowd away and groove further.

Hackney Colliery Band are a real party time band. The enthusiasm they put into their live shows ensures the crowd are going to have nothing but a good time. It’s damn near impossible to stand still watching this fantastic collection of supremely talented musicians. Each member of the band had their time to shine providing solo spots whilst all holding their parts of a fantastic musical concoction superbly.

All words by Dom Walsh. You can read more from Dom at his author’s archive here.