Home Music Bands Snuff | Off With Their Heads | Laura Palmer | Up and... 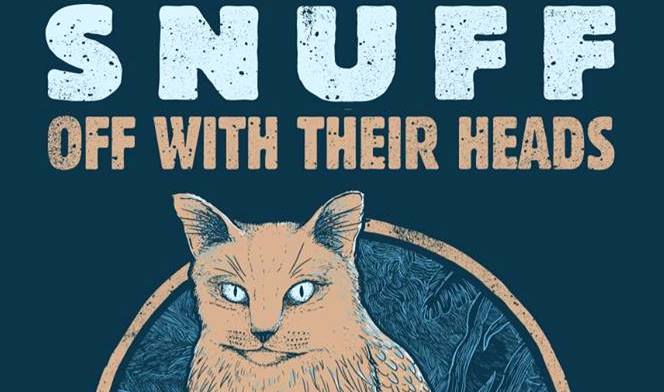 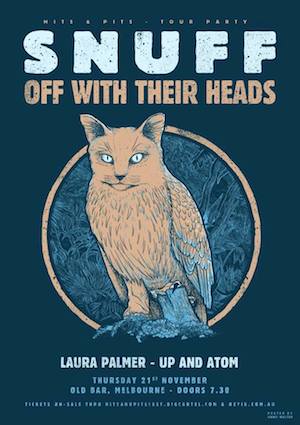 Snuff | Laura Palmer | Off With Their Heads | Up and Atom

I exit the warm, spring laden evening and enter the beer smelling, sticky carpet venue that is The Old Bar to witness a sideshow from touring punk rock package ‘Hits and Pits 2.0’. Affordably priced at £20 (AUD$36), tonight’s venue offers a homely pub atmosphere with the smallest stage I’ve encountered across 754 gigs, sitting a mere 20-30cms above an exceptionally sticky floor. Carpet aside, it’s the perfect place to get ‘up close and personal’ with tonight’s punk rock acts. Armed with a decent dark beer I catch local acts ‘Up and Atom’ – punchy pop-punk twin guitar sounds (or is that emo, I can never tell) with an energetic female singer – and Laura Palmer – more rock than punk in sound, but appreciated by the punters.

The bands share amps tonight, so changeover time was relatively short. Next up was Minneapolis four piece Off With Their Heads (OWTH), watched from my prime position just inside a doorway, located right beside the stage. Throughout their set, OWTH were expressionless, tight, fast-paced and much appreciated, with around 20 fans singing along from start to finish. The set was delivered at a blistering pace and void of band banter, personal conversations with the crowd or excessive breaks between songs. They simply banged out tune after tune, including Start walking, Theme song and The eyes of death. At one point it seemed like I was listening to a CD, but given their performance I sense OWTH will be welcomed back in future, with or without band personalities in attendance. As they leave I ask myself whether a band really needs any interaction, banter or on stage personality to pull off a good gig? Answers on a postcard please too…

It’s been ten years since I last saw Snuff down under, when they played The Tote Hotel (as headline act) and The Corner Hotel (supporting local punksters Bodyjar.) They were great then, and are great tonight. From my position I could listen to the banter between members, and hear them being amicable with their fans. It was like they were playing to familiar friends, over passing strangers.

From the outset, Duncan Redman was challenged by the heat surrounding his drum kit, and this clearly affected him as the set progressed. Half way through he began taking 2-3 minute breaks between songs, such was the heat and lack of air-con to cool him down. But in true punk rock fashion Duncan never once missed a beat, and continued to play at a blistering pace. Snuff’s five-piece line-up delivered a solid sing-a-long set, but at times it seemed a member too many to me, with the trombonist playing second fiddle support far too often.

All the usual favourites were evident as Snuff meandered between punk and ska-punk tunes. Whatever happened to the likely lads and Mumbo jumbo appeared early, while their cover of Soul Limbo was superbly timed given the First Ashes Test was under way down under. Somehow also went down well, and I was impressed by the tall and accomplished bassist Lee Batsford, whose fast playing style – effortlessly moving between running bass lines and furious bass riffs – and comical banter proved a winner with all and sundry. One punter’s exceptionally strange dance movement resulted in a broken pint glass at the feet of Lee and Loz, and Lee demands the glass be kicked under the stage by said punter before the band commence the next song. OH&S is clearly top of mind when Snuff play! Marbles gets the crowd singing, while various audience cries for Martin are only satisfied when Lee demands a member of the audience sing-the-song, but only if they know all the words. One punter responds, but has second thoughts and departs, ‘exit stage left’, but there’s ‘no worries’ as another chap soon takes stage and sings loud, proud and punk, in time and without missing a single word. Well done mate!

A quick break heralds the start of a three song encore, including Arsehole, and then the gig’s over. But hopefully not for another ten years! Hearty warm applause and cheers accompany Snuff off stage, which is actually taken on stage. Audience cries help to revive a completely knackered Duncan, who sits fatigued at the kit listening to comments like ‘call that man an ambulance’, ‘give the pommie bastard a beer’ or ‘fancy another spliff Duncan’. As the band depart I grab a set list, but it’s soaking wet and sadly falls apart in my hands. Regardless, both Snuff and OWTH have delivered excellent live sets tonight as touring bands, and subsequent social media reviews confirm they are significant crowd favourites on the ‘Hits and Pits 2.00’ tour, alongside Sweden’s fabulous No fun At All, and American crowd pleasers Boysetsfire. Alas, the latest incarnation of Black Flag fails to generate the same adulation and reception, but that’s another story altogether. Let’s hope Snuff return to our shores before I age another ten years…