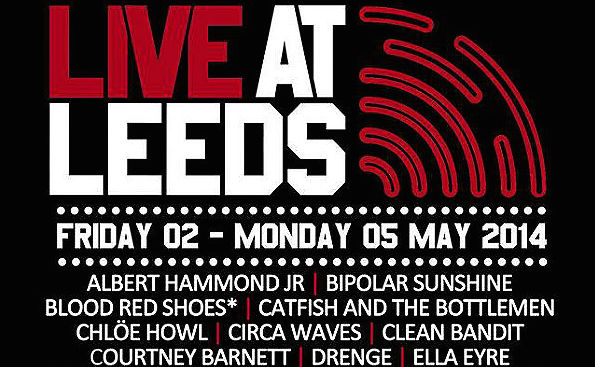 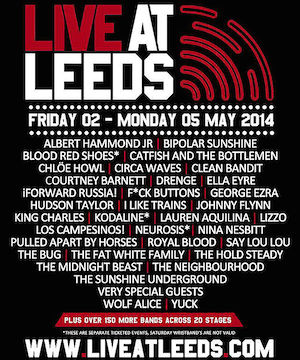 Aside from the big Town Hall gig, there was quite a lot going on in Leeds on Saturday 3rd May…

And we’re off! I don’t know how your festival season starts – maybe stuffing the car boot with camping gear and supermarket beer, or disembarking a train at some odd little unstaffed station vaguely near a farmer’s field somewhere – but mine usually starts exactly like this: marching through Leeds city centre on the first Saturday in May playing dodge with shoppers, having already had one live set for breakfast.

This task of raising the curtain on summer 2014 falls to OtherPeoplesLives, spreading layers of brooding introspection, piles of spiralling guitar and the occasional puff of dry ice out from the Belgrave Music Hall’s darkened stage towards the sunshine streaming through the back windows. They’re the latest exponents of a grand tradition of Leeds bands – think I Like Trains, Post War Glamour Girls – who mix gothic indie gloom into sparkling post-rock to make something oddly uplifting. “It’s weird playing in the afternoon, I won’t lie to you” says singer Peasey – thing is, it no longer feels weird watching a band at this time of day, especially at this time of year, thanks to the proliferation of wristband all-dayers.

I’ve no idea whose idea it was. Camden Crawl (born mid-90s) was certainly one of, if not the, first – yes, we had Manchester’s In The City before that, but that was very much more of an “industry seminar” thing at first: the performances were open to the public, but they were all either free or individually ticketed. The wristbands only came in the last couple of years of the event, because that’s what people were used to by then. When Salford’s Sounds From The Other City (still going strong every first Sunday in May, and often now combined with Live At Leeds by music fans for whom one day of this isn’t enough) debuted across five invariably dodgy pubs in 2005, it was still all a bit new-fangled; within five years it seemed every town in Britain was having one. I’d love to shake their hand, anyway. As a music fan I love the idea of festivals – the bit that involves being able to watch a load of bands in a day, one after another, including some favourites and some previously unknown. I also hate the idea of festivals – the bit that involves trying to sleep three feet away from a gathering of teenagers trying drugs for the first time with only a sheet of canvas between you and the weather, and the bit where the quieter sections of your favourite artist’s set get drowned out by someone less interesting but louder on the next stage; I don’t even really need to mention the word Portaloos do I? Come midsummer my music addiction will doubtless find me standing in a few fields – generally ones near Travelodges – but if I’m being honest I’d rather watch bands in venues. Lots of bands in lots of venues. This weekend alone, as well as Leeds and Salford, you could watch lots of bands in lots of venues in Liverpool (which Louder Than War did – you can read some reports here and here for starters), York, Leicester, Bristol, Cardiff and possibly any number of smaller events, but it’s this one to which I find myself returning year after year: kicking off at midday and carrying on well into Sunday morning, Live At Leeds delivers a lot of bands for your buck. 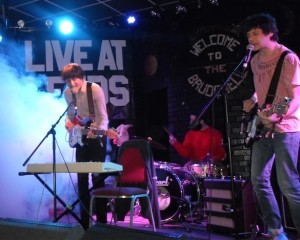 It doesn’t even feel weird power-walking from the Belgrave to the Brudenell in 23 minutes, though it helps to be match-fit for these things. You could undoubtedly have a decent day of it staying in one place, particularly one of the universities running multiple venues inside their students’ union buildings, but where’s the fun in that? The reason for this bout of exertion: IMP (see photo right), a Wakefield four-piece we’ve been intending to revisit since we caught them in an early-doors slot at 2011s Long Division. Thankfully they make the effort worthwhile. There are shades of the nineties underground, especially in the first couple of Pixies-infused tracks, with that joyful edge of weirdness which was all over the original scene but sadly lacking from most of its rather formulaic revivalists. There’s a pig’s head mask hanging off a spare cymbal strut. A loopy organ that lends that air of slightly woozy baroque beloved of the Elephant 6 brigade. Cheery pop hooks that have a tendency to wander off on wayward tempo-shifting prog trips. And a bloke who appears out of the crowd halfway through the last song, does some frenzied air guitar and a handstand in front of the stage then disappears again. May not actually have been anything to do with the band, but doesn’t seem at all incongruous.

Down in the University’s Stylus venue, The Witch Hunt‘s opening song is the sort of thing that just stops you in your tracks with the sheer power coming out of the speakers. Slipping from tender introspection to howling rage at the flick of a guitar pedal, singer Louisa’s like a young Nick Cave in female form, the sharpened point of a classic alt-rock triangle. (Yes, the booklet says duo, but I’ve counted them.) Or nearly: there are thundering drums and incisive, duelling guitars; no bass but you don’t miss it – and believe me, I would, if it needed one. This is forceful stuff indeed even when they drop to one guitar, dynamic and compelling.

Over to the Metropolitan University next; who’s in local DIY-scene favourites Menace Beach today? Aside from the central duo of Ryan and Liza it’s generally people from other Leeds-ish bands, though regular player MJ from Hookworms is absent and there’s a bloke in a Hookworms shirt instead – he called in sick, apparently. Originally famed for their sub fifteen minute sets they’ve got a record out now and people coming to see them who are more than two degrees of separation from someone on the stage, and they almost fill their full half hour – we joke about disappointment but in reality it’s great to have a little more of them. The alternative nineties are the touchstone again here: Ryan’s wearing a Sonic Youth T-shirt with hair to match, and sure enough they deliver sheets of abrasive noise, interspersed with teeth-shredding feedback, all wrapped around sweet, summery little pop nuggets. Lots of bands try to do this sort of thing, but it’s harder than it looks and Menace Beach hit the target with every shot. 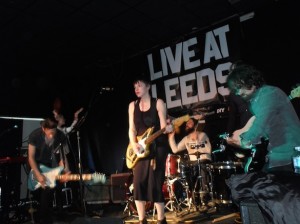 Lola Colt (see photo right) is one of those names that seems to crop up on every psychfest bill – a six-headed storm of late sixties to early seventies inspired psychedelia, flavoured with dusty Americana and sprinkled liberally with a variety of handheld percussion items. Possibly the first time we’ve seen them when they’ve not been drenched in smoke machines, oil wheel projections and rainbow spotlights but instead starkly lit against the black curtains of the side room of a university bar they still manage to sound pretty trippy, and they’re not afraid to rock either – the last song’s a proper freakout that doesn’t want to end.

Late afternoon brings us, as usual, to the Milo’s fringe bash. Always worth a visit, this is the Live At Leeds outpost that gives not one jot about the latest trendiest anything. You don’t even need a festival wristband – I think it’s about four quid in without – to see about 20 bands alternating between its two floors. On the ground floor when we arrive is Percy, a band I feel predisposed towards liking on the grounds that (a) there’s a song on their bandcamp called “Noel Edmonds Ruined My Life” and (b) they always seem to get compared – in a positive way – with Half Man Half Biscuit. This transpires to mean rattling, skiffle-y storytelling indie punk, which is never a bad thing, is it? Would have liked to have seen more, should have stuffed down tea a bit faster. 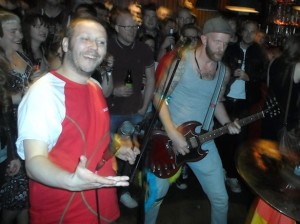 At least we’re inside, though, as the venue starts to fill up for everyone’s favourite local purveyors of recent political history themed punk rock, the ever explosive Kleine Schweine (see photo right). On the one hand they’re wilfully ridiculous, with their daft punning titles (“Lechs Get Ready To Rumble” a favourite of a mate we’ve dragged in for his first and probably not last Schweine experience) and somewhat chaotic approach; on the other hand every one of their 90-second musical history lessons is a grade A thrashy punk shoutalong treat. A Former Yugoslav Republic Of Macedonia flag starts off wrapped round the drums, then round singer Neil, then round said new fan (who wears it with prode for the rest of the day), everyone ends up covered in beer, and it’s all over in a breathlessly exhilarating 20-odd minutes. 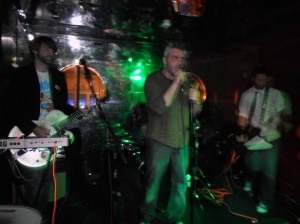 A few hours later, following some business in the Town Hall reported elsewhere, it’s back to Milo’s for one last band. Or indeed two: somehow while we were out schedules have slipped, which brings the unexpected bonus that is The Wind-Up Birds (see photo right). With astute, occasionally funny and very Northern words spilling out like observational poetry, a sound somewhere between Wire and Pavement, and some cracking choruses they are exactly what you need to shake you up a bit when you’ve been out for 12 hours. Even now, writing this, two days and another festival later it’s their “Two Ambulance Day” (as in: if you see one ambulance heading somewhere then it could be anything or nothing, but if there are two ambulances you know something pretty serious has gone on) that’s lodged in my head and there are plenty more where that came from. For example the new single, or as singer Paul Ackroyd announces it “This one’s, like, a single… well not “like” a single, it is a single, and the video’s got sausages in, but they’re veggie sausages, so we’re still right on…”. It does, as well. Look… 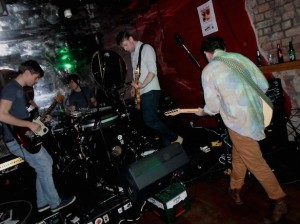 It’s ridiculously late. God only knows what time it is in the heads of young Manchester band Patterns (see photo right), who are setting up on stage having come pretty much straight from Paris where they played last night. They were supposed to be on at midnight, and the crowd has thinned somewhat by the time they finally get going about half past one, but soon they’re filling the space with their rich synth and echoey guitars. A few critics of their debut album have mentioned the fact that a lot of the songs are quite similar in sound and structure – specifically great sweeping dreams of melody underpinned with some unquantifiable foreboding – but this is a slight that’s been levelled at shoegazey bands since the dawn of time (or 1989, anyway). It’s like criticising a traditional “indie” band for using the same chords and a verse-chorus format on a few songs – it’s what they do. And me I could listen to this all night.

Not that there’s a lot of night left at this point. I wish there was, or rather that you could somehow press a reset button and do it all again seeing different things.