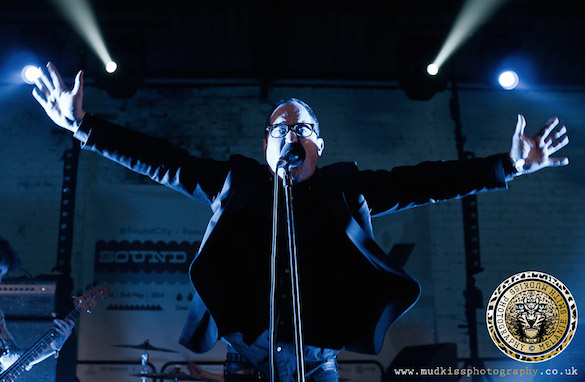 I’m beginning to feel that I’m getting the best deal out of this.

Whilst I’m still lying in bed, having my third bath of the day, listening to some of the bands seen yesterday whilst emptying the Radox bottle and watching the first ten minutes of “Deal or No Deal” ( I have my limits) I am fully aware that there are bands sitting in vans approaching Liverpool, annoying each other by eating horrible service station pies and squabbling over the CD player. I know there’s people tidying up from yesterday and I know there’s people putting the music world to rights over at the Hilton.

I’m sitting in bed again, having ventured out for some breakfast at The Brink whilst Finnish band POOMA were sound checking for a gig they will do there in approximately thirteen hours time. They sound lovely, really good, a band we’d like to think we’ll be watching later on, but realise that by 2am it’ll be throbbing bass lines and shrieking electronics we’ll be after, but we’ll try to find out more about Pooma another day.

I’m about to get up, get dressed and go and see and meet a few of my favourite pop stars. Pop stars that are huge in my world, but maybe not quite yet in yours or anyone else’s except for the numbers that turn up to dance scream, shout, drink, drink , drink drink and wave their hands in the air whilst the people in question do what they do during weekends like this, even though it may only be for half an hour before packing up, feeling disappointed that they can’t stay and see all of their own favourite artists and make the journey back home.

Yes, I feel rather fortunate on days like today that I’m not in a band, don’t need to be anywhere in particular, have little interest in the business side of things, but just want to paaaaaartyyyy like everyone else on the dance floors around the city this first Friday of the month after payday.

Bands then … heaps of them and many of them I listen to on the tubes back home or wherever else I happen to be during the daylight hours between bedtimes and hot meals. Liverpool Cathedral is no doubt my personal favourite venue I’ve ever been in. I’ve only ever seen two gig there. That’s how long it takes to decide these things (Dexy’s in 2013 in case your wondering). JOSH RECORD is someone I know little about except he was on the radio late one night recently and I instantly wanted to hear more tunes. More sought after information on this artist will be found and presented to you all another day and you’ll all need to brace yourself for that bit as there’s certainly not time and space here. His set of pure beauty had us looking at our watches, asking ourselves if it really was too early to begin crying at these angelic falsetto tunes that one feels the world is just waiting to fall in Love with. 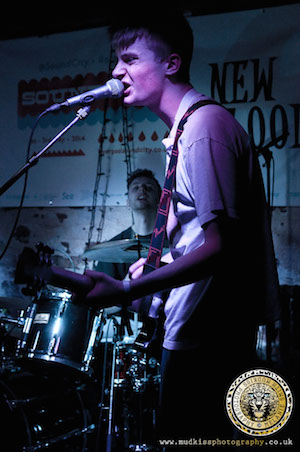 HAPPYNESS (See photo right © Melanie Smith) (remember the Y -it’s necessary in order to find their tunes on the www…..) were spotted in the Capital recently, noted as one to see again and tonight we wonder why we havn’t screamed more about these. Dinosaur Jnr / Buzzcocks / Pavement / Hold Steady soundbites that will encourage the listener to want to know and sing along to one day.

ELIZA AND THE BEAR, as predicted a couple of years ago, are pulling in the punters. Twelve months ago they were standing tall at the much smaller “Mello Mello” venue down the road and tonight they’ve pulled a few hundred and especially noticeable is the teenage mosh pit they’re playing in front of.

WOMAN’S HOUR are awesome, angelic and they make the type of sound we’d like to go to bed to after a heavy night out raving our limbs off to calm ourselves down. However, the night is still young and the arm waving, air punching and heavy drinking is yet to begin for a few of us. Their “Dancing in the Dark” cover was brilliant and brought us some calm before an impending storm.

A quick decision to not bother queuing up in the attempt to see Bipolar Sunshine means we get a couple of tunes by previously unheard of band DELCA KARA who throw some catchy choruses our way before we head off for what we anticipate may be the finest selection of bands I don’t think we could have even dreamed of throwing together ourselves. 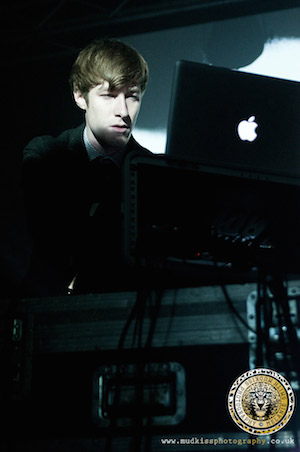 EAST INDIA YOUTH’s (See photo right © Melanie Smith) William Doyle has upped his game since his album came out earlier this year. On a big stage, with big light’s a big screen behind him and a huge sound, we do wonder how long until we see this in front of thousands as opposed to the hundreds we’re watching this with tonight. One hopes this is where late night / early morning dance music will come from at the festivals soon. East India Youth, not content with one of the albums of the year, give the impression there’s still a tank full of fuel still ready to burn and delight us with. A bit early to say, but quite possibly the highlight of the weekend.

FUCK BUTTONS are the perfect band up next. Standing each side of a big table with the odd wire protruding they hit us fully in the face with their electronic noisy beats. We get an early treat in the set of “Olympians”, the crowds are out in full force, we all have our dancing shoes on and to be in rooms like this, hearing noise like this, is something many of us could only have dreamed of as teenagers. Heavy distorted but not uncomfortable noise, slow beats, unpredictable, but very slight tempo changes, layers upon layers of brilliant new sounds creeping into each tune as they plod along and lots of flashing lights all assist in helping us just basically lose ourselves for an hour which I believe, according to the manual, is what this music lark is all about right?

THE HOLD STEADY are magnificent. Husker Du and Thin Lizzy come to mind immediately. They seem to make it all so simple, make us wonder why we haven’t swooned over these as much previously whilst we’re singing along at the top of our voices and thumping the air with delight. We reach the bit where we’re screaming along to “Sequestered in Memphis” before joining a queue in order to not miss out on FACTORY FLOOR.

…Blimey, just watching this trio setting up is a joy to behold. Big, throbbing, squelching beats get the whole room shaking, bouncing and screaming with joy. Yet again, one learns that for some people this is the contemporary dance music to dance around in your bedrooms to before setting out to search for something similar. We’re reminded of those cold dark nights back in the 80s when we stood watching Sheffield’s Cabaret Voltaire in our long coats flicking the ignition switch on this type of music. Thirty years later the bass drums have gotten bigger, with new noises thrown in and withdrawn just as fast causing the hundreds in the room to go mental.

Also going mad around the corner are THE SUNSHINE UNDERGROUND in a packed “Zanzibar”. OK, we get they’re late, but we’ve still got our dancing shoes on and the room is heaving with delight with those still remembering the tunes they thought they’d forgotten having a bloody good sing a long before we disappear into the night and wonder if there’s ever been a better day than today.

Photos of The Hold Steady, Happyness and East India Youth by © Melanie Smith whose website can be found here: mudkissphotography.co.uk.