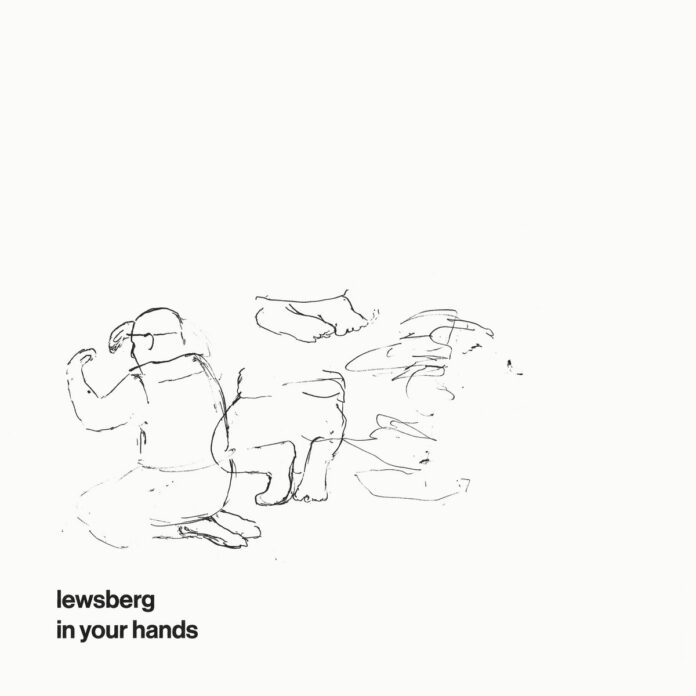 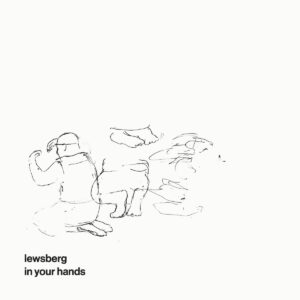 Lewberg: In Your Hands
Bandcamp
Out now

There is no constant but change; an epithet that can currently be applied to Rotterdam’s Lewsberg. A lot has happened to this laconic, quietly influential band in the last two years; personnel changes have seen the employment of a violin and drum sampler. Yet their new record shows that despite fate taking a hand in their creative journey, their core essence remains intact.

The new Lewsberg record is very much a whole trip, one that extends to the cover. The band’s artwork always leaves clues as to who they are and what they are up to. We’ve had a typically utilitarian Rotterdam factory building, a black square and now a Thurberesque sketch showing half-drawn figures on a stark white background. Weirdly, James Thurber, with his sardonic chronicles of twentieth-century American life and wry, sometimes acidic sketches could be the perfect artist for the Lewsberg we already knew. But there is little acidity or artiness in this new folio of songs; rather this pretty short playing record reveals much more about the band as people than their last two records. Maybe I am projecting but these half sketched people denote a process of change, of openness.

In Your Hands, then, does feel like an important step for Lewsberg; if only one that breaks up a perception of what they do. The band could continue mining a very acceptable seam of alternative, arty rock and roll, playing the festival circuit and slowly losing their fire with another appropriation of what their audience would expect. Here, the band’s stark, honest appraisals and predilection for a form of rock minimalism can’t be avoided, it’s what you get, whether you like it or not. The opening cut, Departure, a track sung softly by bassist Shalita Dietrich, is a pretty cool way of saying to the listener that what comes next is not the Lewsberg of old. Glacial, Rallizes-Reed style guitar runs over a rockaboogie beat will have to wait  for a later iteration of the band. Follow up track The Corner is a simple but very affecting song, driven by tambourine and bass and given some shape by a violin. The subject invokes Hank Williams levels of pure loneliness. Then there is the title track which is another, masterful, exercise in stripped back honesty. All that needs to be said is said, and the song stops.

However quiet or reflective a listen, this core concentration on the message of the songs rather than their rhythm is, for now, a big win, we have little to distract us from the words and the strange power the band has of being able to wholly submerge the listener in their sparsely furnished world. Small, quotidian frustrations or behaviours can be heard on tracks like Sweets and Table For Two. Somehow the absence of a traditional rhythm section means what passes for the rhythmic pulses are more marked, differentially expressed. This gives the record a curious power, the choices on how to drive the tracks adding significantly to the moods. Tambourines, bass, guitars and samples all get employed as well as other things; the tick of the metronome on Sweets is cleverly posed against the guitar strum. The tambourine plays footsie with the guitar line on the most groovy of the new songs, Getting Closer, which is a great zone out and maybe a track they should use as a blueprint for future sonic mappings. For its part, Dependency is held together by two guitar lines and what sounds like a floor tom.  It’s never monotonous.

We get the closest we would expect from the Lewsberg we thought we knew is with All Things, which is a fabulously misty, droney, folksy set of soliloquies from Arie van Vliet and Shalita Dietrich. Here Lewsberg is revealed as being a quietly soulful act. This is probably their most humane record, though one that could pivot to further abstractions or wilder experiments in the future. I await the Terry Riley remix with anticipation.

All words by Richard Foster