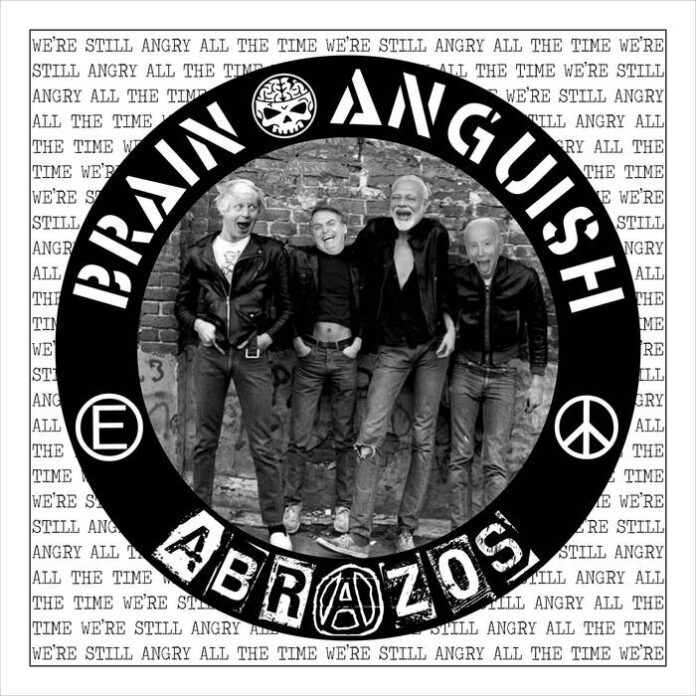 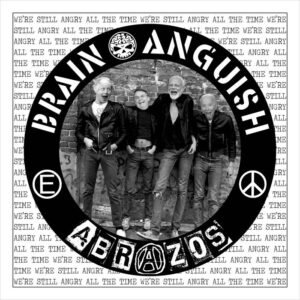 New 7-inch extended play vinyl with one side each from Southampton-based hardcore punk band, Abrazos and their friends, Scottish duo Brain Anguish. It features seven new tracks in total, five from the former and two longer outings from the latter band. Ian Canty gets told to calm himself down a bit…

Hardcore punk rock trio, Abrazos have carved out an enviable live reputation close to their south coast base over the past couple of years. I’ve been lucky enough to see them a few times and they really pack a powerful punch on stage. They present short, sharp and glorious explosions of noise, which tersely pinpoint the unfairness of the modern world in a way that really makes you think, instead of the feeling of being subjected to a lecture. After a quick look at the band’s previous, one shouldn’t be too surprised. When one bears in mind how ace Hack Job, Armoured Flu Unit and Pilger are/were, for instance, it is hardly shocking that the members of those bands should combine so effectively.

Coming in a sleeve that effectively updates Crass’ Bloody Revolutions single for 2021, this new EP is a joint venture with Scottish two-piece, Brain Anguish entitled We’re Still Angry All The Time. Well, if you’re not angry now, it’s more likely than not that you simply haven’t been paying attention. Anyway, on to what is actually contained on the record.

Abrazos’ side of the vinyl gets underway with Angry All The Time itself. Starting with a sample, the band soon piles into a fast, loud and infectious hardcore rhythm. This isn’t musically so much like the great Off!, but there is a similar beauty in brevity at play here. A raging guitar heralds the onset of D.I.Y., which neatly sets out Abrazos’ philosophy for living in one snappy minute. Then Halfcore ably skewers the money-making end of punk rock and the stupid violence and attitudes that come with it.

On Dying In Denial, Abrazos’ hardcore hammers vivisection and its total and utter brutality and needlessness. The band are raw and full of vitality, and like elsewhere, Nath’s rough roar contrasts well with Tony’s more measured tones. For their last track on this record, Tradition, Abrazos again confront man’s vicious and murderous instincts, this time in concern with the pointless and inhumane practices of the ruling elite. Like everything Abrazos do, this tune is noisy and fast, but still accessible and inspiring.

Brain Anguish are much more of an unknown quantity for me, their two tracks included here being my first experience of their particular brand of mayhem. A sample of a speech runs through their initial offering, Fluent In Misogyny. This voiceover succinctly demonstrates the distance that still needs to be covered for society to be anywhere near equal with regard to gender. Musically, Brain Anguish steer near to grindcore here, albeit with a good dose of pure energy and a shouted dual vocal that is passionately accomplished.

Their second and final track, Smells Like Middle Aged Angst, starts with all of society’s ills piled up and reaffirms the angry motif of the EP. Yep, there is a great deal wrong with the world and until we summon up the courage to actively confront it, these things will undoubtedly get worse. Brain Anguish are unafraid to take on these difficult topics head-on. Sound-wise they are a more hoarse, abrasive and sludgy proposition than Abrazos, but they achieve this with a real spark, a rough-edged appeal and some buried gallows humour.

To mean anything in 2021, punk has got to be about a bit more than golden oldie favourites, middle-aged nostalgia for an age that is gone. We’re Still Angry All The Time serves as an important reminder that punk can still confront the unfairness rife in the modern day in an intelligent, raging and engaging manner. On the evidence present here, Abrazos and Brain Anguish are two of the most vital outfits around and We’re Still Angry All The Time positively burns with righteous anger and is damn listenable to boot.

Abrazos are on Facebook here and their Bandcamp site is here