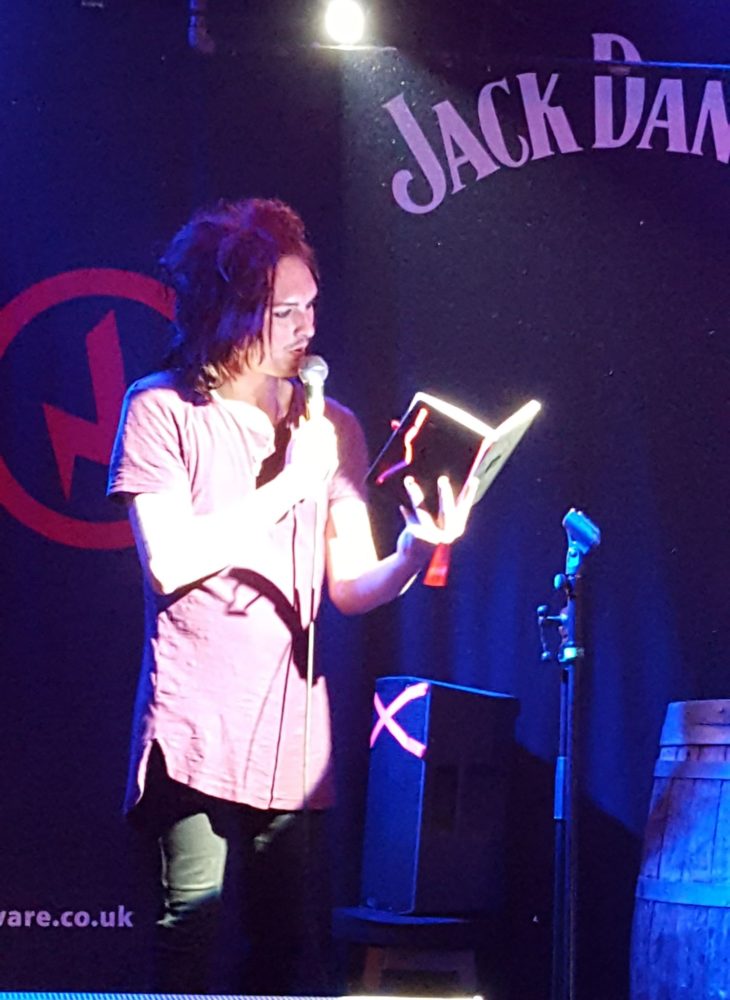 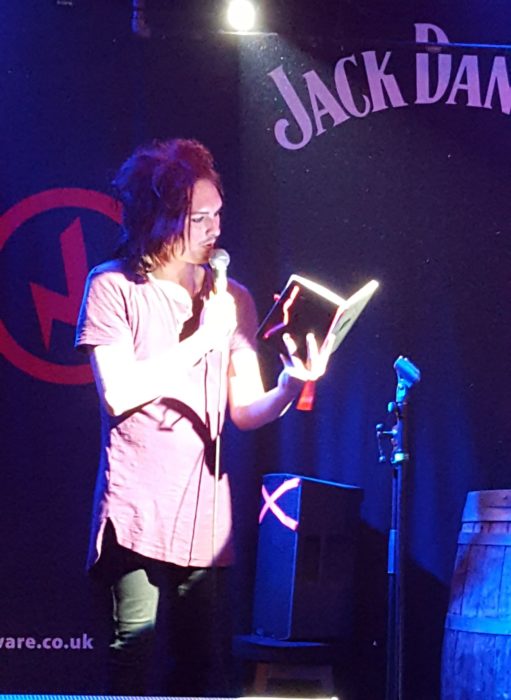 It was an evening of banter, booze and breakup poetry at The Greater Manchester Fringe as poet and comedian Lewis Harlock took to the stage at Jimmy’s NQ on Tuesday 17 July, for his show ‘Neurotica’. Louder Than War’s Emily Oldfield went along to watch…

Pulling a crowd in on a night so early in the week could be considered a challenge – but the room was full not too long after doors and anticipation was buzzing high; suggesting that Harlock is already well capable of attracting an audience.

The night opened with comedian Ed Carfrae warming up proceedings – an energetic character with an eclectic set. Starting at a conversational level, Ed delivered the kind of comedy which kept people on their toes – incorporating interaction and sly digs.

Themes included the likes of takeaways, jobs and life in Lincoln; which I think would have benefited from being slotted together with slightly more synchronicity – as it times the transitions seemed awkward. However, this did add a certain loveable quality to Ed’s eccentric nature, which was underlined by a hilarious final set piece. This consisted of his very own cover version of Bob Marley’s ‘No Woman No Cry’, complete with melodica and mashed-up lyrics looking at life with a bleak but buzzy irony – ‘don’t bother… don’t try’.

Ed also had the audience clapping, stamping and whooping – whipping up further anticipation of Harlock’s performance. This worked well indeed.

Scheduled to last for an hour, ‘Neurotica’ could be considered a brave undertaking by any single spoken word artist – and having seen Harlock perform previously (with spoken word slots at the likes of ‘Bad Language’ and ‘Speak’) I knew his words had the capacity to bristle with wit and arrest the ear.

As a poet myself, I have a lot of respect for anyone who can attempt to deliver a show of such length; and to create and co-ordinate material highlights a real sustained effort. Harlock after all runs a spoken word night in Peterborough called ‘What The Thunder Said’ and his work highlights an array of influences and energy – but would he be able to sustain it for an hour?

The answer is – it lasted for impressively over an hour, though how sustained it was… another matter. Harlock started by addressing the crowd, cracking open a few themes of the show: heartbreak, his mind – and lots and lots of booze (he downed pretty much a whole bottle of red whilst on stage) – all whilst maintaining a sharpness.

Initially, the act played between conversational comedy and lapsing into poetry; Harlock highlighting the very human experience and flipsides of falling in and out of love. His poems pull together observational aspects, hard-hitting feeling and humour; the type that take you by surprise and pop with imagery. The pace could have worked, kept like this – but then things started to descend a little.

The heckling began – at first a few lone efforts, then developing even more endurance. Harlock seemed – to his credit – to synchronise it into the set as much as he could, bouncing back with the banter and delivering diverse situational wordplay which worked. However, this also had the effect of breaking up the poems, detracting from the pace of ‘Neurotica’ as a show and crushing the emotional intensity; leaving a feeling of uneasiness and tinges of apathy as we watched and watched.

The banter continued, and so did the comedic responses. Yet this then ran into people in the audience openly talking through the performance… perhaps an indicator of what happens when the crowd are given too much of a reign over what happens on stage. Harlock is a clever and capable wordsmith – both in poetry and comedy – but an element of control was needed to keep the performance slick. I wanted to be kept on my toes, not tapping them – though I am conscious that I am writing this as an audience member who was not as much part of the banter; and to those involved in the exchanges, it might have been a different experience.

Indeed, there were bursts of brilliance – particularly in the poetry – well-worked allusions to Ezra Pound, poems contemplating bad housing brought to life with line-end rhyme and characterful drawl. But the poetry collapsed too often and the crowd grew too dominant.

A case of experimenting in too many disciplines and muddying the mood? Perhaps. After all, to string poetry, spoken word and stand-up all together is an ambitious undertaking. Of course, tapping into the turbulence and titillations of reactions to rejection can be funny, but too many obstacles in the flow hindered Harlock here.

He closed the set, running close to 11pm, with two poems and then a sort of soliloquy – commenting on how actually lucky he was to have felt such love. It was expressed in a way that was emphatic, emotive even, but as the surrounding mood was by this point very unsure; I wasn’t quite sure how to take it. Indeed, to keep a performance carrying on for so long and weaving in words of wit amongst the midst highlights key aspects of Harlock’s charisma and ability (his open mic is particularly good), but this seemed a night ruled by a comedy crowd and crashes in feeling. I wanted to see more poetry from Harlock… and I’m indeed sure there is plenty more to come.

To see a slicker set, perhaps with different staging – I’d be totally up for. In the final minutes, watching him smash out well-worked words of injury along with that brilliant sharp irony, underlined an artist who is daring and deserves to be listened to.

Photography: with thanks to Helen Darby
By Emily Oldfield