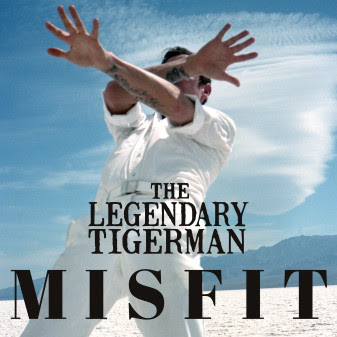 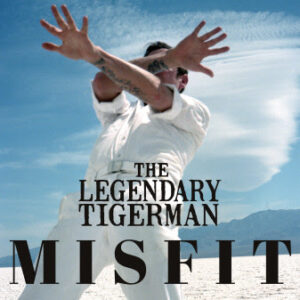 Portugal’s blues-punk superstar Legendary Tigerman returns for his sixth album, Misfit, and finds himself on a desert-set road trip tale of one man’s search to become nothing. Dirty Water Records score a coup with the UK/US release of this fantastic modern-day concept album.

In a society of drifting alienation, chained in a struggle to make oneself heard, noticed, validated, and loved, one man disconnects, drops out and embarks on a journey of self-discovery in the pursuit of non-existence. On a twelve-day road trip from Los Angeles to Death Valley, Portugal’s prodigal blues aficionado and multi-instrumentalist Paolo Furtado, a.k.a. The Legendary Tigerman, immersed himself in the skin of the philosophically disturbed protagonist of his own story. Each day he would rise, drive, scribe and, by night, armed only with his guitar and the solitude of a motel room, pen the songs that would eventaually make up Misfit. Recorded at the legendary Rancho de Luna studio in Joshua Tree, California, his sixth record is possibly his greatest one to date.

Lead single Motorcycle Baby kicks off the album with a bruising balls to the wall classic rock riff, drums cracking and pounding to create a dark disco beat that rises up from a menacing croon to grooving choruses that hook you in from the off. It’s a potent opener of sweat-dripping desert rock. Close your eyes and you’re in his classic convertible, top down, racing through the dust and sun. A wailing saxophone creates a paranoiac wall of sound before the song drops off and into Fix Of Rock’n’Roll, a Black Rebel filtered No Expectations tale of dirty desire.

It’s not all about banging rock ‘n’ roll though as the album is painted in different palettes. The Saddest Girl Of Earth slouches along in a haze adding a plaintive hue to the distorted sound that engulfs the song before Red Sun seeps in over a pulsating and hypnotic undercurrent. It’s the sound of a peyote-induced resurfacing of consciousness, held somewhere between the real and unreal and being led further into the unknown. “Follow” the spirits whisper, “Fire” they warn. Sleeping Alone kicks in quickly with a tease that sounds like the band are about to drive into a blues-rock pounding of Bowie’s Let’s Dance, but it quickly drops off and into a sultry groove. It’s a tale of desired lonesomeness plenished with glorious harmonies and layers of alternating distorted waves not too far from Eels’ territory, and he heads further that way on the jaunty yet devilish Child Of Lust.

On Black Hole Tigerman is at his most dramatic, the song crescendoing with driving intensity, while the following Holy Muse sees him drifting arm in arm with Tom Waits through his more intense barroom brawlers. Penultimate track, About Alice, brings back the more dancey groove, albeit under a sparser and more jagged instrumentation, before he signs off the record with the boozey To All My (Few) Brothers which drifts off into oblivion. And for those shelling out on his new LP through Dirty Water Records, as an addition and celebration of all things Tigerman, there’s a bonus EP: Misfit Ballads. On this bonus EP, he shows his sweeter side as the songs drift breezily along, closer in style to tracks from his previous album, True. He throws in a beautiful woozy cover of Tom Waits’ Tango Till They’re Sore alongside three of his own that skirt close to sounding at times like Leonard Cohen. It’s a great addition and accompaniment to the record.

On his sixth album, Misfit, The Legendary Tigerman has crafted an exceptional record that really sees him pushing his own musical boundaries, while clearly within his chosen story arc. With his previous album, the cat poked its nose further out of the bag, but with this release the tiger is roaring for all the world to hear. Time will tell if they sit up and listen, but those who do so are in for a treat.

Watch the videos to Motorcycle Boy and Fix of Rock’n’Roll below:

Misfit is available in all formats via Dirty Water Records through The Legendary Tigerman’s Bandcamp page.