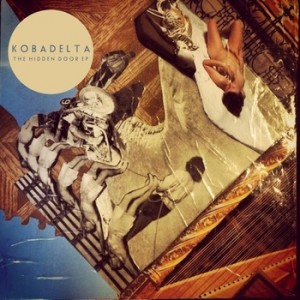 So what’s this Newcastle thing that’s going on, eh? Last week Bernaccia graced my ears with their wonderful Cinema, now I find the new Kobadelta EP daring to permanently fix itself to my cd. Its five tracks, each one able to stand tall on its own merits, are delightful slabs of neo psychedelia, blues influenced indie pop-rock.

Clear hints of The Doors and the Bunnymen form the base with a Kobadelta twist thrown in for good measure to complete a brooding, often haunting sound.

Opener, Supernatural Cause, plods into being with a confident and comfortable swagger, possibly hints of Nirvana grunge in between guitars which almost distort but are finely controlled on the mixing desk taking the sound as far as it can possibly go. It’s not just cracking melodies either, lyrically Kobadelta are special too, telling stories along the way.

There may even be hints of The Arctic Monkeys here too, but essentially Kobadelta take their influences and weave them into a sound which is very much their own. Electric Chair throbs along with a cracking bass line and some awesome lyrics – ‘the bosom entices, go suck on your thumb. I’m trapped in the Abbey with the bisexual nuns’.

Love Stoned Chic is as Jim Morrison as it gets. Wonderful stuff. Lazily buzzing along with a degree of maturity that you rarely get from a young band. They clearly exude a confidence and swagger beyond their years.

Not Above And Not Behind takes a more subdued tone with murder ballad-type dark lyrics describing a dead love ‘I took a branch out of the family tree….. you’ll always walk beside me’. The title track again is slow paced with brooding lyrics, up there with the best of modern poetry and still packing a punch.

In short, this is a superb collection with five tracks each worthy of being credited as the lead. Haunting, mesmerising and powerful. You haven’t heard the last of Kobadelta.