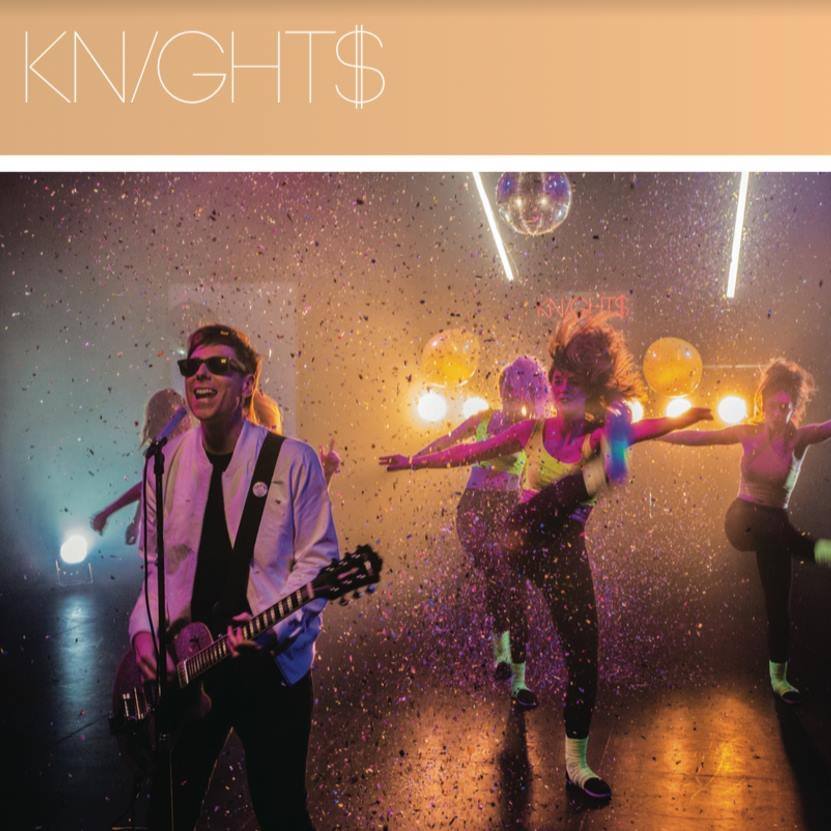 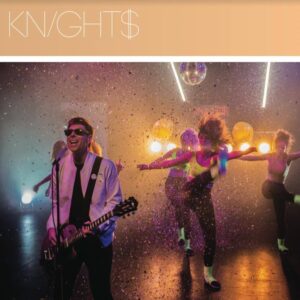 The promo video is probably the corniest, cheesiest  most clichéd 1980’s pastiche you’ll ever see…. but is the EP any good?  Ged Babey asks….

KNIGHT$ is a UK artist with a knack for penning some memorable electro anthems. Whether with a full band or simply stripped back with a pianist, KNIGHT$ delivers. With one foot firmly in the present, and a discerning knowledge of music’s past, KNIGHT$ might just be the newcomer to occupy your sound system into 2017.

Yeah, yeah, yeah…  but this is Jim – a guy I know from a hundred gigs in Southampton amd Winchester. Unfailingly polite, with a winning smile, a youngster who lives and breathes music, whether as a promoter, doorman, studio boffin or performer. I’ve seen him countless times, but don’t really know him at all.

Cutting his teeth in projects such as Scarlet Soho and Boytronic. KNIGHT$’ started working on the tracks What’s Your Poison?, So Cold and What You Leave Behind in 2016, alongside producer Martin Dubka (Tesla Boy/Tyson/Ali Love) in Hackney, London. Even after a short time in the studio Dubka and KNIGHT$ developed an almost telepathic understanding. It was clear the initial tracks needed to be concise, with super strong stick-like-glue melodies. KNIGHT$ would programme the midi, with Dubka working overtime, patching in an array of vintage analogue synthesizers and getting the sounds just right. They would occasionally stop for coffee, listen to “Time To Move” by Carmen, and swiftly move on. By the time they were finished, KNIGHT$ knew he had something pretty unique on their hands!

KNIGHT$ holds undeniable magnetism live, but there’s a palpable substance to all he turns his hand to. Just when you think you have this guy sussed, he will offer you something different, something you never saw coming.

He was/is in Scarlet Soho and his partner is in Capital X and he seems as obsessed with the synth/electronic sound of 1981 as I am with the punk rock noise of 1977.  I wanted to understand ‘why?’   But first, here is the video, in all its cheesy glory….

James, Jim, or should I call you Knights…?

What happened to you?  why are you so in love with the Cheesey Electro Pop sound?  You’ve always got a guitar hung round you, is that just a prop?

All the songs, and the Scarlet Soho songs are always written on guitar. I just move them over later to keyboards.

That seems an unusual way to do it?

I’m not sure really. It’s just a formula that works for me/us. I always saw it like some song recordings really need it, and others not so much. I wouldn’t want to wedge it into every track just for the hell of it.

What was the first record you ever bought? Was it guitar-based or electronic?

The first 7” record I bought was Paradise City by Guns N’ Roses, or was it Straight Up by Paula Abdul? Either way, the combination of both could explain how I got to where I am as KNIGHT$. In my childhood home Mum would play old Motown, Dad would play Creedence Clearwater Revival, my brother Gareth was a Clash, Jam and Joy Division guy and my sister Ayshea was playing Madonna and INXS, so it was a real mixture.

But surely you wanted to be in a rock-band as a teenager?

I was sixteen when I was finally given an electric guitar by my folks. It had Judge Dread on it. Then I convinced other non-musicians from the neighbourhood to be in a band with me. We had so many band names in the first year and by the time we played our first song all the way through (“Teenage Kicks”) we were called Elementary. We were terrible, we knew it, but we were determined to improve. We were style over substance for sure and a wind up band. We liked the front of the New York Dolls and Manic Street Preachers at the time, and spent more time deciding what to wear rather than rehearsing.

By the time I was nineteen I had a better idea of what to do, and fortunately I met Scarlet to form Scarlet Soho. She had a similar take on what was required at the time. The sound we developed opened the door and gave us gigs across Europe. There’s no doubt these trips shaped our sound a bit.

You’ve always worked at local venues haven’t you, how has that changed your musical outlook?

I’ve worked in venues for ages. One of my “jobs” was to do the door while the bands were on. Over the years this “Pop” music I make became the only place left for me to go to: the only sound not being represented in clubs I was playing, and that suited me, and my voice. When working at the club I would usually load in four geezers, with the same stage set up as every other band I’d seen, fake anger, over-priced amps and guitars, and no passion or character to their performance.

For me creativity is a release and a chance to escape from the mundane. I just saw people taking the mundane with them on stage and polluting the room!

Live, there has to be more to it than just giving people what they expect every time.

People use this term “guilty pleasures” with music, and it’s cobblers really. You’re allowed to like what you want. Don’t make excuses. It’s like when rock bands do cover versions of famous songs it becomes acceptable all of a sudden? It’s the same bloody song. It hasn’t changed from bad to good because someone stuck a guitar on it.

People don’t want to admit to liking ABBA, but a good song is a good song. If you do say something political within a pop framework you also stand a better chance of people hearing it.

I’m more than happy to play my music where it’s not wanted. Support slots with Sham 69 or Spear Of Destiny don’t phase me. I enjoy the challenge and the banter with the crowd. The clued up people in the audience know exactly where I’m coming from, and that’s good enough for me.

There’s a fine line between the ridiculous and the sublime, and I don’t mind treading that line for the entertainment of others. Being part of a tribe or scene has terrified me over the years. Seeing people blindly follow a group, watching the bands’ musical quality drop with little appreciation of the fans supporting it. I always felt songs should be judged on merit, whatever the genre.

These days people would rather see a fake up there doing his thing. Stomping around with all the gear and no idea. They just ignore the music and consider the person to be a maverick. It rarely seems to come from the right place. They should watch a documentary on Sylvester. Then the penny will drop.

As well as electronic versions Jim can pull of a nifty piano-backed torch song out of the same track, which is indeed, impressive, if equally cheesy.

He is a talented guy who loves what he does and is serious about producing music of quality and distinction as some-one once called it. I can’t pretend I’m convinced but I can see that there is a huge potential audience for KNIGHT$ if only they’d stop watching Saturday Night TV and seek out some new music instead of cover versions.

And I really want to hear how KNIGHT$ goes down on Steve Lamacq’s Round Table !