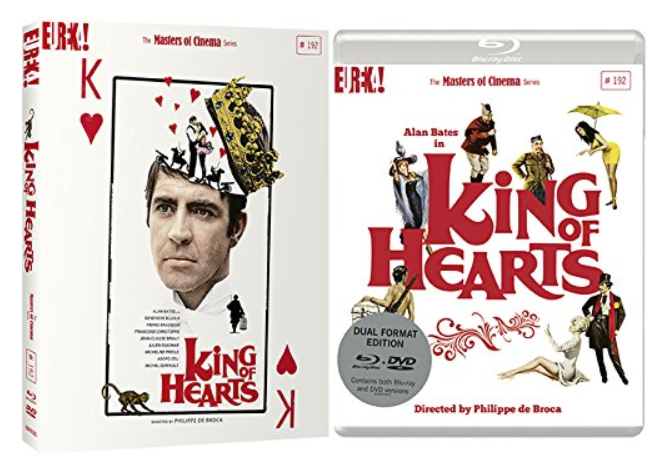 Jamie Havlin gives his opinion on a cult anti-war comedy from France that flopped on release before striking a chord with American youth in the days of the Vietnam War.

Philippe de Broca is an interesting figure. He emerged during the French New Wave and served as an assistant director to Claude Chabrol and Francois Trauffaut. His own work, though, was often very different from films like Le Beau Serge or The 400 Blows. Especially King of Hearts.

Set in the late stages of the WWI, Alan Bates (A Kind of Loving, Far From the Madding Crowd) plays Charles Plumpick, a French-born Scottish soldier, who is sent by his commanding officer to disarm a bomb placed in a medieval French town square by the retreating German forces.

On his arrival, he frees many charmingly eccentric characters from a soon-to-be-abandoned local asylum. As they embark on a new world of freedom, these men and women invent new identities for themselves, dress themselves as cardinals, hookers and nobility, and lead their lives as if it is one big carnival.

The depiction of these former inmates could admittedly prove problematic for many modern viewers. This is a wildly idealized portrayal of people with mental health problems. If this makes you uncomfortable, remember every character in the film is a caricature. The director is keen to contrast the good-hearted playfulness of those deemed ‘officially’ mad with the bumbling commanders on both warring factions engaged in the sustained carnage of a pointless war.

Where does the real madness lie?

A simplistic message, sure, but undoubtedly a well-intentioned one.

King of Hearts, though, is just as much a love story as a war story. The romance here involves Plumpick with Poppy, played by a very young Geneviève Bujold (Anne of the Thousand Days, Dead Ringers). This aspect of the film is more satisfactory and as the story unfolds and Plumpick begins to reciprocate Poppy’s feelings I begin to be seduced myself by the director’s vision.

There are some beautifully choreographed Fellini-esque celebrations such as a man playing chess with a chimp, marching bands and a carriage led by a dromedary. Expect bucketloads of absurdist humour too and a clever homage to Harold Lloyd’s famous clock scene in Safety Last!

Pierre Lhomme’s cinematography is stunning throughout and the colours in this 4K restoration truly zing.

On its initial release in France, King of Hearts under-performed at the box office. It fared better across the Atlantic, where it slowly gained cult-film status. By the mid 1970s, the movie was showing in picture houses across America. Astonishingly, it ran at one, the Central Square Cinemas in Cambridge, Massachusetts, for a five year period.

Extras include a feature length audio commentary by film critic Wade Major, a 2017 interview with Geneviève Bujold and a collector’s booklet featuring a new essay by Philip Kemp.

For more on the film: https://www.eurekavideo.co.uk/moc/king-hearts-le-roi-de-c%C5%93ur