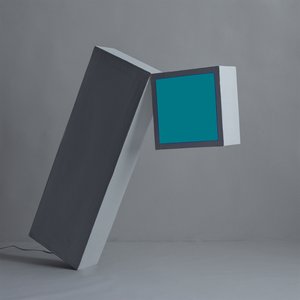 That they do so with a combination of affection, irony and ennui makes it hard to tell exactly whether Bodega are the most hipster band you’ve ever seen and heard, or so meta that they’re at the bleeding edge of post-hipsterdom, sending themelves up for their own – and our – amusement. Or, more likely, both. Does it matter? Not when they’ve got the music to match their ambition and songs like these.

Deeply in debt to CBGBs and the punk bands that made Manhattan the birthplace of that musical revolution 40 years ago, and even more so to the minimalist post-punk bands that grew out of it, especially Wire, Delta 5 and The Fall, Bodega’s superficially primitive but cleverly crafted songs are so perfectly formed that it’s sometimes hard to see the line (if there is one) between hommage and pastiche; even the cover photo depicts a fashionably minimalist sculpture by one of the band.

Bodega are not only from Brooklyn (of course) but from its most fashionable hipster outpost of Bushwick (ditto). They are three girls (Nikki Belfiglio, Heather Elle and Montana Simone) and two boys (Ben Hozie and Madison Velding-VanDam) but mainly they’re Ben and Nikki, who were trading until two years ago as Bodega Bay, a band whose short sharp songs about nothing much in particular were a kind of practice run for the more sharply focused unit they are today.

Hozie plays guitar and sings and the bespectacled Belfiglio plays a cymbal and jumps about a lot and does funny dance moves with her arms – and sings – while the other three do the usual stuff of playing guitar (Velding-VanDam) and bass (Elle) and drums (Simone), except that she plays the drums standing up, like Mo Tucker. Their songs are mostly two minutes long (there are 14 on this 33-minute debut, produced by Austin Brown of Parquet Courts) and many of them are introduced with computer-generated samples: Bodega Birth, as its title (and the album title) suggests, sets the tone for the album’s theme of a life dominated by screens and keyboards: “I use my computer for everything,” announces a disembodied voice. “Heaven knows I’m miserable now.”

It’s so arch, so ironic, so contemporary and meta, that part of you wants to hate it (they even incorporate The Smiths song into their live act, a boisterous affair that’s somewhere between a dance party and a children’s party), but the other part of you is too busy dancing and singing along to care. This is Bodega’s skill: simultaneously celebrating and mocking their own lives and that of their audience; and doing it to a soundtrack of primal drums and jagged guitars with whip-smart lyrics and shouty boy-girl vocals that recall The B-52s.

Can’t Knock The Hustle, a live favourite with its repetitive stop-start guitar riff, is pure Elastica, while the woozy Jack In Titanic is the pop song Pavement never wrote. There’s depth bethind the tunes: How Did This Happen conveys the helplessness of a world where empty protest has replaced action, where consumerism has supplanted rebellion: “I see you walk past the demonstration / Two chips on your shoulder”… “Stuck wading through a crowd of radical daughters / Barricades armed by empty strollers / Basic slogans to combat controllers”. Meanwhile, lest things seem too serious, Name Escape simultaneously celebrates and sends up the inescapable irony that, in their earnest attempts to be individual, hipsters inevitably end up looking and behaving exactly the same (beards, tattoos, piercings, vintage clothing, bicycles, craft beer).

Brooklyn for people in their 20s in Trump’s America is a world where, as the album title suggests, life is lived at one step removed from reality, endlessly scrolling through playlists, people and porn, resulting in a sense of alienation even at the most intimate of times. “I touch myself while looking at your chat text box,” confides a robotic female voice at the end of Margot, underlining the experience described enthusiastically by Belfiglio in Gyrate. But Endless Scroll is not all irony overload and Charlie, a wistful elegy for a lost friend, suggests that beneath Bodega’s thin veneer of irony lies a beating emotional heart.

And if you’re still left wondering whether they are the very thing they profess to criticise, there’s a clue to their philosophy in the motto that adorns their social media feeds: “The best critique is self critique.”