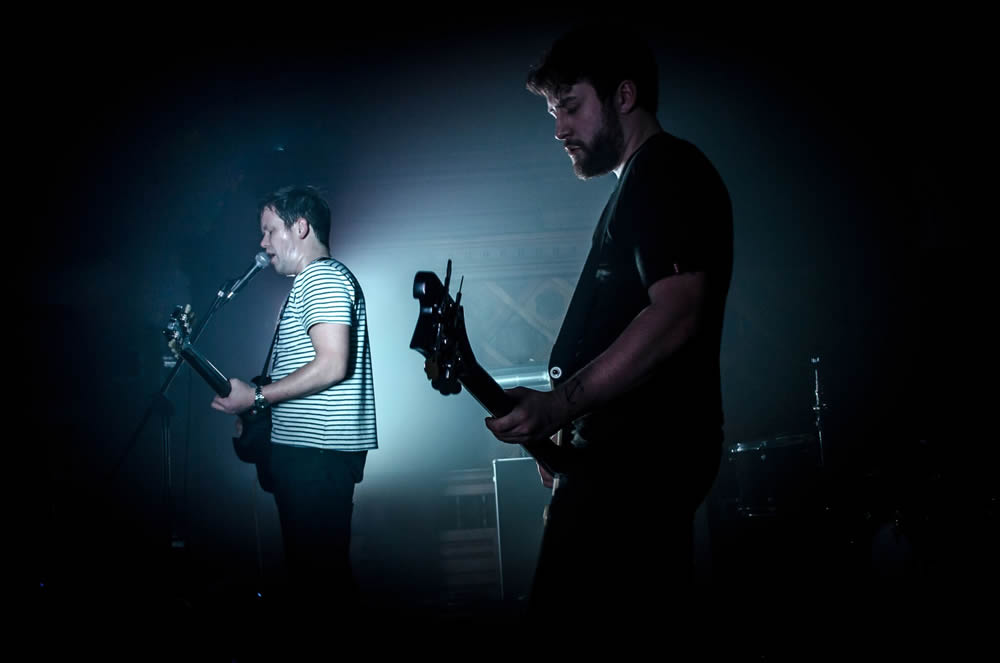 Manchester’s Ist Ist are joined by Sly Antics and Jekyll as three of the city’s hottest up and coming bands hit Salford’s Sacred Trinity Church. Nigel Carr reports back for Louder Than War.

Just out of the centre of Manchester, across the canal and we’ve slipped forty years back in time. There’s a battered old pub on one side of Salford’s Chapel Street called ‘The Rover’s Return’, serving the best Carling in town at just £2.95 a pint. According to the barmaid; “Coronation Street tried to sue us for the name but we were here first”.

On the opposite side The Sacred Trinity Church, which has had all its seating removed for tonight’s event. Andy Salmon, the Rector, smiles affably as we file in and queue up for a drink. Hats off to him for not only being present tonight but for dedicating this fine old Victorian building to a series of evening events this year.

Jekyll squeeze between the huge speakers at one end of the hall and take their place in the hallowed area of the choir beyond. It’s a few months since I last saw them at the Soup Kitchen in the Northern Quarter and they’re now joined by a remarkably accomplished player, Mike, their new guitarist. He perfectly complements Joel out front; a man, if rumour is to be believed, who has been practising in the dark!

Their brand of almost operatic, anthemic rock seems strangely appropriate in this religious space. Their playing, tighter and more formed than ever. Comparisons with Muse are inevitable as they launch from one expansive soundscape to the next, culminating in the simply awesome Maniac. It lurches between full on freak out and false endings before cranking up with searing guitars, eventually crashing to a close. Joel nails the vocals, his choirboy tones seeming rather appropriate. Very much the leader of this band he falls to his knees in the darkness as the supporting cast thunder on around him.

It’s a cracking gig for Jekyll who wrestle with a slightly over driven sound system. Like all the bands tonight their ardent followers pack in front of the stage.

Sly Antics’s have been making huge waves on the local circuit with their unique brand of funk tinged rock. Their show at The Ritz last year saw lead man Sam Buckley Hudson using up every inch of the stage, charging around like a man possessed. It’s a bit tighter for him tonight but it doesn’t stop him tearing up the place with a hugely powerful performance, including last single Captive City and current release, Lights Go Down.

It’s high drama with Sam acting the full on rock star, all arched back and posturing before dropping to his knees. He’s got a huge voice and uses it to full effect rattling the beautiful stained glass windows in their frames!

Sly Antics deliver the kind of rollicking rock and roll melodies that any top flight rock band would be proud of, peppering the sound with thumping funk as new bassist Chris slots in perfectly.

Next up it’s the dark melancholy of Ist Ist who’s career is very much in the ascendant. Their majestic style of almost unbearably powerful, bass driven post-punk is bewildering at times; haunting and hypnotic whilst retaining an air of humbleness and honesty.

I have compared them to Joy Division in the past but there is much more to this band than that. It’s like the soul of that band has been interbred with the darker strains of Bauhaus and The Sisters of Mercy. Their proclivity for trance style repetition and beats melt your brain, taking you higher; the perfectly punctuated, persistence of Adam’s delicately deep vocals sending shivers down your spine.

New track Silence is the perfect distillation of the band’s sound. A huge hook surrounded by a dark swirling melody. It’s enriched by a touch of electronica in the scratchy effects that slide in almost unnoticed, but are an essential part of the mix.

The band have exploded northwards both in terms of creativity, style, confidence and proficiency. Even the pure punk of Rats and the hauntingly beautiful Emily take on new personalities in these surroundings, as the venue seems to suit them perfectly.

White Swan is where I came in with this band, having heard it first on a Mr Peeps Podcast. Its incessant driving beat, deep bass groove and deliciously emotive lyrics still stand as a glorious centrepiece to the set.

This band have Manchester running through their veins, hear them once and you know what city they come from. They now need to get out of it and show the country what they are capable off. Go and see them, you will not be disappointed!

All photos are copyright of Trust A Fox. More photos can be found Here.

Please do not use either words or photos without the express permission of the copyright holders.