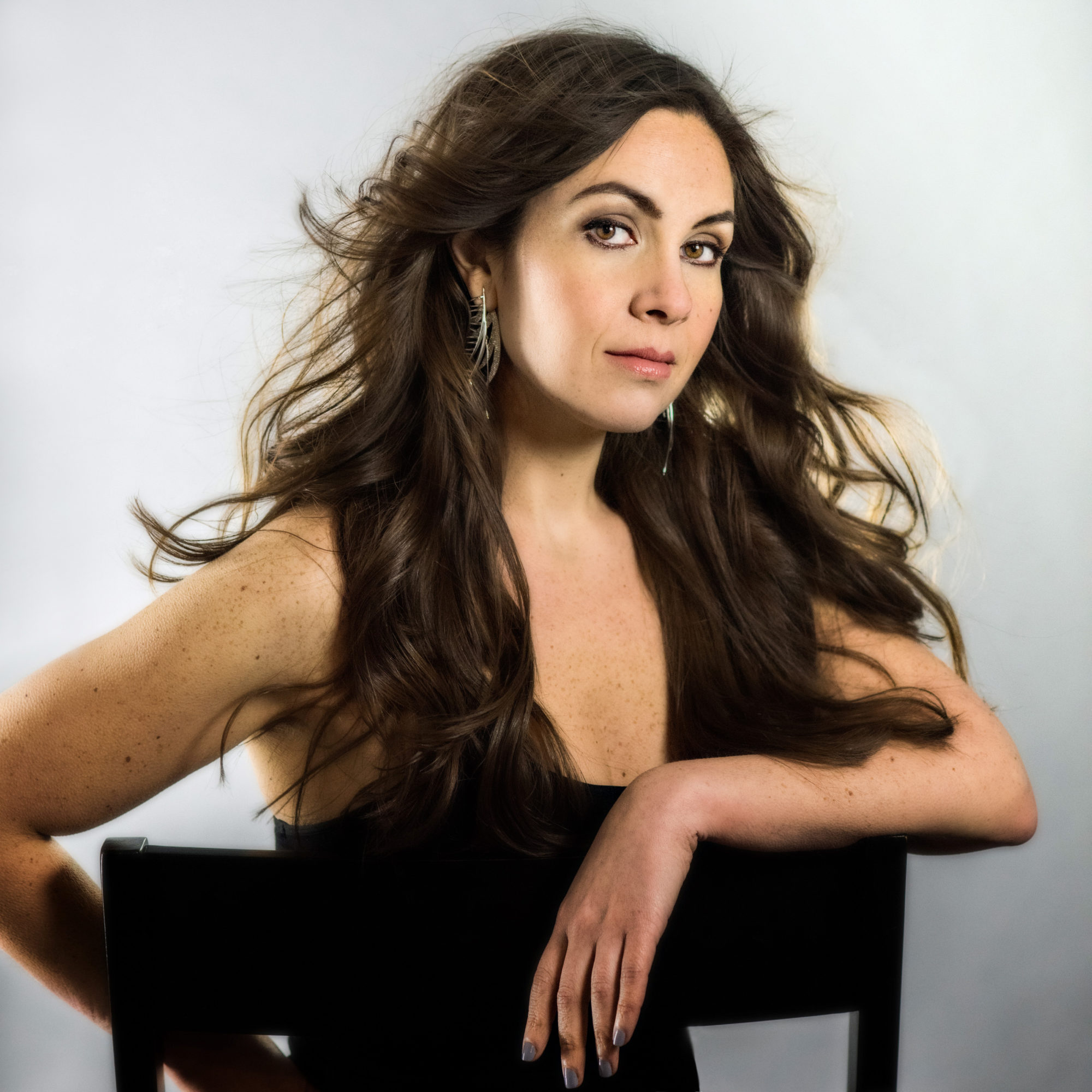 Jess Pomerantz is well on her way to a splendidly elevated career, with her new debut album, Simple In Disguise. Having just come off of headlining at the One World Trade Center Observatory Exhibition: The Rolling Stones Edition, this past January, she will be heading to the iconic Bitter End on 3 March. 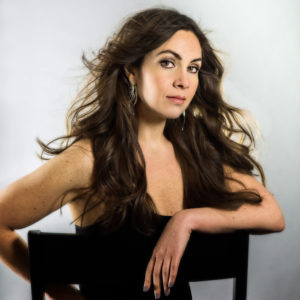 Singing is certainly something Jess was born to do, as her cousin was the legendary Phoebe Snow, who was one of the performers at Woodstock. Jess prides herself on being mentored by her late cousin, and shared some stories with Louder Than War.

Louder Than War: This past January you appeared at the World Trade Center for Observatory Exhibition: The Rolling Stone Edition. That’s something very unique, what was that like?

It was fantastic. It was a totally unique opportunity. First I have never even been to the Observatory, which is absolutely amazing. I can actually see the Freedom Tower from my apartment. It was kind of cool to see that view, and to connect with New York City on a different level.

Then playing the Stones…I like the Stones, I grew up listening to all of that music. I was never a die hard Stone fan, but I fell more in love with them as I was rehearsing for this event. It was very different, we had to play a strip down acoustic set, which I typically don’t do. The sound system there was not a full on sound system. Hundreds and hundreds of people were there for the Observatory. People would just stop and listen to a few songs, and then I would see people come back around and listen to more. It was very special.

You’re also scheduled to be at the iconic Bitter End.

I am. I’m actually playing this Friday at Mercury Lounge. I am playing the Bitter End on 3 March. I love it there it’s a very iconic venue. All of the big guys started over there. The first time I ever played there which was many years ago, I loved seeing the sketches behind the bar, of Joni Mitchell, Jackson Browne, Bob Dylan, I love those artists. It feels like a very special place when I play there. My cousin played a lot there when she was still around.

How close were you with your cousin Phoebe Snow?

So, I didn’t get close to her until I was about 17. Then we got really close and I spent a lot of time with her. We had a very interesting relationship. She was just a very special woman. I don’t know why I remember this as my most vivid memory but, the first time I ever spent time with her without my parents there, I met her in the city. I was still in high school, I met her in the city, and she took me to a vegan restaurant. She was always trying new eating habits, which is so funny, because so do I. We had lunch, and then we went to her voice lesson. I remember being very confused as to why this woman who in my eyes was very successful, was taking voice. She kind of instilled in me that, it’s your instrument, and to treat it like it was your muscles. I was a big tennis player back then. She always said “why do you continue to work out, why do you continue to stretch your muscles, and do all that stuff for your tennis game”…. She said, “it doesn’t matter how famous you are, the more and more you sing and perfect you’re on, and make sure that you maintain it”.

Growing up I remember hearing her sing the the Folgers coffee commercial. I was five or six and my mother said, “that’s  your cousin”. She had this deep soulful voice, that I honestly thought she was a black woman. So we went to this voice lesson and she started singing opera. I remember my mouth dropping on the ground at this woman’s range. It just flawed me. Then she made me sing, and I was super shy about that. She made me do a scale. I hate how vocal warm-ups sound, they had never really sounded pretty. She started crying. And my most distinct memory is she said to me, “I don’t know where I am going to be, or if I’m going to be alive, when you finally make it. But you have to know that wherever I am, I’m going to be watching you. If you do not pursue your voice and your talent, I’m going to be very angry”. I feel like she knew she wasn’t going to live. We had a really incredible bonding over it, and then she took me to CHAND at a Buddhist temple for three hours. Our relationship grew from there. Our great grandparents were Holocaust survivors. So we visited the place, we grew up as grandchildren of Holocaust survivors, which is a very intense place that we kind of drew our stories.

This whole story is very intense to me.

She was really such an intense woman, but in such a beautiful way. She kind of let me into places where I feel she didn’t let a lot of people in. She was very self-conscious and always very critical of herself. It’s so funny because I see these traits in myself, and in my writing, but I would never have been able to tell you that when I was 17.

I guess you started singing before you were 17?

Oh yes, I guess I can. I’ve been singing as long as I can remember. The first time I remember ever being told that I had a good voice was when I was 13 years old. I sang It’s My Party by Lesley Gore, and the mean girl in school told me I had such a great voice. I remember being shocked that she was nice. It developed from there.

My Canter, who is training me at my Bat-Mitzvah, said I had a really beautiful voice, and I was so shy that you couldn’t have paid me to sing in front of anyone. Then I started doing high school musicals, and that’s where I really started performing. Then I went to college and I wasn’t performing. All of my friends were saying that I always talk about being a singer, but that I’m not even doing anything. One day we were at a bar on campus. Every Tuesday night this guy came in to play cover songs. My friends finally made me get up there and sing. So I sang, Me and Bobbi McGee, and it became a regular thing, singing with this cover band. That’s when I started writing my own stuff. That’s kind of where it took off.

You have a new album coming out now?

I do. It’s called Simple In Disguise, and I released it on Spotify. It’s a five song EP, and I’m writing more every day. The songs are really meaningful to me, and the single especially, Simple. It’s my nod to not writing about love, because I feel like a lot of my songs tend to go that way. This one is about me connecting with myself. I wanted to write it in the perspective of the kids who were bullied in school. I was made fun of in eighth grade, and it really affected me. I kind of wrote to the girl that bullied. “I don’t care for make up and blush, but you own stock in vanity. You lay it on thick when you’re all done up, but you are so simple”. She really brought all of her issues and her own insecurities with that make up. So I’m trying to speak to the person that’s trying to conform to something that they are not, and who thinks that’s what they should be doing. I also did it though in a very upbeat way, so that people could dance to it, and listen to the lyrics, and have fun, and let loose, and let go a little bit.

I really do enjoy your songs. What’s next after the Bitter End?

I’m playing Rockwood, I’m playing a lot of gigs. I’m writing again so I want to record a new record sometime next year, I want to get as much Music out there as I can. I would love to go on a tour, open for someone that I respect and really admire. Honestly one of my biggest dreams, I’ve always thought that my music would place really well in television and movies. That’s a really big goal of mine.

Who are your inspirations, besides your cousin?

One of my biggest influences is Sara Bareilles. I always joke with my boyfriend and tell him I would leave him for her, and I don’t like women that way. I have a girl crush on her, like I want to write song with her so badly. We have a similar energy. She definitely explains my music. Honestly I’m a kid of the ’90s, and ’90s rock has been a huge influence on my writing. I really love that whole era. The Alannis Morissette’s of the world, I’m strong, I’m a strong woman….. I think that something that’s really important to me. People, women especially taking into account what they stand for, and who they are, and then who do not rely on anyone else to make you feel worthy.