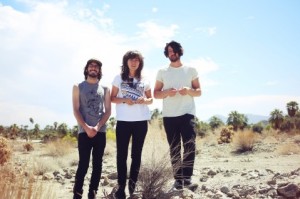 From a debut LP to playing Glastonbury, life is good for Courtney Barnett right now. Simon Proudman catches up with her in hometown Melbourne to have a chat.

“It’s been a bit of a blur, there have been constant new experiences every day.”

Melbourne-based songwriter, record label owner and hobby gardener, Courtney Barnett is reflecting on how her life has changed in the last year. From recording her first EP with friend Brent DeBoer from the Dandy Warhols (another resident of Melbourne) to playing Glastonbury, life has not been boring.

Her storytelling lyrics sung in an almost spoken delivery, have gained her many fans. The last single ‘Avant Gardener’ is probably the only song to document an anaphylactic asthma attack while tending her garden, and contains the memorable line; ‘The paramedic thinks I’m clever cos I play guitar/ I think she’s clever cos she stops people dying’. That song, and the album it came from,’ A sea of split peas’, has sent Courtney on a journey around the world.

It is a wet and cold day in Melbourne, definitely not a day for gardening, when I caught up with Courtney and asked what had been her highlight of the year.

“Glastonbury stands out. Big, exciting and wet. We were totally unprepared for the weather, although we should have guessed. When we got there we luckily found an Amnesty International shop and bought some gumboots for 10 pounds. It was really fun to play and watch the other acts. I saw Blondie, and Money for Rope, I really enjoyed watching them.”

You are more popular in the UK than Australia, why do you think that is?

“Maybe because we have a proper label over there and here we are just me running my own label in my spare time (Milk! Records). I also think everyone is more excited with music from somewhere else. It is just different. I also noticed from my travels that most people also want to live somewhere else, its all part of the same thing, getting away from the familiar.”

Where else would you want to live?

“Ah, well I am actually quite happy living in Melbourne now. But if I had the chance I would like to also live in the bush or even spend time in the countryside in France. Maybe when we sell more records!”

Your album ‘Sea of split peas’ is getting quite old now, what is coming next?

“It has been such a staggered release. My first two eps were individually released, then combined as an album in Australia, and then slowly getting released overseas. It is still selling well but this has been going on for two years and the time is right for my new album. We have just finished recording it, and it should come out early next year, and I am very excited to show and play the new songs.”

What is your favourite track on the new album?

You have played quite a few guest spots on Rockwiz (an SBS TV music show in Australia, see it on youtube) with Billy Bragg and and Dave Faulkner among others. I loved the version of Died Pretty’s ‘Everybody Moves’ that you did, was it a favourite of yours?

“At the time I did not know the song or even the band Died Pretty. I am only 26, so they were not one of the most talked about Australian bands, but when I found out about them, I loved them and then went on a musical rampage discovering The Triffids, The Saints and The Go-Betweens. Dave suggested that song, and I said ‘yeah you’re Dave Faulkner from the Hoodoo Gurus I’ll do anything you want to do’, and then I went onto discover all this great music. We are now working on a Go Betweens cover, ‘Love goes on’ which may appear in our set.”

You have traveled fairly extensively throughout the world in the last twelve months what was your favourite place?

“I never had the money or the time to travel overseas before I started touring. I was working, so it was all new to me. When I was working in Melbourne I got enough to pay the rent and food, and then spent the rest on booze at the weekend, so I never got further than the east coast of Australia. I never thought I would go overseas, but the luck of the last year has changed that.

“It has all been good; it is hard to pick out a single place. The UK was interesting, we were lucky enough to actually drive around, the shows were fun, but the landscape was beautiful and not what I expected.”

What plans do you have of touring back in the UK and Europe?

“We will be playing a few gigs in Europe in November and we will pop into London for the tiniest amount of time, I think just for one gig, but later next year we will tour the whole country again in support of the album.”

All words by Simon Proudman.