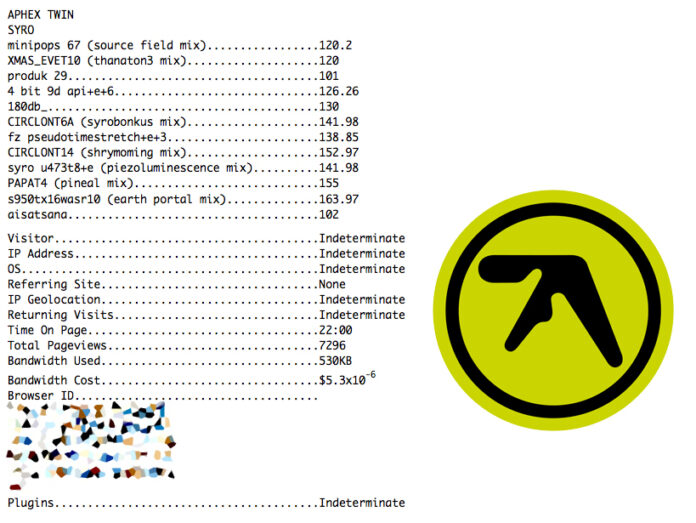 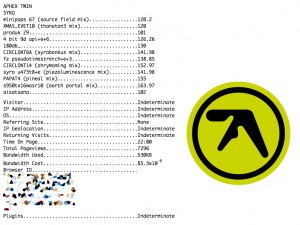 The first press release / print advert for Syro was 533 words of utter gibberish, the result of it’s being flung back and forth through google translate till it made little sense. Apart from, that is, the words “…most celebrated and influential…” in the first sentence. Because Richard D. James, aka Aphex Twin, is exactly that – and not even google translate can argue with such. His new album drops tomorrow and it’s arguably, nay, probably THE most important release of the year so far. Simon Tucker puts its release in context of the current musical climate and RDJ’s back catalogue, then proceeds to review an album that’s everything everyone hoped it’d be – another genius Aphex Twin release.

Thirteen year absence. A lifetime in the art world yet just a brief inhalation of breath when it comes to the Burroughsian world of Aphex Twin. Much has changed yet much remains the same. Ballard’s dystopian vision is still writ large. Our “big” guitar bands have learnt nothing from their predecessors. The same notes spill out over fields, begging us to put our hands in the air and worship at the feet of another Mick and Keef wannabe duo proclaiming their brilliance as the masses lap it up. Of course, some did hear and answer the call, turning away from a lifetime of repeated angst and middle eights to instead forge ahead with more experimental styles and deep warm layers of constructive electronica creating their best works and yes, I’m talking about Yorke and co. in case you were still wondering. It was a call heard and responded to by others whether the signs were obvious or not. Scotland’s (just typing that name fills me with pride right now, but that’s a different story for a different time) Mogwai may not seem on the surface to emulate the canon of work Mr James created but with their off-kilter time signatures, added pulsating electronics and coal-black songs with added ethereal beauty, they had obviously bought into what this one man crimewave was creating.

Thirteen year absence. Is it to olong? Has the ride ended? Would we ever need Mr. Twin again? Of course the musical landscape is a different beast. You know why that is? It’s because we got to sample Mr. James’ personality in the first place. You can talk about your Beatles, or your Beach Boys, or your Sex Pistols, or your Kraftwerk, or your Nirvana, or your Marley, or your….. …..as long as you want (feel free to tune out here and start discussing the merits of these giants) but every time a list is generated by so-called experts and critics (I can hear the glass on my house smashing as we speak. I really shouldn’t throw stones eh Ma) the man they call Aphex Twin HAS TO BE IN THERE. His influence has seeped into our very being and that makes Syro an awkward world to enter. Should James have just released it on the world suddenly like Bowie (and yes, I would put the two English gents in the same bracket) and did we need the hype that has surrounded it’s coming out party? Admittedly the build up wasn’t as hard to stomach as the Boards of Canada release, but it still felt like a long old slog from blimp to turntable. Was it worth it? Is it worth letting the Aphex back into our lives? Some of us have absorbed every piece of music he has created so do we REALLY need another album? Will it detract from our communal adoration or add another high-point for us to pour over? Well to find out, you have to buy a ticket and take the ride.

To put Syro into genre classifications would be futile as it skips bops and lingers over multiple categories. Jungle, Breakbeat, Soul, and Funk are firmly represented here with the album looking to the past to seek out its future. It is a playful and accessible album with none of the drill and bass tendencies that marked out other Aphex Twin releases like the Come To Daddy EP. It seems to marry the more melodic beauty of the Richard D James album with the harder dance style of songs like Hedphelym from Selected Ambient Works 85-92. In fact, Syro is full of subtle flourishes that make it one of James’ easiest albums to penetrate.
The opening salvo of minipops 67 [source field mi] and XMAS_EVET10 [thanaton3 mix] are full of pop hooks and chopped up vocals using hip-hop and breakbeat as their foundation and a smattering of melancholy which gives them Gothic undertones.

Produk29 shifts Syro’s landscape to one of lounge funk rhythms and keyboard rolls whilst 4 bit 9d api+e+6 [126.26] stutters and pings with basslines crunching up tightly sounding like a hound from the deep is calling our name.

All this is good enough, but when we reach the center of the album things get REALLY exciting.
180db_[130] returns us to the warehouse with acid house familiarity and is a tune that is at once exhilarating and also deeply unsettling. It’s a much needed change of pace and it smacks you around the head making you woozy with glee and giddy with delight and as you try to regain your bearings he hits you again with the whip-crack bounce and destructive happiness of CIRCLONT6A [141.98][syrobonkus mix] a song so addictive that it should come with a government health warning. This is the one that DJ’s across the globe will be spinning for decades and it is one that will confuse and invigorate any dancefloor. Its pace lifts and slows and fly’s around your senses making them tingle with chemical likeness. For fellow travelers, CIRCLONT6A is the one that will remind us of those beautiful inner space journeys and communal gatherings when the sun shone all summer and there were no limits to what we could achieve.

fz pseudotimestretch+e+3 [138.85] then talks us down and gives you vital breathing space before you enter the home stretch of our journey. On our way out we are treated to 70’s jazz-funk and classic Jungle with s950tx16wasr10 [163.97][earth portal mix] nodding to classic cuts for the past like Origin Unknown’s seminal Valley of the Shadows.

Syro then lets us go with the stunningly plaintive aisatsana [102] which harks back to previous works like ‘Avril 14th’ from the criminally underrated Drukqs (an album that is surely due a reappraisal)
When the final notes drift off into the ether we find ourselves back here on Earth trying to put the pieces back together from this most enjoyable journey.

Syro is not Aphex Twin’s most innovative work (why should it be?) but it is one of his warmest, sexiest, and inclusive releases making it an essential addition to one of the greatest catalogs of modern music.

It feels so good to have him back and with talks of six or seven albums all ready to go, maybe we won’t have to wait so long for another one. Then again, he may just decide to go back to the Analord series and releasing songs under pseudonyms because, let’s face it, James has always marched to the beat of his own drum and we have happily filed behind and followed him.

Welcome back sir, and welcome everyone to the world of Syro.

Aphex Twin can be found on Facebook and he tweets as @AphexTwin.

All words by Simon Tucker. More words from Simon can be found at his Louder Than War Author Archive. He also tweets as @simontucker1979.