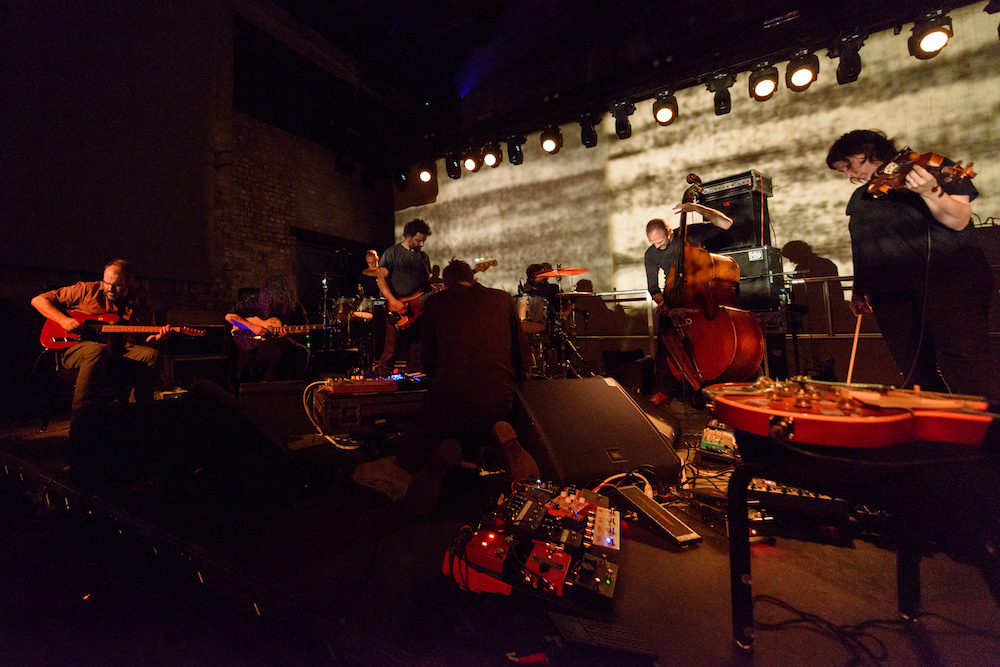 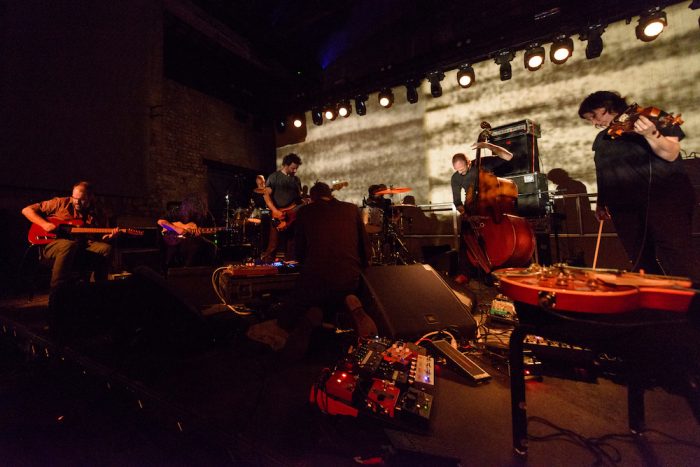 The almighty Godspeed You! Black Emperor are a force to be reckoned with as they tear apart Newcastle with an epic set!

Last time Godspeed You! Black Emperor played in the North East, it came to something of a crushing end with the fire alarms rudely interrupting their gig at the Sage two years ago. This time they’re back in support of their exceptional new album Luciferian Towers, in arguably one of the best new venues around. First up though is KGD, as we enter the venue the thrum of his synths is permeating every inch of the building.

A soaring rabid barrage of noise that doesn’t abate throughout his set, pushed right to the back often obscured by a multitude of flight cases and electronic gadgetry. KGD’s set moving through the gears morphing into this wonderful soundscape at times conjuring an almost meditative state with the constant whirling drones. He creates a relaxing atmosphere, yet we’re full of anticipation. We’re completely expecting that this will not be the case throughout the entire evening, as Godspeed You! Black Emperor foster an urgent and anxious environment.

Whilst it’s a relatively subdued opening of Hope Drone once the band hit their stride they quickly become a force of nature. The thunderous drums lead the way as the plethora of guitars and effects take hold of each track. The rare pauses between these long and supremely atmospheric tracks are met with huge appreciation.

Particularly Anthem For No State, as a sea of nodding heads befalls them all in something of a trance like state, this epic track takes hold of the room. Mesmerised by the incredible visuals and the power of the bands rhythm section, they’re completely captivating with so many slow burning intros you’re on edge waiting for the inevitable explosion of every track.

The venue feels almost purpose built for a show like this, it’s industrial heritage matching perfectly with the stark and bleak visuals that accompany the bands set. Arguably the bands projectionist is another member of the band deserving equal plaudits to any of those who are on stage. The fusion of these two creating a brilliant narrative, as you feel yourself becoming completely immersed in every track there is absolutely no need for words.

There are fleeting glances of the bands more melodic side in the opening to Moya but as with the majority of these tracks that is quick to change as the rolling thunderous drums and bass take hold. It once again turns into an all out aural assault of dueling guitars and wild effects, this constant fight for supremacy reaching an almighty crescendo during BBF3.

It’s a thrilling end to a truly captivating set, they hold the entire crowd in their hand, throughout the endless twists and turns of every track. There is no doubt that Godspeed You! Black Emperor are firing on all cylinders tonight. Even the interruption of the fire alarms once again going off albeit briefly couldn’t knock them off their stride. That even initially looked like a joke but safe to say it wasn’t when the fire brigade were gathered outside of the venue. It added a spot of humour to an otherwise incredibly intense performance.