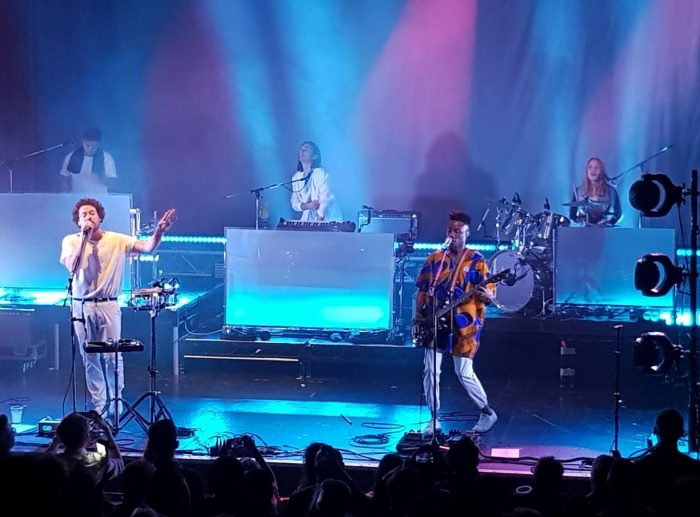 Metronomy enthralled the second city with a set of stone-cold pop classics. Christopher Lloyd went to chant along.

It’s been fifteen months since the release of Summer 08, the latest album by Metronomy. Upon its release, Joe Mount, Metronomy’s guru, stated that the band would be taking a break from the album/tour/album treadmill. However, the last year has seen the band not strictly adhering to that statement by taking the fantastic Summer 08 all over the festivals of the world, whilst along the way slipping in a few conventional tour dates, here and there.

The gig in Birmingham was the second of a run of two such conventional gigs, and the venue was rammed, a visual reflection of just how popular Metronomy are getting, on the back of a run of three solid classic pop albums.

The tone for the evening was set with the opener Back Together, with its mix of angular guitars jarring against fuzzy funk that felt like its heart lay in the 1980s, yet at no point sounding knowingly retro or forced. Upon its euphoric conclusion, the track bled right into Miami Logic and then Old Skool, which saw its manic “Ya Ya Ya Ya” refrain being chanted from the throng so loudly that you could do nothing but cave in and sing along.

The set steamrolled along as the band segued from one track to another, barely giving you enough time to catch your breath and notice just how many brilliant songs the band have actually got under their belts – The Bay, Love Letters, The Look – all of them sounding fresh and played by a band that were clearly enjoying every second. A couple of new songs were included in the set, one of which had a more guitar-heavy, galloping kind of sound in the vein of Corrine, implying, hopefully, that there will be some new material being recorded rather soon.

The main set finished with Reservoir, when the crowd sang along once more to the keyboard refrain, before the encore which saw Joe Mount taking the drums, and the drummer, Anna Prior, coming up front to take the vocals and finish the storming gig with yet another classic, Everything Goes My Way.

As the gig was held in a venue that was to host a Saturday evening club event, it ended at a rather early 10pm, yet Metronomy played a fantastic set which acted perfectly, as a way to either send you out into the night armed and ready to take on whatever club or party you were lucky enough to be hitting next, or to return you home to take in what had been one of the best gigs of the year to date.

Words by Christopher Lloyd, photograph by Emma Barton. You can read more of Christopher’s writing at his Author’s archive.