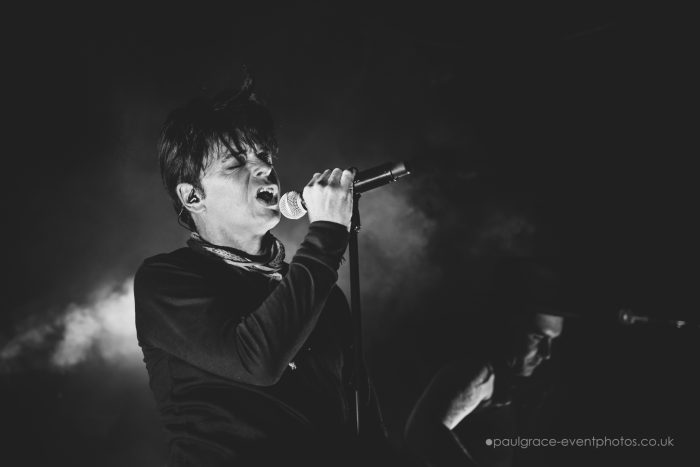 Gary Numan’s new album Savage is set to drop on 15th September and to celebrate its imminent arrival a handful of lucky fans were invited to a boutique launch party in London’s urban-cool club space Electrowerkz.

At 7.15pm sharp the tiny club room fills with dry ice, house lights fade and Numan and backing band hit the stage to a huge welcoming cheer. As this is an album launch we’re treated to a small selection of tracks from the new album as well as a couple of classics. Sounding like the 80’s but on steroids, the new tunes are full of familiar Numan swagger only cranked up to the max with eardrum destroying synth stabs, driving percussion, overdriven guitars and massive choruses. It’s a gargantuan post-apocalyptic thrill-ride of a sound suggesting we’re witnessing some sort of Numan rebirth; he’s on damn fine form tonight, performing with absolute passion and clearly very happy to be back on the road. A proud family man these days, he even brings his daughter on stage to sing backing vocals on final track, My Name Is Ruin.

Ghost Nation
Pray For The Pain You Serve,
Metal
Down In The Park
Mercy
My Name Is Ruin

A short but perfectly formed high octane blast of a show oozing with confidence and I genuinely can’t wait to hear the new album when it lands next month.

You can pre-order Savage here: garynuman.tmstor.es