Multi-instrumentalist, singer, songwriter and producer Alex Siegel has recently released his brand new full length album entitled Roykka, named after the small town in Finland where it was recorded. 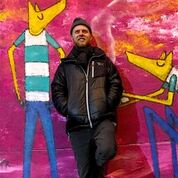 Siegel is based in Santa Monica, California and has performed his indie pop folk songs for audiences in the US, Japan, Taiwan, Thailand, Finland, Ukraine, France, South Africa and Ireland. The amazing story behind the recording of his album is a fascinating ‘by chance’ once in a lifetime coincidence.

The album itself is filled with gentle guitar playing, jazzy undertones, and also shares messages of independence, natural beauty, interdependence and love…

Louder Than War: What motivated the recording of your brand new album?

One thing was that it was actually a surprise for me that I got to make the album. I didn’t set out to do it. I had been working on another project before that, and then I had left to kind of see some space and travel. While I was traveling this individual heard me playing somewhere in Russia actually, in a hostel in Moscow, of all places. He came over, I think I was just sitting there and playing guitar, and asked me what song I was singing. I told him it was a song I just wrote. It turns out he is a producer in Finland. He told me that I had to come to his studio in Finland with him and do some recording. He invited me back to his studio, and I travelled there. We made a song together, and we were both really excited about it. That led to, “let’s record an EP together”. Then we did that. Then it became a whole album together. That’s how it happened.

That is such a ‘meant to be’ story.

I know, it really was. It was really true to the music because the songs were just emerging out of me and the opportunity to record just felt very natural. As I said it was kind of a surprise, it wasn’t like I set out to do it, or that I had to figure out how to do it. The opportunity just came up at the perfect moment.

That is so crazy. First of all you met this person in a hostel in Russia of all places, what were you doing in Russia?

I just got it in my head to go there. I had finished college, and just took my savings, and I wanted to see the sights. Part of my family comes from Russia, a long time ago; I don’t have any relatives there. I felt called to go there. I also went to Ukraine, and I had visited my friend in the Peace Core. I stayed in this little village where the two of us were the only English speakers within 100 mile radius. That’s where I wrote many of the songs that ended up on the album, actually. Just a few months later the conflict broke out and all the Peace Core were evacuated.

That’s a really cool story. Ok, so now you have a surprise album and you’ve played in a lot of countries as well?

Yes, I’ve played in a lot of countries by way of traveling and just playing in a lot of bars, and in people’s homes, gatherings and what not.

That must have been a really cool experience.

It was very cool. It was really cool learning how to connect with people with singing, especially with my background. I play guitar, drums and keyboards, but this was really finding my voice.

Did you study music in college? I mean you’re like a one man band.

No I didn’t. I studied education.

Did you intend to become a music teacher?

I’ve been a guitar teacher and had many students for many years.

Your guitar work is amazing.

Oh thanks. My feeling about college was I ended up studying education, not really because I want to become a teacher, but because I just wanted to understand how the world works. I saw that as a very fundamental to watching our society. I chose not to do music. I was considering going to the USC School of Music for jazz guitar. As it happened I played in bands all through college, and gigged a whole bunch anyway, so it worked out fine.

Do you plan on a US tour to support the album?

At this exact moment I am actually quite busy writing and doing some studio work, but it is a goal of mine. I’ve been on a few tours this year. I did a US tour as a drummer, and then another one to Vancouver and the West Coast. I play drums for a pop band. Another project that I am involved with is doing a lot of writing right now and we are recording an album in the fall. A lot of things are going on that I’m really excited about.