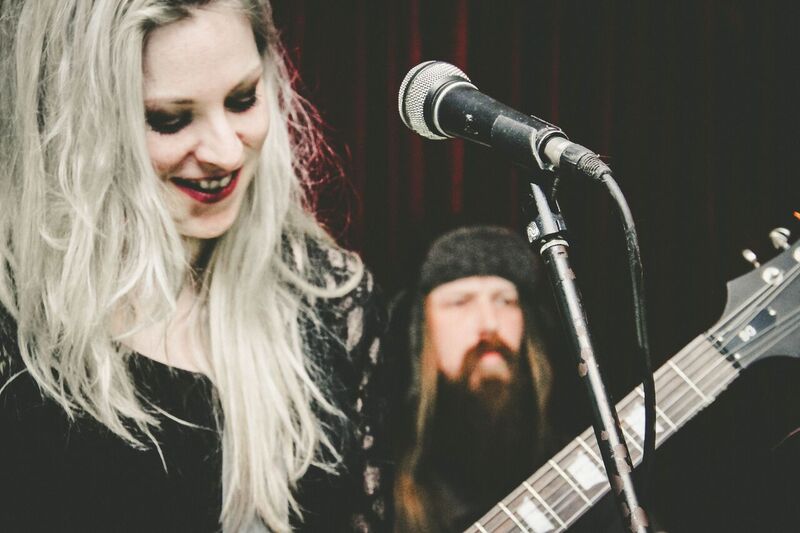 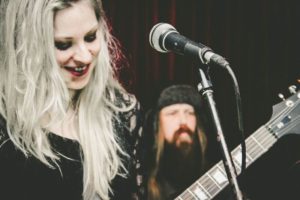 The hometown show and single launch for Dystopian Future Movies on their co-headline tour with Glasgow’s Fvnerals.

Someone really clever to do with music who I really admire (I’d like to think it was Steve  Albini but I really can’t remember) once said that when it comes to song writing and playing  music in general, the spaces between the notes are as important as the notes themselves. This couldn’t be more true with both of the bands I’m here to see tonight.

I think it helps that the sound is stunning. I’ve never seen a show in this place before, but I’ve been repeatedly told that the sound here is something to behold and that the venue sells itself on just how good both the rig and the in-house engineer are. They’re not wrong. It’s loud but it’s crystal clear and for once, the ethereal vocal styles of both these bands do not suffer from wrestling with decapitatingly loud guitars and gunshot volume drums.

Labels like ‘doom’ and ‘slowcore’ are thrown at Fvnerals, but after tonight, I can’t help but  think this is lazy stereotyping – we need something new to pigeonhole the soundscape the Glasgow three-piece conjure almost effortlessly – I dunno, atmo-core?

Whatever. They seem to defy general relativity – time stands still, chords and vocals hang in the air, the next snare strike rings out, taking you by surprise, even though you know it’s coming. It’s captivating, mesmerizing, stark, simple – but it also fills the room and here’s the best bit – that ‘space between stuff’ I  was banging on about – it makes you listen. Like really properly listen. These folk are very clever. While the records are great, this band has to be experienced.

I’m standing here, thinking ‘who does this remind me of that I’ve seen before?’ and when I finally figure it out, even I find it hard to believe. It’s the Melvins. Yes, you heard right.  The Melvins, fronted by a scandinavian sylf-girl with the voice of an entire choir of angels, it really has that kind of chest collapsing power.

The last chord echo-boxes into silence and with a humble ‘thank you’ from singer/keyboard player Tiffany Strom, their set is over. They don’t need to say anything else. They know only too well how much they’ve messed with their audience’s minds.

Dystopian Future Movies finally take to the Persian rug (calling it a stage would be somewhat misleading). The room is heaving and anticipation runs high. Not only is this their first hometown show since last year, DFM are launching their new single tonight. I’m lucky enough to have heard it already, but when they do finally get round to banging it out, I’m no less blown away by it.

Drummer Bill Fisher cut his teeth in heavy metal bands which makes him the perfect powerhouse to drive the engine of this three headed beast. He hits like he’s playing with hammers, but he plays with the grace and fluidity that that is perfectly suited to DFM’s twisty-turny uppy-downy post-rock pantheon. Emily Azadpour’s bass lines are deep, rich and are executed with such effortless style, that I can’t help but feel hopelessly jealous. I’ve played bass for twenty five years and it’s always felt like a wrestling match between style and ability. Front woman Caroline Cawley is sassy and confident but clearly humbled by the turnout for tonight’s show. As the band smash their way through the introduction to ‘Paint It Red’ from their debut EP, the room cheers. ‘We Love you!’ someone shouts from the back. It’s true, we do.

DFM stand on the shoulders of Slint, Sonic Youth and My Bloody Valentine, but they really are forging their own sound from these influences and to label them as just another ‘post-rock’ or ‘nu-gaze’ band is wholly unfair. Yes, there’s chiming melancholy guitar melody rubbing up against ear-smashing power riffs but ultimately, it’s all about the songs – something which many bands in this particular micro-cosm seem happy to ignore.

They save the new single to the very end and it’s well worth the wait. NYD builds to a heart stopping crescendo and then lock-grooves on a final drum fill-chord smash which none of us want to end.

But end it does – beaming from ear to ear, Caroline suddenly takes her guitar off and the whole band is immediately group-hugged by a rug-rushing audience. There’s no doubt from the love in the room and the refusing-to-die applause that this is the beginning of something big.

Dystopian Future Movies single is out now and you find it on their Bandcamp. You can find the band on Facebook and Twitter.

All words by Pete Darrington. You can find Pete on Twitter and his other pieces for Louder Than War here. Listen to him present the best new underground music, including a weekly recommendation from Louder Than War, on his show The Rumble – Tuesdays from 8pm on Radio Andra.