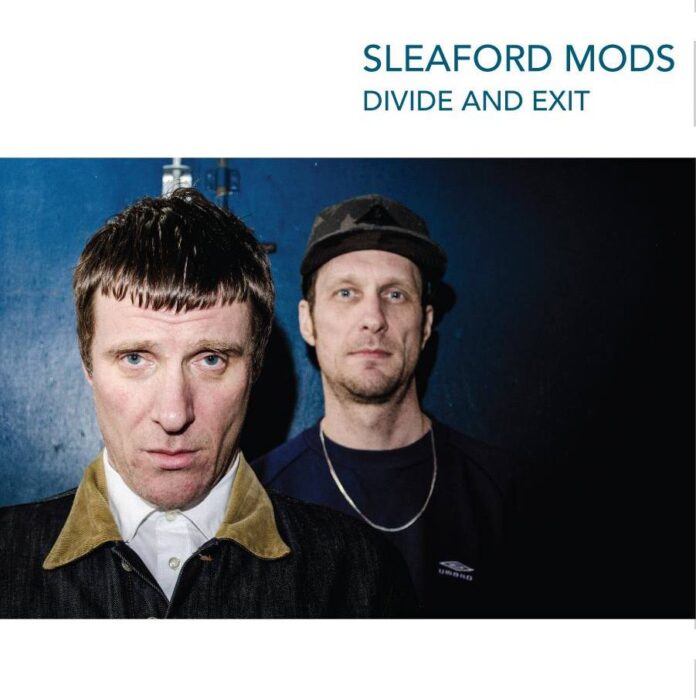 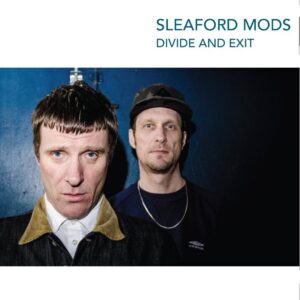 Sleaford Mods – Divide and Exit (self released – see below)

Following quickly on the heels of the raw brilliance of last summers critically acclaimed Austerity Dogs Nottingham’s Sleaford Mods up the ante with a new album, due to be released on the 28th of April and titled – Divide and Exit.

Running with the same frustration, confrontation, street smarts and cockiness as previously Jason Williamson’s pick ‘n’ mix terrace rap and blind poetic fury is as sharp and mean as anything on Austerity Dogs. And that’s not without taking anything away from the impulse and ‘one take’ vibe of tracks like Donkey or Fizzy. Austerity Dogs may’ve put Sleaford Mods on the map, but whether it be song structure, production, writing or Jason Williamsons all-round performance, Divide and Exit is quite possibly their most solid work to date.

Opening with the sinister bass and shuffle of Air Conditioning, Williamson’s vocals are given the loudspeaker effect over a groove which runs right through the album and sounds like a fuller, fatter, more solid production than Austerity Dogs, Divide and Exit kicks like a mule with a sublime mix of styles. Fusing dark garage grooves, gritty backbeats, throbbing punky bass-lines and a host of feral electronic beats and grooves that give off a kind of underground-criminal, anti-establishment vibe, of digital protest music.

The first single from the album, Tied Up In Nottz has already had reviewers buzzing with a round of spirited write-ups enthusing over both content and style. It’s a writer’s dream, but more importantly it’s probably the ideal choice for the albums first single and is just made for the radio (there’s a good chance John Peel would have loved Sleaford Mods) although it’s probably too much for mainstream radio with lines like…

After a few listens though you’ll be mouthing…

…in that now familiar Nottingham drawl and contemptuous pronunciation.

The wicked track A Little Ditty keeps up the pace with a bassline reminiscent of the Batman theme tune, while Williamson sounds like he’s taking shots at the sell-out mentality of mainstream music today:

“Take the money and run, to the elite … you sold yourself to KNOW ONE!”.

But again it’s how he puts it over, it’s his delivery as much as the informed and confrontational lyrics. Jason Williamson without doubt cuts that certain look and presence of the archetypal northern front-man … but it’s his writing and whole performance that’s so unique in attitude, style and so very British. 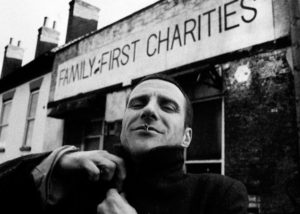 And it goes on with the ever-so cynical Your Brave, Strike Force and a personal favourite Corgi, jungle blitz-in the Monarchy to Andrew Fearn’s wicked backbeat, it’s Sleaford Mods rocking an anti-establishment warehouse party.

With a generous fourteen tracks you’re not even half way through Divide and Exit yet. And it doesn’t relent as From Rags To Richards, Livable Shit, and Under The Plastic And NCT keep the tempo up with a take down of the class system, the workplace, and the internet. Tizwas rings out like an assassination of our capitals own musical importance, fusty, bygone rock-scene and its history with a chorus of…

“…the dinosaurs are stuck on Denmark Street, the boots of Hendrix lick my feet”.

Finishing up with I’ll Keep Out of It, Smithy, Middle Men and Tweet Tweet Tweet … Divide And Exit wraps up with the same charge and contempt it began with … and with not one guitar solo in sight.

Sleaford Mods demand your attention and even if you don’t get it you know you’ve experienced them. Some people actually thought Austerity Dogs was some kinda joke; but then if you bought Kasabian’s last album you’re probably not going to get it anyway. Saying that though many have ‘got it’, including Irvine Welsh, Anton Newcombe and Dean Cavanagh who cites them as his ‘favourite new group’, as well as The Specials bassist Horace Panter who recently described them as “Public Enemy meets Shameless”.

Divide and Exit is nasty as fuck, overloaded with attitude, clever, funny and it screams the truth. This, as well as being musically as far away as you can get from today’s corporate, nostalgic love-in. We need a group like Sleaford Mods more than ever and it’s now, as Williamson and Jason Fearn are beginning to break out of the internet underground and into the masses, that they’ve come up with not only their most complete record yet, but arguably one of the essential British albums of the year.

The albums will be mailed out as soon as we get our percentage from the plant. Please ensure you give us the correct mailing address with your payment.

The CD version will follow a couple of weeks later.

Sleaford Mods – Chubbed Up / singles collection can be found on their Bandcamp.