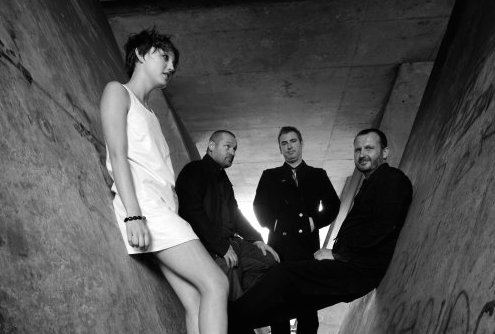 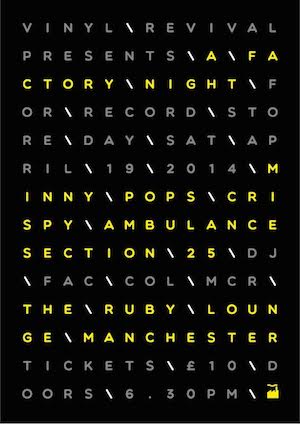 Louder Than War talk to the organisers of an upcoming special live Factory Records event which will be featuring sets by Section 25, Crispy Ambulance & Minny Pops.

Vinyl Revival’s A Factory Night will be turning the clock back for a one-off night featuring three original Factory Records’ groups playing at Manchester’s The Ruby Lounge April 19th.

The event has been brought together by Manchesters most celebrated Factory Records fan and collector Colin Gibbins (more commonly known to his fellow Mancunians and Factory Record fans as ‘Fac Col Manc) and Colin White of renowned record store Vinyl Revival.

Between the two of them they’ve successfully managed to bring three Factory groups together on the same bill for the first time in twenty three years. Colin Gibbins has previously featured in Louder Than War because of his vast and most complete Factory Records collection in Europe (or, more probably, the world). He is as passionate about Manchester’s seminal record label today as he was a teenager buying the records and attending the gigs, and it’s with that same passion and drive together that he, with fellow Factory-fan Colin White, have made this night possible.

So how did this live Factory Records event actually come together?

Colin White: Vinny Cassidy from Section 25 contacted Colin at Vinyl Revival last year regarding playing a small gig to promote a release they had planned for Record Store Day 2014. Colin was still seeking a venue when Alan Hempsall from Crispy Ambulance  also contacted Colin stating they were thinking about playing some dates again, so we now had two Factory bands. I checked dates and realised it was 1991 since 3 bands who had releases on Factory had been on the same bill in Manchester. The hunt was on for a third and numerous names were floating around including Northside, A Certain Ratio, Durutti Column and Stockholm Monsters. Due to various circumstances the chances of having three bands was looking less likely until Alan Hempsall contacted Wally Van Middendorp of Minny Pops. Wally didn’t take much convincing and we finally had three bands.

As with all Factory related events, we needed the right artwork to go with the night. This was the easy part as Trevor Johnson (ex-Factory in-house designer) has worked with both Colins on numerous projects in the past and had designed the artwork for the Factvm exhibition. 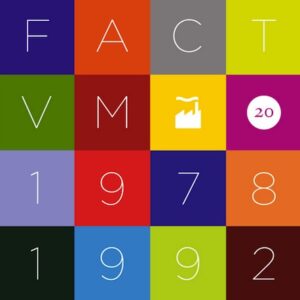 Fac Col Manc: On Record Store Day Colin White from Vinyl revival is promoting and selling a single by a band from the original factory records foundation, a band of the early 80s called Section 25. He felt having a factory night with three bands from that early period would promote it better also.

Where is it all going to take place and when?

How special will the night be in terms of Factory Records?

Colin White: It’s been twenty seven years approximately since three of the original foundation bands have played on the same bill. The bands playing on the Factory night are Crispy Ambulance, Section 25, Minny Pops and Fac Col Manc and Buxstead as DJ’s.

It’s a special night for you too isn’t it Colin?

Fac Col Manc: Yes, on a personal note I was very honored that Colin White approached me to be the DJ for the Factory night last October because of my love of the great Factory label and its bands. As Colin says, who else could supply such a vast collection of music from the great label. 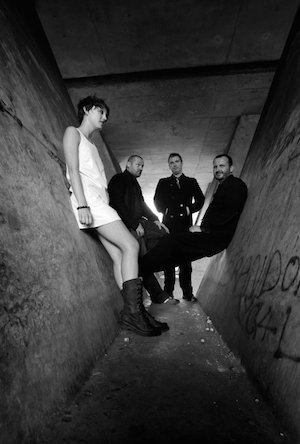 …and of course you’ll be spinning your own records from your vast Factory Records collection, the most complete Factory collection about, are you still finding records today and adding to your collection?

Fac Col Manc: I did complete an item in every format in the official catalog two yrs ago and as far as I’m aware I’m the only person in the world to have done so – and be a Mancunian to boot. All I look out for nowadays are variations which only someone like me would notice straight off, like, for instance, Fac 213, the Happy Mondays Loose Fit cassette which has been issued with two different coloured sleeves, yellow and blue. It’s just something you stumble across in research, but of great interest to a collector such as myself. White labels are a must in 7″ and 12″ LP vinyl also.

Lastly, what’s your own favourite Factory records then Colin, and why?

Fac Col Manc: Originally I’m a Joy Division fan so Transmission is my favourite track of all time but Ceremony by New Order comes in a close second.

Vinyl Revival’s website, where you can buy a ticket for the night, is here: vinylrevivalmcr.com.