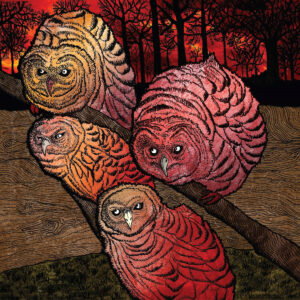 This is no ordinary guitar based instrumental EP, not by any means. Recorded in the Summer of 2016, L’Âtre et l’enfant (The Beast And The Child) is the latest release from the rising Recordiau Prin label, it features classically based acoustic guitar with a hint of the alternative. It’s addictive listening in all respects – the musicianship is fine and seems to follow no predetermined agenda. It flows beautifully, almost like water or birds in flight – fluid and meandering through unpredictable soundscapes.

The side project of Florian Mallet of Mudbath, Edinburgh Of The Seven Seas has produced a fine piece of work. Intimate yet distant, loving yet despising, it transcends the acceptable boundaries of instrumentalism into something well worth anyone’s attention.

There are additions of other guitars, keyboards and the odd reverb here and there in a delicate but pleasing format, and the tracks are far from uneventful as La Bienveillance clearly demonstrates with a simple riff often repeated, is joined by gentle cavalcades of sound before progressing to an almost Spanish flamenco sound.

Imagine ambient or drone guitar work and you may be on the right tracks. Nuit Brune begins with gorgeously pleasing wisps and whirls with a delightful guitar gentle plucking in the distance before a more aggressive tact takes hold. It closes by returning to the gentle calm of night-time silence before the acoustic ripples of L’Eau Sourde take hold.

Bass-lines play as big a part as the main guitar itself, underpinning the main play and gelling everything in place. Closing track, Le Val Impénétrable is uplifting and joyous and soon breezes through almost five minutes. A slowing steam engine passes through the valley in the title making affectionate nods at the beautiful scenery it passes before disappearing and fading into the horizon.

L’Âtre et l’enfant is a surprise. The prospect of neo-classical ambient guitar sounds like a nightmare from the ’70s but it is far from that. Accomplished and expertly played it brings a refreshing sound to the fore. Florian Mallet has created a work of incredible texture and interest here, and the prospect of more work in a similar vein is mouth-watering to say the least.