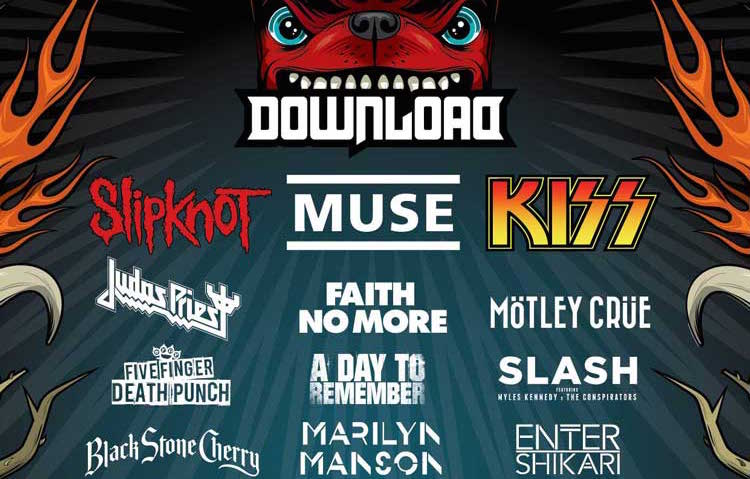 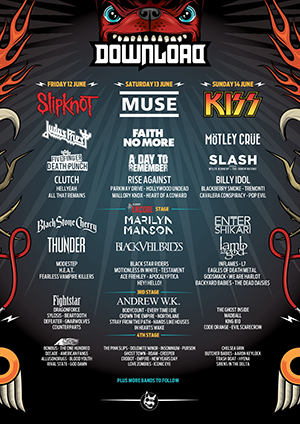 This year’s Download Festival looks set to be the biggest and best to date. For Louder Than War, Alan Ewart explains why.

Download is the UK’s biggest Rock Festival and it returns to Donnington Park in Leicestershire, its home since 2003, between 12th and 14th June. 2015 looks set to be an epic year for the festival that focuses on the rock, metal and punk end of the musical spectrum.

Download has hosted the biggest names in rock over the years and this year it looks like the line-up may just be the best in the festival’s history. Bands already confirmed read like a veritable who’s who of rock royalty. Many of the main stage headliners have already been announced with Des Moines masked crusaders Slipknot and UK veterans Judas Priest heading up Friday’s line-up.

Saturday sees the Devon based rockers Muse supported by San Francisco’s Faith No More, whilst Sunday has my personal favourite main stage line-up with the inimitable Kiss, supported by Motley Crue and Slash.

As is invariably the case at major festivals the main stage headliners are only a very small part of the story. If you are going to Download this year be sure to take an open mind. Get away from the main stage, feel the vibe, discover new bands and check out some of the other entertainment on show.

This year’s Download is also the home of some of the most varied, exhilarating, weird, wonderful and outrageous on site entertainment in the festival world. Nothing says weird and wacky like punk rock pro-wrestling and this year for the first time the Download line-up includes the country’s finest independent wrestlers, the mighty PROGRESS Wrestling.

Other new on-site features include the Dog’s Bed Stage – the fully equipped open mic experience that allows YOU to follow in the footsteps of rock’s pantheon by performing at Donnington, a Pop-Up Art Gallery, LASER TAG, the Hair of the Dog beer and real ale house, circus skills and speed dating hosted by Heavy Metal Dating.  Who knows if the speed dating works out you could even get married (unofficial) at Downloads inflatable pop up church, the Chapel of Love.  Be sure to bring your Air Guitar to Download so that you can blow away the competition at the Air Guitar championship.

Away from the main stage this year I want to catch Enter Shikari, Gnarwolves, Black Stone Cherry and Marilyn Manson. Enter Shikari and Gnarwolves both played Reading and Leeds last year, I only managed to catch part of their sets, something I hope to put right at Download.

Punk poet and Philosopher, the hard partying Andrew W.K. looks like a good call and L.A. grunge band L7 are playing their first UK set for 15 years, they are a must see.

Swedish metal giants In Flames will also return to Download in 2015; the infernal five-piece spent much of 2014 in the recording studio but are set to roar back on to the UK live scene to set Europe’s biggest rock and metal festival alight this summer. They will be joined by seminal thrash heavyweights Testament seven years on from their only previous Download performance.

Following his surprise departure from Asking Alexandria, Danny Worsnop’s new project, We Are Harlot – whose music draws on the awesome tradition of its 1980s classic rock forebears – are also bound for Download 2015.

Black Star Riders, will share material from their hugely anticipated new album, The Killer Instinct, with the Download faithful for the first time.

British rockers Thunder are also confirmed ahead of the release of their first record in six years, Wonder Days, which is due for release in February. They will be joined by local cult heroes, Nottingham metallers Evil Scarecrow, will be scuttling South West along the A52 to unleash the mighty Crabulon on unsuspecting legions of festival goers.

Swedish metal-heads Bombus will also fly into Donington for the first time armed to the teeth with their uncompromising breed of barnstorming, balls-out heavy metal, alt-power-rockers Hands Like Houses add to the booming Australian delegation, while cult hardcore punks Stray from the Path also hit Download for the first time, as do hotly tipped punk rock tyros, Creeper and the new project form the post-hardcore marauders formerly known as Climate, Blood Youth.

Download regulars will be well aware of the festivals Rest In Peace (R.I.P) packages and if this more luxurious camping experience floats your boat you might also be interested in a Seat of Luxury pass offering access to the cleanest, most refreshing high-tech festival toilet experience in the history of music festival toilets.

With so much to see and do this year’s Download festival promises to be the best ever, check in, chill out and have a blast.

Words by Alan Ewart  You can follow Alan on Twitter at @soundofmysummer. Read other articles by Alan here.