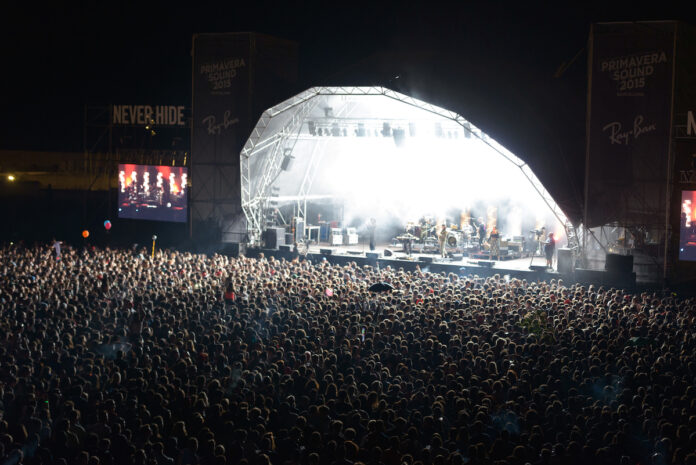 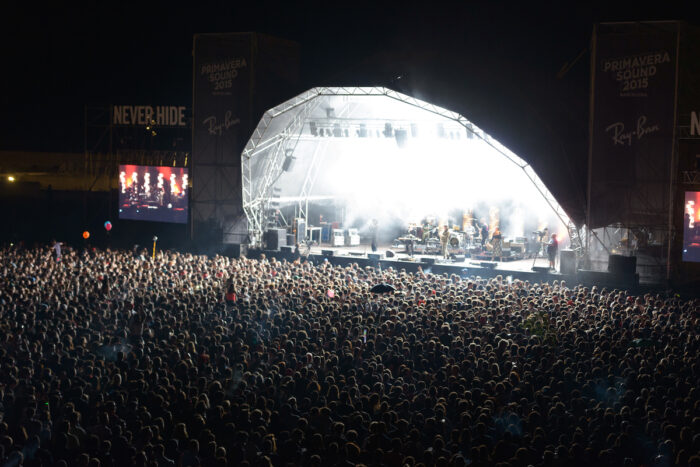 As the festival opens properly, the acts come thick and fast, a line up filled with insane quality and unrivalled variety makes the opening day an eclectic success of epic proportions.

This evening is the first of three days of ticketed events, and the line-up is completely bonkers, every corner you turn is a new experience. Arriving early we secure our Panda Bear tickets but fail to secure tickets to see Battles at The Hidden Stage. To cure our dismay we head over to the rather grandiose Auditori Rock Delux where Peter Gordon is conducting an all-star cast.

These pieces of music were originally written by the legendary and sorely missed Arthur Russell. They’re are now being brought back to life by an ever changing band which tonight features the incredible Nik Void of Factory Floor and there’s even a guest appearance from Charlatans front man Tim Burgess. The avant-garde disco pieces really strike a chord with me; the mildly psychedelic visuals helping to bring the music to life in this monstrous hall. 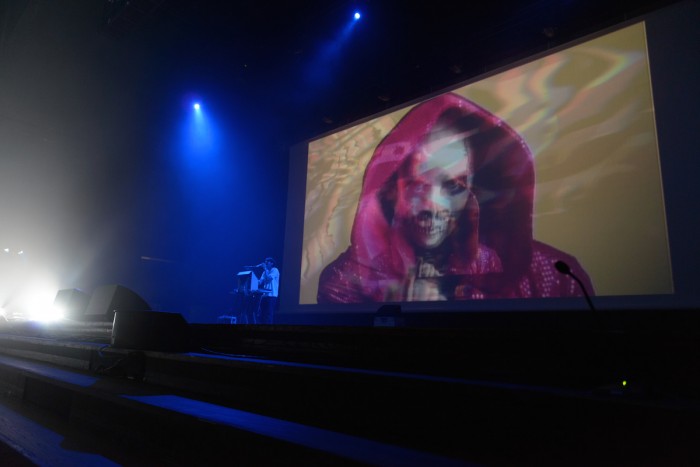 Straight after though we’re thrust back in to another queue, this time for the incomparable Panda Bear, who brings new LP Panda Bear Meets The Grim Reaper and one man show to the same Auditori. The huge stage plays host to a single small electronic set-up, its contents unknown, but as the lights dim and Noah Lennox appears behind said set-up, his wild visuals kick in. What originally looks likely to dwarf Panda Bear quickly turns in to an audiovisual feast for the eyes and ears.

The imagery is wild, psychedelic and definitely warped, the clashing sounds have you pinned to your seats as Noah rockets through his latest offering and delves in to the past. With the tracks all moulding together and with little let up for us to catch our breath, it’s an incredible sight and a definite early highlight for me, even though there’s so much more to come.

Following Panda Bear we venture into the Parc Del Forum and make a beeline toward the Pitchfork stage where on form Aussie upstarts The Twerps are making waves. Their laid back stylings are reminiscent of so many in this genre, and as such they’re perhaps not the most innovative band on offer, but they play a well put together set and seem to have ingratiated themselves well with the swarming festival crowd. It is a wholly pleasant experience but it’s a sound we hear all to often at the moment.

Next up though on the same stage is an altogether different prospect in the form of Viet Cong. Loud and brash, these Canadians unleash a barrage of their own style of post-rock on this unsuspecting crowd. One of the bands that were at the top of my list for today, they really don’t disappoint; tight, loud and sound simply incredible. As they finish up though, we’re faced with a rather long walk over to one of the main stages. 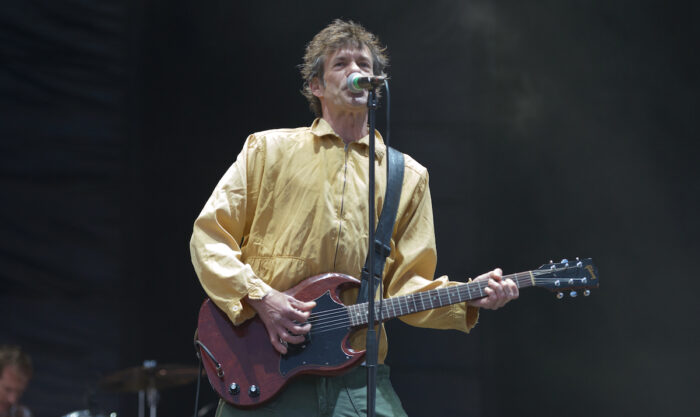 As The Replacements take to the stage everything seems to shift up a gear, as The Trashmen’s Surfing Bird blasts out across this vast space, everyone’s excitement levels peek. A rousing rendition of Takin’ A Ride kicks off proceedings, and with this mammoth crowd going suitably wild, it’s hard not to be overwhelmed by the power of this set. The Replacements play with impressive ease, they’re in impeccable form, with tracks like Tommy Gets His Tonsils Out and Waitress In The Sky included, it’s an absolute masterclass. The only issue for me is having to leave part way through the set, but such is the nature of festivals like this, there will always be heart-breaking decisions.

Mikal Cronin has long been a favourite of mine and the opportunity to right the wrong of never seeing him live is too great a pull. Riding on a wave of acclaim, Cronin arrives at Parc Del Forum on a complete high as he opens proceedings with Turn Around from his new LP; the crowd fawn over him singing every word.

Impressing us with some of his older output, tracks such as Get Along and See It My Way are all huge hits with the crowd. However, it does immediately strike me as to how effortless all of this is to Mikal, and his set is the undoubtedly highlight of Thursday for me.  Cronin is someone who I’ve waited so long to see and he proved to be worth every bit of that wait.

With a rare small amount of time to kill, we keep the party going with American indie-rockers Brand New, who have just taken to the Adidas Originals stage. Despite this being one of the smaller stages the crowd is spilling over toward the next stage as they scream back every word. The band are in incredible form and rip through tracks at pace. 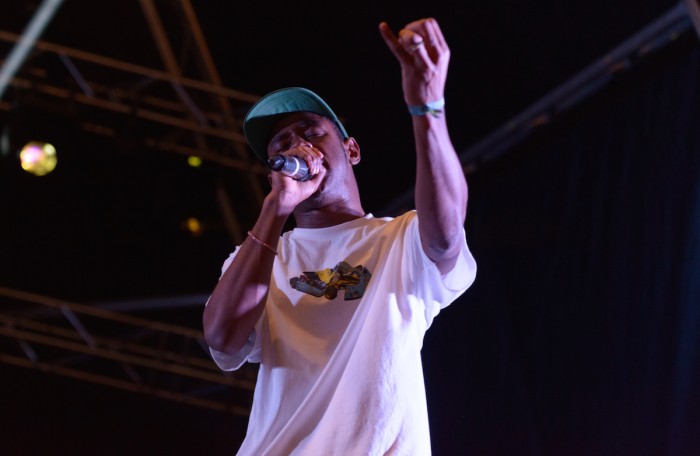 Yet this is all just a precursor to what is about to happen on the nearby Pitchfork stage, as once again a large crowd amasses, and Tyler The Creator takes to the stage, bouncing in his typically jovial fashion, and as everyone screams his name he quickly changes on stage in to something a little more comfortable before setting about the crowd.

His set has to be the most fun you can have at this festival, a man absolutely full of beans tearing from one side of the stage to the other. Spitting his rhymes about various odd subjects, he brings light to what has otherwise been a fairly serious day at the Parc Del Forum. This does seem to be the start of things to come though.

As we move on to the Ray-Ban stage where Australian Chet Faker is about to entertain the crowd; his set opening with him hunched over a variety of electronics as he creates an incredible soundscape. As his band join him though he flips back to crooning over this packed crowd, his beautiful voice emanating throughout this natural bowl. The highlight of his set still comes in the form of a cover of No Diggity, which sounds absolutely incredible. That said his own tracks equal it but there’s something about the delicacy and sweetness of that cover that just really sets alight the night. 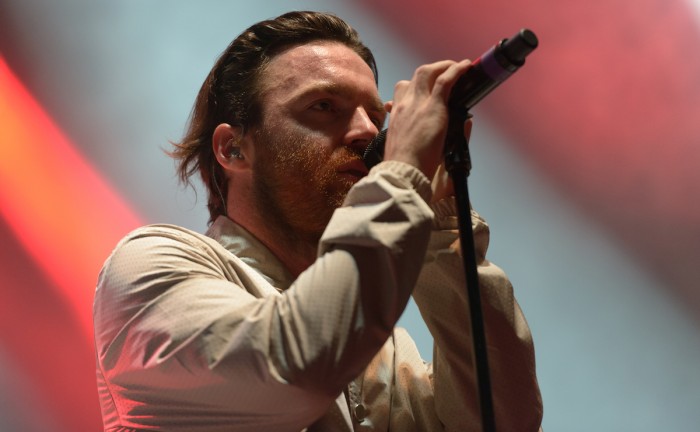 As the night really begins to take hold, there are two concurrent themes, one of excitement and happiness from the more upbeat acts and the doom and the drone of the darkness-loving contingent of the line-up. One such band being the incomparable Sunn O))), from personal experience the frequencies required to experience such acts though often require the venue to be indoors, yet tonight even being some 50 metres from the stage Sunn O))) sound absolutely incredible, and though the weather has been nothing short of beautiful, when they take to the stage you could easily be forgiven for thinking you were in a beautifully orchestrated thunderstorm.It’s a true show of power and prowess from these drone masters, providing yet another highlight from a day that has been incredibly eclectic, though it’s not ended yet.

Despite tired limbs, blistered feet and serious cases of fatigue, we soldier on with renewed vigour to catch one of the UK’s breakout successes of the last couple of years – Jungle. Jungle have had a whirlwind rise to notoriety and rightly so, with exciting tracks and an exceptional live show and tonight is no different. It’s just before 2:00am and the band burst on to stage filled with vigour, the energy emanating from the stage giving us the lift that we need.

There are obvious highlights in the set including Busy Earnin’ and Julia, but these somewhat supplementary to the whole experience. The whole set-up and the atmosphere that the band creates really does lift spirits it’s a perfect end to the first day. A day filled with wild eclecticism, provided by a cast of the most innovative, astonishing and awe-inspiring bands and artists that the world has to offer.

However, Friday at Primavera is sure to top even this with what can only be described as a jam packed line up featuring the likes of Sleater Kinney, Ex Hex, The Julie Ruin, Belle & Sebastian, Jon Hopkins, Death From Above 1979 and Run The Jewels to name just a few.

Panda Bear can be found online here pbvsgr.com. He is also on Facebook and tweet as @pandabear.

The Twerps can be found online here mergerecords.com/twerps. He is also on Facebook and tweet as @twerpstwerps.

Mikal Cronin can be found online here mikalcronin.com. He is also on Facebook and tweet as @MikalCronin.

Tyler The Creator can be found online here oddfuture.com. He is also on Facebook and tweet as @fucktyler.

Chet Faker can be found online here chetfaker.com. He is also on Facebook and tweet as @Chet_Faker.