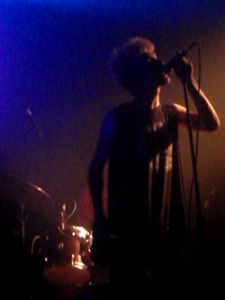 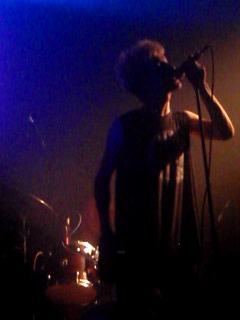 Doldrums – an electronic mess of a band – play to a lucky few and are just begging for that big, sweaty breakthrough.

In my little world that has many little rooms with many little bands and the odd big bass drum, I’m currently struggling to see what exists outside my little MP3 player and diminishing eyesight and hearing. We all have favourite different bands now that none of us can be bothered arguing about and we all have different categories when it comes to favourite bands meaning we can have more than one at any given moment. We all trust each others recommendations and we all hang out, tap feet say “cor !” and want to shout loud about what we see.

It’s imagined that when we force open the doors to a venue hosting Doldrums that we’ll have to squeeze ourselves in with one arm still inside our jacket sleeves tutting very loudly at the four deep queue at the bar and prepare to wave our arms in the air as we struggle for breath and find a bit of floor for our feet to stand on.

Doldrums have two fab albums out that both contain the odd inappropriate bleep and glitch that could be deemed mistakes kept in and that experience sets us up nicely for an hour of entertainment even though we realise that it’s nearly three years since we caught them in East London’s Shacklewell Arms and the progress of this band in the capital still hasn’t transformed them into the big sweaty ravey whistleblowing clubs that would probably make London a better place than we think it actually is.

So we, the ones with the two albums on the desk back home that we refer to when visitors arrive as exhibits one and two are left standing here on a Wednesday evening mate-less and excited at the prospect of hearing the tunes (hopefully) from the debut and (definitely) from the recent SUB POP released “The Air Conditioned Nightmare”.

Some of us are hopping around with our arms in the air standing alongside the headscratching people who appear a little bewildered by what they’re seeing and hearing whilst not realising that for the few individuals here THIS is what our favourite band sound like and for an hour, some of us will lap this up and not care about the surroundings that lack the stray feet treading on our toes and elbows spilling our drinks.

Certainly a lot of this appears to all be made up as they go along tonight however those of us who have done our homework have got what we expected even if the uninitiated may have left none the wiser about what they’ve just witnessed.

A tight drummer that spends 75% of the time on the high hat and bass drum, a button twiddler and Airick Woodhead the man in charge, also pressing the start/stop, and singing out heavy echoed vocals and displaying sign language during the odd tune to indicate as to when these tunes should be stopping and restarting again (if necessary) – it’s a well disciplined performance (no songs appear to last more than four minutes) that seems to omit the debut album. 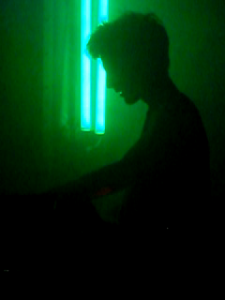 To be critical, it does feel like a band getting to grips with the start of a long tour on a quiet night but in reality it’s still (live) work in progress that’ll blow our socks off once set in a setting that the dance people of the world will rejoice in. A fucked up dance band full of original quality noisy messy tunes and an important band in the ears of some of us still dreaming of a dark tent at 3am and a tin of disco biscuits waiting to be opened.

Maybe our dreams will come true one day. Maybe we’re still a bit early for the party. Maybe we’re getting it all wrong (again). However, to have a party, a great party, someone somewhere has to start one off first and have the first dance.

Consider that’s us – standing on the cold concrete three feet lower than the three Canadians up on stage. Imagine we’re early arrivals and be aware that the door remains unlocked for you to come in and join us, go bananas and engross yourself in this electronic mess of a band whenever you feel fit.

Who else wants to come in? There’s still a bit of room for a few more of you out there?

DOLDRUMS – for one hour tonight no one else comes close to being our favorite band.

All words by Keith Goldhanger, find his Louder Than War archive here.