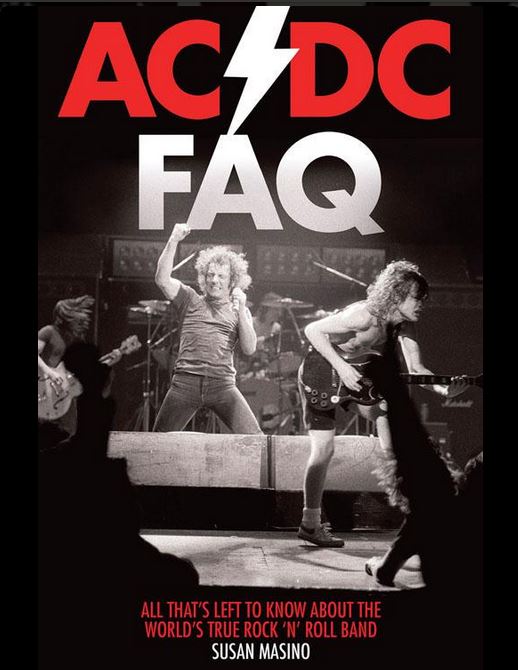 The FAQ series delves into the world of AC/DC at a time when the band  boast a new album in ‘Rock Or Bust’  and are back on the road celebrating their 40th anniversary,  which may very well be their last hurrah.

The qualifications of Susan Masino to pen this particular FAQ can’t be in question. Her personal involvement with the band goes back to 1977 and many chapters draw on  her personal experiences and interviews with them. It also fits in neatly with the general theme of the FAQ series. It doesn’t attempt to be a career spanning and in depth biography, its 37 chapters cover the history of the band – from its formation and early days right up to the present with the new album, the debilitating illness of Malcolm Young and their decision to out on first tour without him.

There’s a nice little foreword from Chad Smith of the Red Hot Chilli Peppers which kicks off what is a collection of sometimes short and throwaway sections and some more in depth and historically interesting parts. It’s well balanced in terms of not omitting or glossing over any of the first decade –  the Bon Scott years – although it has to be said that in the grand scheme of things, three quarters of the band’s career have been with Brian Johnson as frontman. However, those formative years were the ones which were so significant in terms of cementing the base on which the band’s reputation and no compromise attitude was set solid.

A couple of the more noteworthy sections include interviews with the band, something which given their reputation for privacy and keeping things close to their chests, offers up something of note.   The Black Ice tour which ran from 2008-2010, turning out to be not quite  the one which broke all records, but close to record breaking in terms of being the second highest grossing tour in history, is supplemented by an interview with Angus Young in positively effusive form – the answers sometimes stretching to five and six lines of text.  In total contrast is the interview conducted on the second leg of their first American tour by Masino; about twenty pages of sometimes meaningless and rambling one line bantering between interviewer and interviewees. Also passing the weight test is a lengthy 70 pages  devoted to the bands wealth of recorded material and a further  healthy section on the various and increasingly vast and lengthy tours, albeit with the seven year break after the ‘Stiff Upper Lip’ period.

Some of the shorter snapshots however, are just as rewarding. For anyone who’s ever wondered why, after forty years in the business, Angus always plays the Gibson SG, the answer is here. There are a number too, of road stories and tales of Bon Scott’s various antics which to be honest seem pretty tame compared with the type of sensationalised rock and roll debauchery which  sells volumes. Some brownie point for steering clear of the more obvious gratuitous selling points, unless you simply want to know  why you shouldn’t pick a fight with Malcolm Young.

Given the portrayal of AC/DC as a fiercely and closely knit group in Mick Wall’s thorough 2012 ‘Hell Ain’t A Bad Place To Be’ biography (strangely omitted from the select bibliography) what Susan Masino has to offer is the view from someone who’s been incorporated into the band’s inner sanctum, all eminently readable and accessible. Like the band, a no nonsense and plain speaking volume and decent addition to the FAQ series.