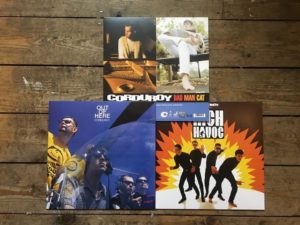 For some people in the 90’s Corduroy were abit like Marmite. You either loved them or the bands taste was a little too strong for some indie kids. Personally I couldn’t get enough of them and lapped up any release I could get my hands on and so it would appear a whole new wave of fans will be able to experience the Corduroy experience with this mass re-release.

There is nothing new amongst these releases, but who gives a monkeys when these albums rank as some of the best albums to ever be originally released by Eddie Piller’s famed Acid Jazz records. Dad Man Cat takes a stab at 1960’s Michael Caine, Alfie and Blow Up with its revved up organ groves, silky bass smooth lines, fast moving guitar riffs and drums that sound, at times, to being played at 10000mph. Forget your Aston Martin, this band are in a Jaguar all of their own making, and so the band were at the time, there weren’t many band quite like them at the time, yes James Taylor Quartet were breathing the same instrumental air, but not quite the same funked up Acid Jazz laced air. With classic tracks Chowdown, Ponytail, Harry Palmer and Quincy Jones cover Money Is, the impact upon the educated listener will leave you in a tizz ready for round 2. High Havoc.

The bands 2nd album saw the band, High Havoc, mix in a number of vocal efforts along with the Corduroy steadfast instrumentals. Single London England became a dancefloor classic in the 90’s, which I’m sure would have influenced Albarn, Coxon, Rowntree and James to ask the fabric four to support Blur at their ground breaking Alexandra Palace concert in 1994. There are further imaginary soundtrack masterpieces here, The Frigheners, Very Yeah plus the closing track Clearing Up Music pre dates Shack ‘n’ Vac, which would categorically help you put the freshness back into your musical collection.

The 3rd and final album in this reissue series, Out Of Here, features mostly full vocal songs, brothers Addison leading the way here with their Stevie Wonder/Manfred Mann type duel vocals. Single Mini is a bonafied cult classic tune, phased keyboards, hugely catchy chorus, the band riding high on a poptastic wave, the band at the time were photographed with Barbara Windsor alongside a classic Mini to publicise the single, I’ll carry on. Fellow single Motorhead didn’t see the band go all leathers, piercings, tattoos, screaming into the microphone, rather the band took the Motorhead tune and dissected it into a chugging motorised Acid Jazz rip roaring tune. Further favourites on the album are Don’t Wait for Monday, January Woman and The Dicemen.

All are released through Acid Jazz on November 02 2018. You can pre order the albums via this link. Corduroy can be followed via their Facebook, Twitter and Instagram pages.