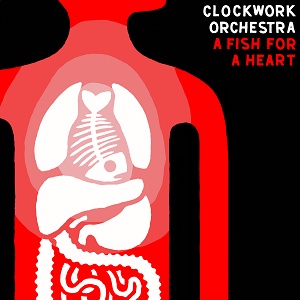 That difficult second album? It would appear not. Dubliner, Paul Mangan (aka Clockwork Orchestra) has obviously never heard the phrase as he breezes through twelve absolutely bonkers tunes wearing his proverbial ‘madcap’.

Reversing itself into the parking bay between Devo and They Might Be Giants and using the elaborate and often complicated arrangement styles of Sparks, Mangan has created an album that is instantly lovable and likable. If you’re one of those anti-synth people who won’t even listen to the genre because ‘it’s all pre-programmed’ then you can stop reading now, if you like fast paced original three minute epics then Clockwork Orchestra is your thing!

The Generator Girls opens the chaotic proceedings with a marvellous high-speed song which will endear you instantly. It’s poppy with the same post-punk attitude that the Mael brothers brought us and echoes all those slightly whacky 80s artists like Landscape and Trio with a modern twist using vintage keyboards. Sounds intriguing? It is.

Does Puddle Fishing borrow a violin riff from Jem’s 2004 album Finally Woken album? Possibly. But, in the same way that Thoughtful Eyes has a vocal arrangement not dissimilar to Ultravox’ All Stood Still, Paul makes it sound his own.

There are also great guitar riffs and piano interludes which are mingled with a slightly Stateside accent which is occasionally treated to sound like a voice underwater. It’s a brave album, brave because it’s like nothing else around at the moment and Mangan has to be applauded for doing something so completely off the beaten track that it becomes a completely new breed.

Lyrically, it’s often daft and that is where a lot of the charm of A Fish For A Heart emanates. Clean Clothes Dirty Girl packs more effects and sounds into it than Imelda Marcos hoarded shoes in her walk-in wardrobe and The Man With The Golden Nose, well, do I really need to elaborate?

Maybe sounding like a gimmick album that wears away after one listen it is far from that and is infectious and thoroughly magical. The Beginning Could Be The End brings back the piscean voice before once more exploding into complete organised chaos referencing Daddy Long Legs and sitting at the top of the stairs.

Paul Mangan may well have a screw loose, but to be honest, it should never be tightened up. A Fish For A Heart is a delightful trip, often reminiscent, but always entertaining. Remember the first time you heard Whip It and it stayed with you to this very day? I rest my case.