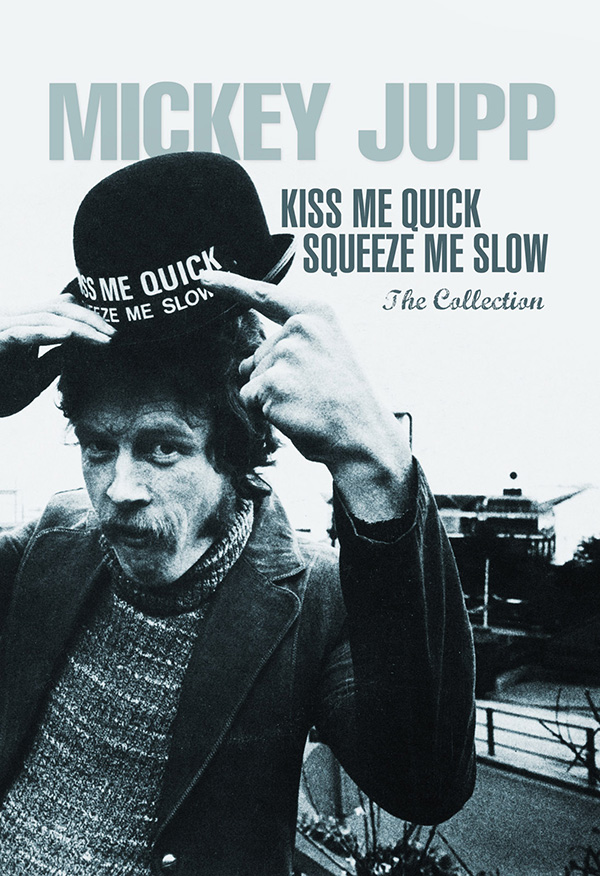 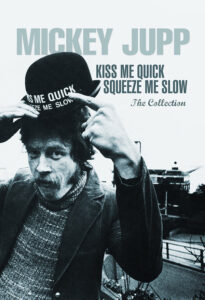 Mickey Jupp : Kiss Me Quick Squeeze Me Slow The Collection

Probably one of the most unjustly forgotten figures of the 70’s pub-rock movement, Mickey Jupp has seen his back catalog lovingly reissued by the good folks at Repertoire Records. Starting with the 3 albums by Legend the reissues run ended with his 1980 album Oxford. Following the release of a Live Album recorded in 1979 for the Rockpalast TV show in Germany, a box set compiling some of his best songs was announced. After numerous delays due to  track listing and licensing issues, the finished article titled : Kiss Me Quick, Squeeze Me Slow is available. It’s a neat little box that comes in a cardboard casing.  It contains 3 CD’s,1 DVD and a booklet with photographs and an excellent essay by Will Birch. The compilation covers the whole of Jupp’s career in non-chronological order.

The first CD contains a fare share of tracks from Jupp’s two most well known solo albums : Juppanese and Long Distance Romancer. Juppanese was Jupp sole album for Stiff Records and was recorded with two different group of musicians and different producers. The recording started with Gary Brooker from Procol Harum at the helm but Dave Robinson from Stiff didn’t like the sound of the tacks so the recordings were scrapped and another session with Nick Lowe producing started. Ultimately Jupp didn’t have enough songs to do a whole album with Rockpile so he made peace with Brooker and the record features songs by both producers. It remains Jupp’s strongest album and features some of his most famous tracks (Short List, You’ll Never Get Me Up In One Of These, Old Rock’n’Roller). The follow up, Long Distance Romancer was produced by Kevin Godley and Lol Creme (of 10cc fame) and saw them lending their harmonies to Jupp’s songs, the result is surprisingly good if maybe a little to slick in places. The version of the songs that feature on several bootleg live recording show that they could have benefited from a simpler production (Chevrolet, Switchboard Susan). Other highlights from the first CD are Cheque Book, a song from Legend’s Red Boot album that Jupp often used over the years to open his gigs, Taxi Driver (probably the best Chuck Berry song he didn’t write) and two version of Down At The Doctors (a song made famous by Dr Feelgood)

The second cd features quite a heavy chunk of Jupp’s 1980 Oxford LP (Blues On Their Own, Oxford Dick And The Words, Poison Girls, Monty Bronte And The Sisters). A hard rocking version of Switchboard Susan taken from a German single is a notable improvement on the version present on Long Distance Romancer and Lorraine Pt 2 from Legend’s Red Boot Album boasts one of Jupp’s finest vocal performances. Jupp’s later day efforts are represented with Standing At The Crossroads Again that was released on 1991’s As The Yeahs Go By album, an excellent LP that could have benefited from more than one track on the collection. That track is followed by Mordern Music the A-side of the 1982 single that featured Taxi Driver. The third cd opens with 3 songs from Legend’s first LP, first released in 1969, the record features no electric instruments and is like no other in Jupp’s discography. The triplet of National Gas, Wouldn’t You and Heather On The Hill show that he was already an accomplished vocalist and a versatility in his songwriting that wouldn’t be displayed as much on Legend’s other two releases. The fantastic single Life is included, a song that was quite a hit in Italy at the time of its release. Shampoo Haircut and Shave Jupp’s last album before his temporary retirement in the mid eighties is featured with Stormy Sunday Lunchtime and Reading Glasses. The two song from 1988’s X suffer a bit from a slightly dated production but Anything You Say from 1994’s You Say Rock is vintage Jupp (I wish the excellent Fortunate Few had been included too). The DVD features an excellent but all too short documentary called Long Distance Romancer first aired on ITV Anglia. Featuring interviews with Jupp at his home in the lake district interspersed with footage from a gig at the Dr Feelgood bar in Southend-on-Sea. It’s a must see for any Jupp fans and features some really interesting insight on how Mickey writes his songs.