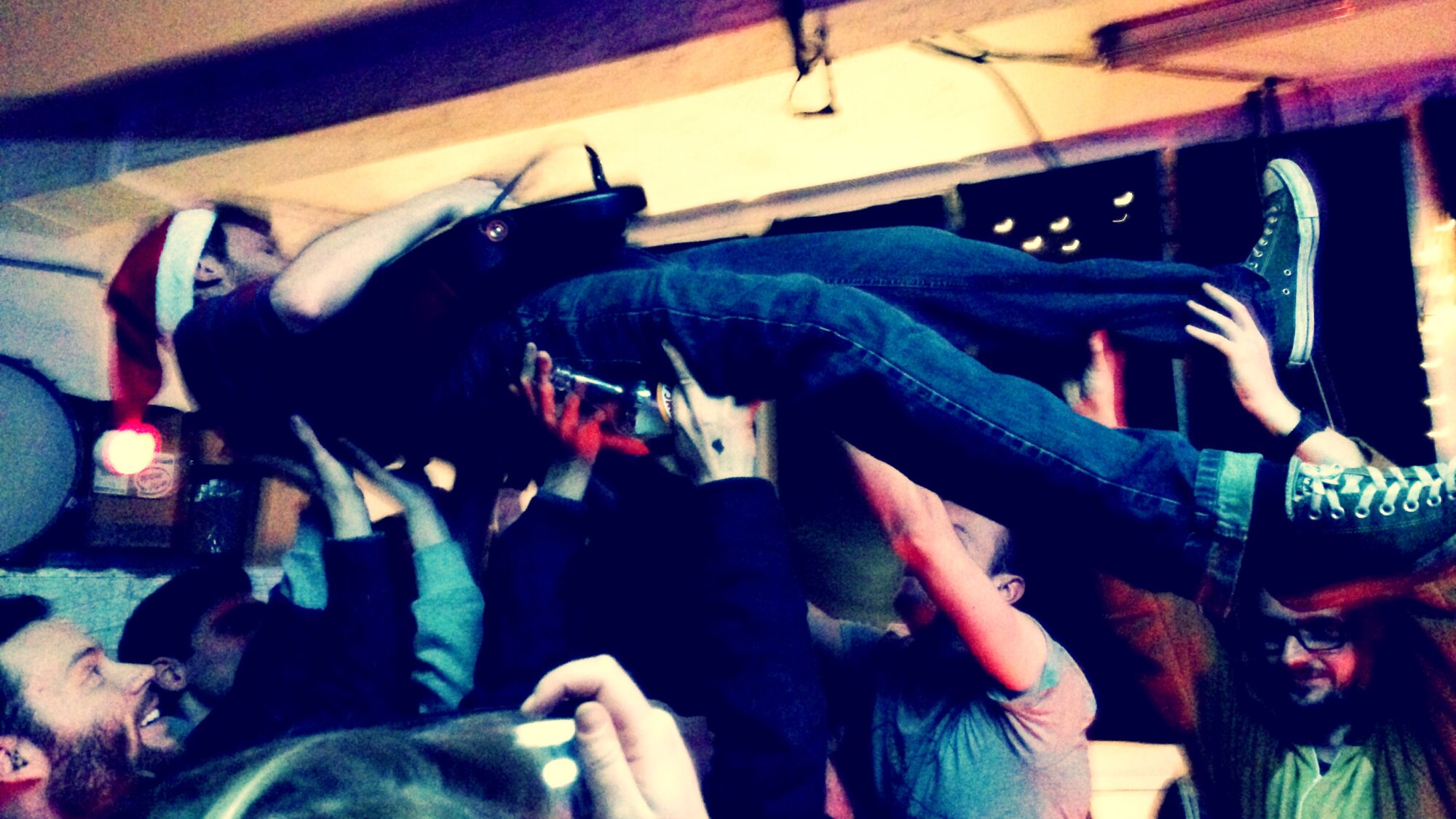 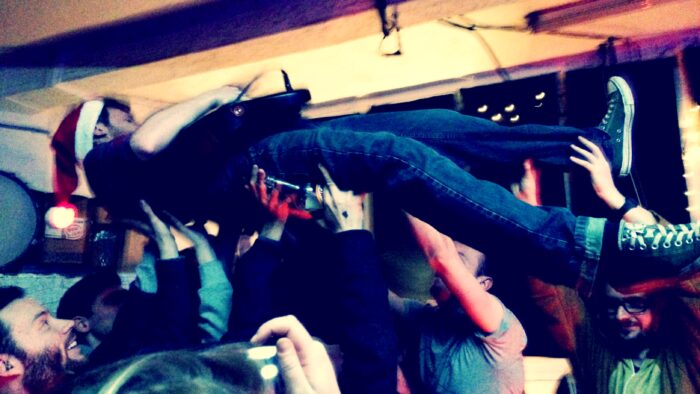 The DIY scene is growing stronger and when Pete Darrington caught four of the bands in Nottingham he felt he was witnessing the dawn of a new era of music, the beginning of real rock n roll.

I should have guessed I was in an alternative universe when my sat nav went berserk as I entered Sneinton in Nottingham.

Multiple expletives later I’ve ditched the car and I’m in what was once the heart of industrial Nottingham – it’s all old Victorian bonded warehouses and shadowy alley ways with not a soul in sight. It’s eerily like a scene from dystopian future movie ‘I Am Legend’ which is ironic because that’s one of the bands I’m here to see. Do you see what I did there?

The venue is J.T. Soars. It’s not even a venue. It’s an ex fruit and veg wholesale warehouse converted to a rehearsal space. But I can’t find it. It’s almost like it’s top secret – too cool for oldschool fools. Eventually, after stopping a beanie-hatted grunge kid in the street, I have the location of the hidden rebel base.

I arrive at a non-descript windowless metal fire door coated in peeling hammerite paint. This can’t be right surely? I open it and step into, well, frankly, Narnia.

I’m met by a guy in a Xmas jumper. I pay my measly entrance fee of £4 and step through into what looks like a glammed up version of the Torchwood headquarters. A couple of tired sofas compete for wall space with discarded pieces of sound equipment. A couple of house-clearance standard lamps and several strings of cheap fairy lights (hastily gaffer taped to the walls) are the only source of light. 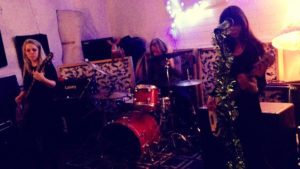 The room is heaving with kids. Boys with beards hold hands with girls in flowery dresses and Doc Martens. The number of tattoos in the room has reached critical mass. It feels like I’m on the lower east side of New York at some CBGB’s-style speakeasy. There’s a smell of teen spirit in the air.

These kids are excited – something amazing is about to happen. I’ve not witnessed anything like this for decades – in fact probably not ever in this country if I’m honest. I’m used to half empty rooms at the back of pubs hosting cool bands no one can be bothered to see. This is different. This feels like how I always dreamt a burgeoning underground music scene should feel.

There’s no stage. Just a carpet, a bunch of snaking four-way mains adaptors, a fuck off wall of massive amps and a couple of mic stands decorated in tinsel. Well it is Xmas.

A band called Cheap Jazz take to up attack positions as I hustle my way to the front. They’re from my home town, Derby. I’m instantly jealous they’re part of this secret velvet underground I know nothing about. Suddenly they’re deafening me with angular avant-garde spiky guitar riffs and semi automatic weapon staccato drum beats. No one sings. It’s instrumental. It’s challenging musically, but shit, the hooks, the riffs and the sheer power of their performance is astonishing.

The room full of twenty something indie darlings go mental. This just doesn’t happen any more, surely? I mean no-one knows who the fuck these guys are? Or do they? This can’t be happening. Like I said, this is Narnia. I feel privileged. I’ve been allowed an OAP bus pass into a world where kids go to gigs and love bands they don’t know. I’m frankly astonished.

While I’m still in shock the band I fell in love with just six short weeks ago (and the reason why I’m here) take to the carpet.

Dystopian Future Movies do exactly what it says on the tin. They make the soundtrack to non existent films about the end of the world. I think the youngsters surrounding me call it ‘nu-gaze’. (I may have made that up).

Imagine My Bloody Valentine covering the haunting music to Twin Peaks and you’re half way there. Front woman Caroline Cawley’s vocals soar with a choral quality while her guitar lines jump between a Slint-style chimes and Kevin Shields mowing the lawn with a chain saw. Cool as a cucumber bass girl Emily Azadpour underpins spine tingling riffs with simple tight melodic bass lines that Kim Deal would be proud of, while wild man of the woods Bill Fisher plays cool jazz one minute and then practices anger management on his drum kit the next.

They are adored and at the same time are adorable. They look cool as fuck. It seems effortless. It feels undeniably like a scene. An actual genuine underground music scene – DIY bands who put gigs on wherever they can find a room to hold their growing fan base. I want to cry at the beauty of it. I feel seventeen again and I’ve just discovered real rock n’ roll.

They’re followed by a band called Merrick’s Tusk who deliver no nonsense slabs of melodic hardcore that the crowd actually sing along with. It’s a micro Wembley Stadium. The three guys wielding guitars are dressed as reindeer, pulling Santa’s red drum kit (well, it is Xmas).

After that, there’s yet another plot twist in this unpublished CS Lewis masterpiece, Alright The Captain are suddenly fusing space rock with Daft-Punk moog lines and John Coltraine rhythms and the kids are just lapping it up. This just can’t be real, I think to myself, as the euphoria reaches fever pitch and the audience hoist the band’s frontman on to their shoulders and carry him round the room like a Messiah.

For the first time in god knows how many years I’m filled with optimism and excitement for real, underground music. None of these artists act like aloof rock stars; when they’re not on the stage (sorry, the carpet) they’re in the audience with everyone else, cheering their comrades on. It’s not competitive – there’s no arrogance. it’s inclusive. Everyone here just loves fucking great music.

As I climb back into my car to head home, I’m still coming to terms with what I just witnessed. It feels like the post-file sharing apocalypse is coming to an end; that the next generation has finally picked up the torch for great live music and is using it to raise your jaded cynicism to the ground.

Like all great dystopian future movies, the end of the beginning of a new era is symbolised by a fragile new day dawning, which is happening as I frantically type up my notes and I for one can’t wait for the sequel.

All words and images by Pete Darrington. You can read more of Pete’s pieces for Louder Than War here.