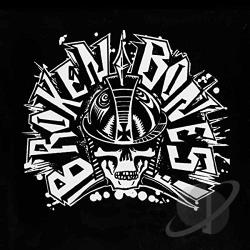 Self-titled 3CD boxset which combines the first four LPs by Discharge spin-off band Broken Bones, plus a live selection from London’s 100 Club….LTW’s Ian Canty assesses one of the bands often mentioned as a “pivotal influence” on Thrash Metal/Crossover for their own efforts for once….

I must be honest and admit that although, as I have alluded to previously, I was very interested in the 80s Punk scene, Broken Bones for some reason seemed to pass me by. I was aware of them, but sadly did not make much effort to find out more. I think one of the possible explanations for this may be that the UK Hardcore scene appeared to be being dragged down by glue-sniffing and apathy, this was not really attractive to me at all. I liked the more positive side of things, preferring Action Pact, Dead Man’s Shadow and the Newtown Neurotics who just offered a bit more in the way of hope from where I was viewing things back then. Which is no reflection on Broken Bones themselves of course, who could hardly be held to blame for the path selected by some of their followers and fellow travellers.

Broken Bones were formed by Anthony Roberts (or “Bones” as he was known) on leaving Discharge in 1983, the original band also featuring his brother Tezz (who was the original Discharge singer, playing bass in this band though) and as the years rolled by an ever-changing line up of supporting characters. On the evidence provided by this collection, it looks to me that at the time Bones’ band were on the ascendancy whilst Discharge wouldn’t quite reach the same heights they had before after he left, going through many different replacement guitar players and eventually ending up as a fairly undemanding Metal act. Though there was an undeniable Heavy Rock element to Broken Bones as well, they managed to keep true to their Punk roots with a political (with a small “p” mostly) and anti-establishment slant but also in other moments glorying in gory and gothic subject matter. Having that fresh start did give them the advantage of being able to progress properly, with the more Metallic trappings already in place, so it didn’t look like they were courting the Headbanging market in a calculated way. It felt more like a natural progression.

The first disc in this collection combines the debut album “Dem Bones” with a compilation of all the band’s early singles “Decapitated”. This really is Broken Bones’ prime era as they sought to combine their full-on Punk Rock assault with the kind of musical power that Lemmy and Motorhead had perfected in the preceding six years. Mostly they are is very successful in achieving that aim, with the fast and furious assault married to big, shouty choruses. I feel this is where they got the mix of the two genres just right, there is a grimy, rough creativity on show here. The song “Decapitated” itself, with its slower pace intro section, is probably the key track here; it even earns itself a reprise, or as it is listed “Pt 2”. “Seeing Through My Eyes” is excellent too, a thrilling white knuckle ride of a song. You really can feel that you are hearing the genesis of Speed Metal here: whether that was a good idea with hindsight is something for the individual to judge for themselves, but here, it works.

Confusingly the second disc presented here appears to reproduce the 1993 Fallout reissue of “F.O.A.D” (the original album came out in 1987) which included the 1986 “Bonecrusher” LP in its entirety starting halfway through (I’m no expert in this field, but both albums being a combination of studio and live recordings, the tracks taped “in concert” seem to have been shared by both). Whatever record they first appeared on, these songs marked Broken Bones progression to a more standard Heavy Rock sound though they didn’t abandon Punk altogether. The brevity of the songs and the vocals mean the band retained their Punk edge, along with harking back to their Hardcore roots on “Missing Link” and the actually quite catchy “Trampled Underfoot”, which showed how they embraced the Thrash Metal they undoubtedly had a hand in getting off the ground. Elsewhere some more standard hard rocking Metal elements rear their heads on the two title tracks, in the marching pace and squealing guitar solos of “Bonecrusher” and the definitely metallic intro to “F.O.A.D.”.

Happily though one can detect the changing times these two later records were a product of, the band never quite lose their identity and always remember where they came from both lyrically and soundwise. Punk was still in their DNA, though as one might suspect, the earlier record “Bonecrusher” on the whole is more orientated in that direction, whilst the “F.O.A.D.” tracks veer closer to the Rock mainstream. After the studio tracks, we’re treated to a decent sounding live selection of their early favourites with the Broken Bones’ patented attack sounding in full flight. It’s a bit like having the backing tracks of Slaughter and the Dogs played at 78 rpm whilst the vocals retain their pitch but are speeding up accordingly to a thousand words a minute, but better than that sounds.

Which brings us to disc three, the “Live At The 100 Club” LP which presents the band at a gig from 1984, but was originally released a year later on the Stoned label (I think this may have been a self-released LP). It is a pretty “rough as guts” recording, one step up from a bootleg really, but it does demonstrate that the band’s relentless thunder in the live setting could be truly something to behold. Bones’ flash and ferocious guitar is a true force of nature here, squeezing out notes at 100 mile an hour while the shrieked/shouted vocals, flailing drums and actually quite Funky bass somehow keep up. Though the early singles and LPs state Broken Bones’ case in a more aurally pleasing and dynamic way, this LP (which has to be here for completeness sake anyway) does suggest they were more than capable of providing a compelling spectacle in the live arena.

Broken Bones never got the plaudits of their forerunners Discharge, but this collection shows that they definitely had a eye to the future and something unique to offer. Whether they truly influenced the likes of Metallica is for others to say: me, I just think for the first singles and albums they were a nifty band in their own right and deserve respect for that apart from anything else.